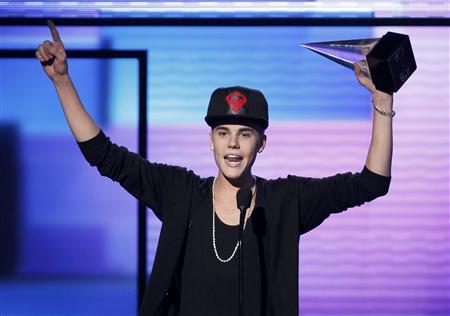 Bieber, 18, won all three categories in which he was nominated, including the night’s biggest award, artist of the year, over Rihanna, Katy Perry, Maroon 5 and Drake.

“This is for all the haters who thought that maybe I was just here for one or two years, but I feel like I am going to be here for a very long time,” Bieber said on stage, dedicating his first win of the night to his mother, Pattie Mallette, who accompanied him after his widely reported split from girlfriend Selena Gomez.

“It’s hard growing up with everything going on, with everyone watching me. I wanted to say that as long as you guys keep believing in me, I want to always make you proud,” Bieber said at the end of the night.

Bieber, who also won favorite pop/rock male artist and favorite pop/rock album for “Believe,” took to a bare stage to sing an acoustic stripped-down version of his latest single “As Long As You Love Me” before livening up the show with Nicki Minaj for “Beauty and a Beat.”

The American Music Award nominees and winners are voted online by fans, and the awards are handed out during a live three-hour broadcast featuring performances by artists.

Rihanna came away with one win. She couldn’t make the show because she is in Berlin, midway through a seven-day tour across seven cities around the world promoting her upcoming “Unapologetic” album.

“I am floored,” the singer said, thanking Bieber along with her fans in her acceptance speech.

Newcomer British-Irish boy bands One Direction, which had three nominations, and The Wanted, which had one nomination, went home empty-handed, losing out in the favorite pop/rock group category to well-established Los Angeles group Maroon 5.

“It’s wonderful also to see electronic music recognized at this level in the U.S.,” Guetta said in a taped acceptance speech.

Country-pop darling Taylor Swift, 22, scored the favorite female country artist award before performing her latest single “I Knew You Were Trouble” from her chart-topping album “Red,” on a masquerade ballroom-style stage with dancers in tuxedos, gowns and Venetian masks.

R&B star Usher kicked off the night with a medley of his hits on a laser-filled stage, while pop-rocker Pink teamed her performance of her latest single “Try” with a dramatic interpretive dance covered in paint with a male dancer on a stage filled with burning debris.

1990s ska-punk band No Doubt performed “Looking Hot” from their first album in a decade, “Push & Shove,” while rockers Linkin Park performed their latest “Burn It Down” after winning favorite alternative rock band over The Black Keys and Gotye.

Korean rapper Psy didn’t score any nominations, but he was named the AMA new media honoree for his viral hit music video “Gangnam Style,” accompanied by his trademark horse-riding dance.

The star closed out the show with his hit song, joined by surprise guest MC Hammer, one of the pioneering rappers from the 1980s, who was known for his catch phrase ‘Hammer Time.’

Singer Brandy paid tribute to the late Whitney Houston, who died suddenly at age 48 on the night before the Grammy Awards in February this year from accidental drowning.

AMA founder Dick Clark, who also passed away earlier this year, was given a touching tribute by veteran soul singer Stevie Wonder, who sang a medley of hits including “Hotter Than July” and “My Cherie Amour,” against a backdrop of pictures of Clark. Wonder was introduced by “American Idol” host Ryan Seacrest, who also paid homage to Clark’s influence.

“Dick loved the power of music and the ability to create pure joy,” Seacrest said.

The awards show, which marked its 40th anniversary this year, treated the audience to some of its greatest moments, including R&B star Beyonce performing “Single Ladies” at the 2008 show, Will Smith and DJ Jazzy Jeff at the 1989 awards show, and various clips of AMA regular, the late singer Michael Jackson. 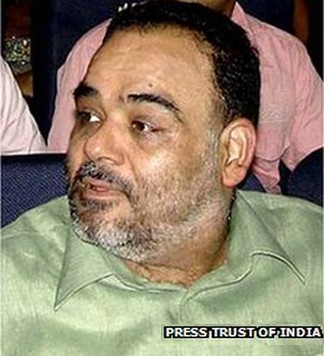 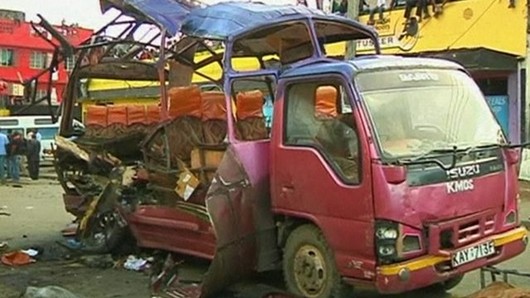