Jean-Claude Van Damme recently revealed that he had had an affair with “Street Fighter” co-star Kylie Minogue about 18 years ago and the woman who was his wife at the time, Darcy LaPier, says this is news to her.

The 51-year-old Belgian action star, dubbed “The Muscles From Brussels,” played Colonel William F. Guile in the 1994 film while Minogue, now 44, portrayed his assistant, Cammy. Parts of the movie were shot in Bangkok, Thailand.

“Yes. OK. Yes, yes, yes. It happened. I was in Thailand, we had an affair. Sweet kiss, beautiful lovemaking,” Van Damme was quoted as saying about Minogue to the UK newspaper The Guardian in an interview aimed at promoting his newest movie, “The Expendables 2.”

“It would be abnormal not to have had an affair, she’s so beautiful and she was there in front of me every day with a beautiful smile, simpatico, so charming, she wasn’t acting like a big star,” he added. “I knew Thailand very well, so I showed her my Thailand. She’s a great lady.”

Van Damme, and LaPier, his fourth wife and mother of his third child, wed at a Buddhist temple in Bangkok in February 1994. She filed for divorce that November, a month before the release of “Street Fighter.” LaPier also starred in the film, playing the actor’s character’s date.

The 47-year-old recently told Fox News, in response to The Guardian’s story: “I was shocked he would talk to the press about this all these years later to gain some notoriety. I didn’t know about it, I have had my feelings hurt and I feel betrayed.”

“There is a lot of water under the bridge between us, but the fact is I was pregnant with our son at the time,” she said. “He’s almost 17 now and I wouldn’t want him finding out all of this and being hurt by it.”

LaPier and Van Damme reconciled months after she filed for divorce and she gave birth to their son, Nicolas, in October 1995. The model and actress, who also has a daughter from a previous marriage, filed for divorce from Van Damme again in June 1997.

“The Expendables 2,” which features a slew of big action stars, hits theaters on Friday. Van Damme makes his debut in the franchise, as does Chuck Norris. The film also features Arnold Schwarzenegger in what marks his first major acting role since he ended his term as governor of California in 2010. He had a cameo in the first “Expendables” movie, which was released that year.

“I plan to see the ‘Expendables 2,'” LaPier told Fox News. “It looks like an amazing movie. I hope it does really well because he hasn’t paid child support in seven years. He thinks because he is now lives out of the U.S. he doesn’t have to pay what he owes.”

Van Damme has not responded to her remarks. Reps for the actor and Minogue had no immediate comment about the entire matter. The actor remarried his third wife, bodybuilder Gladys Portugues, who is now 54, in 1999. They have two adult children.

Minogue, known more for her pop music career, has been involved romantically with a co-star before. She dated Pauly Shore, who appeared with her in the 1996 film “Bio-Dome.” The singer and actress has been linked to Spanish model Andres Velencoso since 2008. 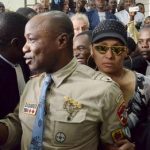 Insight: The Mittelstand – one German product that may not be exportable 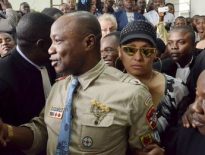