(Reuters) – As bad boy lead singer of the anarchic, trail-blazing and short-lived 1970s punk band the Sex Pistols, John Lydon (then Johnny Rotten) snarled and spat his way across a shocked society and music scene still pleasantly half-high from the mellow 1960s. 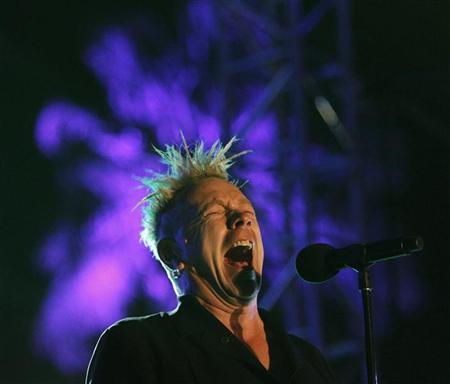 Never one to let the grass grow under his feet, Lydon left the Pistols in 1978 to form the more experimental – if less commercially successful – Public Image Ltd., and for the next 15 years the band’s shifting lineup released a dozen albums and toured the world.

PiL finally sputtered out in 1993, but now Lydon has revived the band, and he talked to Reuters about their new album, ‘This is PiL,’ their tour and how butter changed his life.

Q: It’s been 20 years since the last PiL album. Why did it take you so long?

A: “Not my choice. The record company and contract obligations kept me in a state of non-recoupment and I had to outwait them. It was a very difficult time for me, almost like a state of mental starvation. You’re gagging at the bit to work, and music’s my life. But I found that the law worked against me, all the corporations and accountants. So I had a very negative view of business-as-usual.”

Q: So what changed?

A: “Three years ago a British butter company approached me with the wonderfully loony idea of me promoting butter (laughs). How brilliant, I thought! Insane, right? Not bonkers money, but it got me working again. And I found everyone involved to be so honorable and decent that I was thrilled. And with that money, I put the band back together.”

Q: Were you a bit rusty, despite all the butter?

A: (Laughs) “I was well-buttered, and firstly we wanted to tour. That was important to get me chops and respect back. So we did two years touring, and gradually the idea of a new album came together, along with forming our own record label, PiL Official. And thanks to the tours, we were able to finance it all ourselves.”

Q: Is it true you recorded the album at Stevie Winwood’s studio?

A: “Yeah, it was the only place we could afford. It was his barn, in the middle of the Cotswolds, with nothing for inspiration but sheep – and I don’t like sheep particularly.”

Q: Did Stevie Winwood come to the sessions?

A: “He did, but only with one ear to the barn door, and then he pretended to be watering the daisies. So he never contributed, but it was great he rented us the studio.”

Q: How did the sessions go?

A: “Fantastic! The 30 years of heartbreak, arguments, problems, animosities and bad management have led to good management, good interaction between band members and a wonderful sense of freedom. It’s been worth the wait. So now I view myself as 50 years young. And the next 50 are going to be nothing but gems.”

A: “Great. We’ll start in America in September and I can’t wait. Everyone gets on and it’s a healthy working relationship. I didn’t know there was any such thing! Look at my past. I started in a band that all hated each other apparently, and it’s taken me this long to learn what I’m doing and get it all in order. But we’re working on hatred. We’ll get to that on the next record (laughs).”

Q: What’s your view of the music business today?

A: “There isn’t one. The record companies fell apart – quite deservedly. Their corrupting, all-binding contract nonsense had to stop. But this modernization of sampling and regurgitating of old ideas isn’t healthy either. Live music is healthy.”

Q: What about TV shows like “American Idol” and “The Voice”?

A: “They’re dragging us back into Las Vegas wannabes. And there’s the painful tone of humiliation, the smirking at who gets voted off. And people now think that’s the universe of music. That’s utterly corrupting too.”

Q: Back in ’77, London’s punks protested the Queen’s Silver Jubilee celebrations and the Sex Pistols famously performed “God Save the Queen” sailing down the Thames, mocking her river trip. Ironically, she’s outlasted all the punks and now it’s her Diamond Jubilee. Are you still anti-monarchy?

A: “I never was. But if I’m expected to pay taxes for this kind of hierarchy that demands my oath of obedience, then I’m going to be telling it what to do with my money. Simply said, but simply believed. That’s a concept not fully understood 35 years ago. But I was right, wasn’t I.” Celebrity Queen Latifah Comes Out As A Lesbian