Rita Ora apparently wants to make it known that she is taking precautions to prevent another nip-slip, baring her bra in a see-through top today outside the Radio 1 studios.

The ‘Shine Ya Light’ singer wrapped up warm in the winter cold donning a bright purple hooded bomber jacket, leather trousers and trainers, but still sexed up her outfit wearing a see-through black top.

One person who would appreciate Rita’s outfit is One Direction’s Niall Horan who recently admitted he has a crush on the singer. When a friend asked Niall if he fancied Rita, the singer replied on Twitter: “@ClaireKourtney_ yeh rita is incredible.”

The 21-year-old was forced to apologise recently for exposing her boobs on stage earlier this month while performing at the Red Bull Culture Clash.

“Yes. It’s true. I got straight off a motorbike from O2 to Wembley, I didn’t have time to change,” Rita tweeted.

“I didn’t have time to change and then all of a sudden the zip got lower and lower, I rushed on stage and pop! It happened, f**k!”

“Sorry guys (How embarrasing). Apologised! Despite that amazing show! 🙂 LOL,” she continued. Rita now admits that her mother gave her a scolding for not wearing a bra in public.

“It was just embarrassing. The same thing happened at Lovebox festival (in London) in the summer so this time I had to call my mum before she saw it online,” Rita told The Sun. “She just said, ‘For God’s sake! When are going to start wearing a bra, Rita?’ I had an outfit and t** tape ready but didn’t have time to change.”

Rita appeared to be in good spirits during her Radio 1 visit despite partying until the early hours with P. Diddy in London last night.

The Roc Nation songstress was spotted in VIP of DSTRKT nightclub with the hip-hop mogul and his girlfriend Cassie as they knocked back bottles of Ciroc vodka, obviously on the house given Diddy’s partnership with the alcohol brand.

According to Entertainmentwise’s eyewitness, Rita spent the majority of the evening chatting it up a storm with Cassie and were also spotted on the dancefloor. 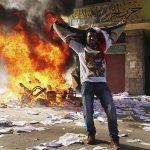 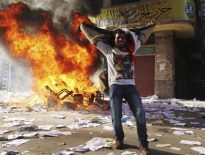