(Reuters) – Faced with a new surging rival, Republican presidential candidate Mitt Romney is returning to a familiar playbook to try to put down what may be his toughest challenge yet in opponent Rick Santorum. 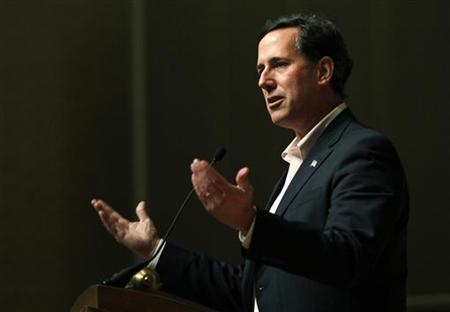 Negative ads by Romney worked to fend off the challenge of Newt Gingrich in recent weeks, and more are in the works against Santorum – although it’s unclear how successful they will be.

In a clear sign that attack ads are looming, the pro-Romney “Super PAC” Restore Our Future has notably ramped up its TV advertising in several states including Michigan.

The Romney campaign itself also started buying air time on Tuesday in Michigan, the main battleground of a looming fight between the two Republican frontrunners in a February 28 primary.

“If they follow what they’ve done in the past, Rick Santorum won’t recognize himself when he looks in the mirror,” said Dave Carney, a Republican strategist who worked for Texas Governor Rick Perry’s presidential campaign. “He’ll get the stuffing knocked out of him over the next two weeks.”

Romney backers will also call attention to Santorum’s time in the U.S. Senate, when he supported government “earmark” projects that conservatives see as wasteful spending, such as Alaska’s widely ridiculed $400 million “Bridge to Nowhere.”

A senior Washington Republican who helps the Romney campaign said negative ads “move numbers, and as long as they move numbers, people will be using them.”

Political action committees (PACs) are groups with great clout in U.S. politics that are legally separate from candidates but often spend freely to buy negative advertising against rivals of the politicians they support.

Santorum, a former Pennsylvania senator, may not be as easy a target. He does not carry the same heavy baggage as former House of Representatives speaker Gingrich, and his support for government spending projects was shared by many Republicans in Congress competing for tax dollars for their home states.

“The negativity in and of itself is not going to win,” said Carney. “I think (Romney) needs to have a positive message, talking about his values and what he wants to do.”

The Republican candidates are engaged in a state-by-state battle for their party’s nomination to challenge President Barack Obama, a Democrat, in the November 6 general election.

A tough fight lies in economically battered Michigan, where Santorum has gained traction with a blue-collar appeal in a state centered around the auto industry.

Romney is emphasizing his home-town roots as the son of a popular former Michigan governor who once led the now-defunct American Motors, George Romney.

“I want to make Michigan stronger and better. Michigan has been my home and this is personal,” Romney says from behind the wheel of a car in a new ad airing in the state.

To flesh out his economic agenda, Romney is expected to lay out some tax reform proposals in a major economic speech in Detroit on February 24. It is likely to include provisions to reduce tax rates and limit tax deductions, Republicans said.

Campaign advisers say Romney’s approach in the next few weeks of campaigning is to talk up his conservative credentials, as he did at a major conference in Washington last week, to try to undermine Santorum.

Romney is struggling to win over conservative voters in Michigan and Arizona, where he needs wins to build momentum ahead of March 6, the 10-state “Super Tuesday” jackpot.

A new CBS News/New York Times national poll concluded on Tuesday that Santorum’s momentum is real, based on his victories a week ago in Colorado, Minnesota and Missouri.

It gave the former senator a slight edge over Romney among Republican voters, 30 percent to 27 percent, and Republican strategists say Romney has little choice but go after Santorum.

“He can’t let this thing unravel at this point in time,” said Ed Rollins, a former campaign manager for Minnesota Representative Michele Bachmann. “I think the key thing is he’s got to use whatever it takes to win.’

“Rick was a member of the (Senate) leadership. He went along to get along with earmarks and voting for appropriations bills and those kinds of things,” said an informal Romney adviser, Charlie Black.

“He was outspoken on social issues, that’s true, but the voters this time are not looking for a Washington insider.”

Santorum’s 1998 Senate vote to confirm liberal Sonia Sotomayor to a U.S. appeals court a decade before Obama elevated her to the Supreme Court is likely to be in focus.

Romney may see benefits in Arizona from the slice of the population that shares his Mormon faith, and he can also count on Arizona Senator John McCain to campaign for him there.

To try to attract conservatives who worry he is a moderate, Romney has been playing up his record as governor of Massachusetts, where he balanced the state’s budget.

He is talking less about his experience as a private equity executive at Bain Capital, where he built his multi-million-dollar fortune.

“If there was a program, an agency or a department that needed cutting, we cut it,” Romney told conservatives last week of his time as governor.