(Reuters) – Mitt Romney’s presidential hopes may have been shaken up when an aide compared his campaign to an Etch A Sketch toy, but the publicity blitz has been a delightful surprise for the U.S. makers of the well-known erasable children’s art tablet. 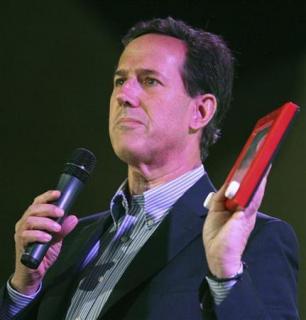 Republican presidential candidate and former U.S. Senator Rick Santorum holds up an "Etch-a-sketch" while addressing supporters at a "Get Out The Vote" rally in Mandeville, Louisiana March 21, 2012. REUTERS/Sean Gardner

Ohio Art, the low-key, family-run company that has made Etch A Sketch for half a century, saw its sales of the toy soar 1,556 percent above normal levels on Amazon.com within 24 hours of the gaffe.

Senior Romney adviser Eric Fehrnstrom was speaking about what would happen if Romney won the Republican nomination and faced President Barack Obama in the November election when he drew what has become an unfortunate comparison for Romney.

“You hit a reset button for the fall campaign,” Fehrnstrom told a CNN interviewer on Wednesday. “Everything changes. It’s almost like an Etch A Sketch. You can kind of shake it up, and we start all over again.”

Romney’s rivals – Republicans and Democrats alike – seized on the comment as proof the Republican frontrunner was a flip-flopping waffler whose positions on issues such as healthcare were not to be trusted.

His Republican opponents gleefully waved the $12.99 red plastic toy, which lets children make drawings they can then erase by shaking it.

“I am not the Etch A Sketch candidate!” Romney challenger Rick Santorum declared to supporters.

On television, Etch A Sketches took over cable newsrooms.

“I wish we could erase the U.S. debt,” one commentator said as he fumbled with the plastic knobs.

For Ohio Art, the attention has been manna from toy heaven.

“It’s kind of like a Bill Clinton-Monica Lewinsky amount of media interest,” says Bill Southard, who has been doing Etch A Sketch’s promotions for the past 18 years.

“This is the kind of publicity flurry you usually only see in a crisis or a product malfunction.”

Ohio Art President Larry Killgallon was sitting in a meeting in the Chicago office of Bruce Lund, the inventor of last year’s hit toy, Doggie Doo, on Wednesday when he noticed that his iPad was being blitzed with emails, and his cellphone started ringing.

“I’ve never seen anything like this,” said Killgallon, dazed from a 24-hour publicity blitz. “Our target audience is four-to-eight year olds.”

The first Etch A Sketch rolled off Ohio Art’s production line on July 12, 1960, when Larry and Bill’s dad was helping run the place.

By the 1990s, production had moved to China and Etch A Sketch remains Ohio Art’s No. 1 selling toy.

In between interviews, they decided to send each candidate a box of Etch A Sketches, but the Obama administration missed out.

Larry Killgoran describes the clan as right-leaning but free-thinking.

“It’s like the Etch A Sketch. There’s both a left and a right knob and if they work together they can draw a circle,” Killgoran says of the U.S. political situation.