(Reuters) – Tropical Storm Isaac had nearly reached hurricane strength as it bore down on the U.S. Gulf Coast on Tuesday and appeared to be taking direct aim at New Orleans, almost seven years to the day since the Crescent City was devastated by Hurricane Katrina. 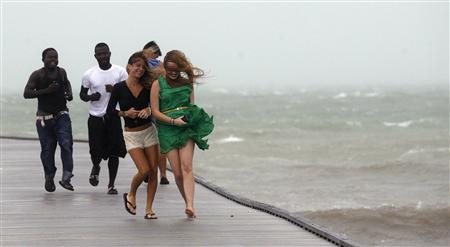 A group of people run back to shore along a pier in high wind and rough surf as Tropical Storm Isaac moves over Key West August 26, 2012. REUTERS/Andrew Innerarity

“Isaac is likely to become a hurricane later today. Additional strengthening is forecast until the center moves inland,” the center said in its 4 a.m. CDT (0900 GMT) advisory.

Rain and tropical storm force winds were expected to spread into the region in the coming hours, bringing the threat of storm surge and flooding.

Isaac had New Orleans in its sights as the city still struggles to recover from Hurricane Katrina which swept across it almost exactly 7 years ago on August 29, 2005, killing more than 1,800 people and causing billions of dollars of damage.

Authorities urged thousands of residents in low-lying areas to evacuate, warning the storm could flood towns and cities in at least three U.S. Gulf Coast states with a storm surge of up to 12 feet.

Isaac also threatened heavy rainfall, with possibly as much as 18 inches (46 cms) in areas, potentially triggering flooding in some coastal areas.

Residents in coastal communities from Louisiana to Mississippi stocked up on food and water and tried to secure their homes, cars and boats.

In New Orleans, a bumper-to-bumper stream of vehicles left the city on a highway toward Baton Rouge in search of higher ground. Others prepared, or were forced, to ride the storm out.

The storm was forecast to strengthen into a Category 1 hurricane, the lowest on the Saffir-Simpson scale, with top winds of 90 miles per hour. While that would be well below the intensity of Katrina, a Category 3 storm, the size of Isaac’s slow-moving system has forecasters predicting widespread flooding.

“Even if it is a tropical storm at landfall, the large size of it will still generate significant storm surge,” Hurricane Center Director Rick Knabb told reporters. “That is life-threatening potentially.”

Along Canal Street in New Orleans’ historic French Quarter, crews were boarding up the windows of stores and businesses.

“I’m not all that concerned about the storm. It’s still a Category 1,” said Charles Neeley, a 69-year-old contractor overseeing workers covering the windows of a CVS drugstore.

“We usually ride out ones and twos, and get the hell out for threes and fours.”

Nonetheless, Neeley said he had stocked up on food and water at home and fuel for his generator.

“Our flights were canceled so we’re going to be here,” said Karen Foley, a 23-year-old tourist who had planned to travel home to New Jersey with a friend. “We are just hoping the city doesn’t get hit again. It doesn’t deserve it.”

Isaac was centered 125 miles southeast of the mouth of the Mississippi River with top sustained winds of 70 miles per hour – a speed that places the storm very near hurricane status – and swirling northwest at 12 mph.

The storm was more than 400 miles wide. Craig Fugate, director of the Federal Emergency Management Agency, said the worst effects may well be in Mississippi and Alabama.

Isaac killed at least 22 people and caused significant flooding and damage in Haiti and the Dominican Republic before skirting the southern tip of Florida on Sunday.

After Katrina, the U.S. Army Corps of Engineers built a $14.5 billion defense flood system of walls, floodgates, levees and pumps designed to protect the city against a massive tidal surge like the one that swamped New Orleans in Katrina’s wake.

In low-lying Plaquemines Parish, which could be the first to be lashed by Isaac’s winds and storm surge, workers scrambled to stack sandbags and reinforce levees as Isaac lurked in the Gulf.

Much of the parish lies outside the greater New Orleans levee system, and construction projects to bolster protection are not yet complete.

“We’re really worried about the storm surge. We really need a few more years before we see an event like this,” said Plaquemines Parish President Billy Nungesser.

Oil firms ferried workers in helicopters from oil platforms hundreds of miles offshore in the Gulf of Mexico.

As a precaution, as of Monday afternoon, the energy industry had shut down 78 percent of Gulf of Mexico crude production and 48 percent of its natural gas production, government figures showed.

Despite the threat to the U.S. offshore oil patch, which produces about 23 percent of the country’s oil output and 7 percent of its natural gas, prices for international benchmark Brent crude traded down $1.24 to $112.35 a barrel in late Monday activity.

Once ashore, the storm could wreak havoc on low-lying fuel refineries along the Gulf Coast that account for about 40 percent of U.S. refining capacity.

The ports of Mobile and New Orleans were closed and barge traffic was suspended along southern portions of the Mississippi River. 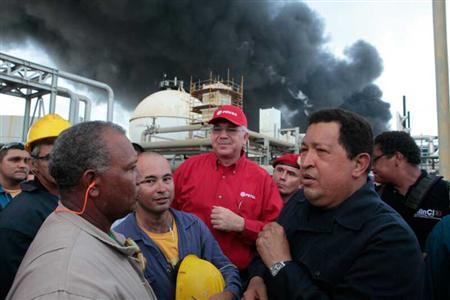 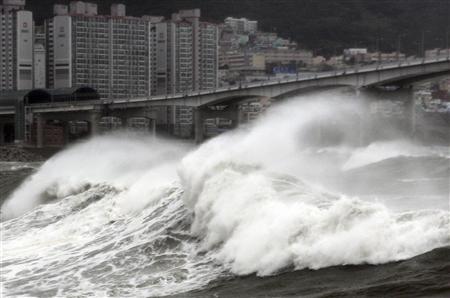