By Diadie Ba and Mark John

DAKAR (Reuters) – President Abdoulaye Wade said on Monday he was leading a tight election race with his main rival, Macky Sall, as unofficial vote tallies pointed to a possible run-off between the two for the leadership of Senegal. 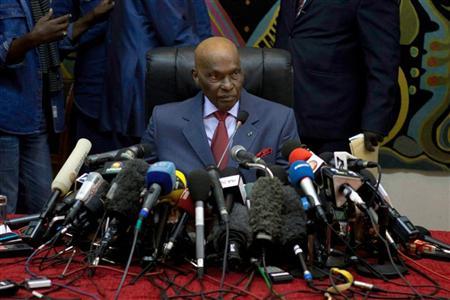 Senegal's President Abdoulaye Wade speaks to journalists at a news conference in Dakar, February 27, 2012. Wade was locked in a tight race with his main rival, Macky Sall, on Monday as unofficial vote tallies pointed to a possible run-off between the two for the leadership of one of West Africa's most stable countries. REUTERS/Joe Penney

But while Sall insisted a run-off was “inevitable”, Wade announced he was leading the contest with half the votes counted by nearly 7 points and said a straight first-round victory for him or a deciding second round were both possible outcomes.

The close race in Sunday’s election followed weeks of violent street protests against the 85-year-old Wade’s bid for a third term in office – despite a two-term limit – and international warnings that West African country’s reputation as a relatively peaceful democracy hangs in the balance.

Saying that around half of the total votes had been counted, Wade told a news conference at the presidential palace in Dakar he appeared to be leading Sall by a little more than 32 percent compared to just over 25 percent for his rival.

“Everything is therefore possible, victory or a second round,” Wade said, reading a written statement. He added his ruling PDS party would explore all possible political alliances if a run-off was required. He took no questions.

Before the vote, Wade had exuded confidence he would get the more than 50 percent score needed for a first-round victory, and so avoid a second round in which political opponents of all stripes would likely urge their supporters to vote against him.

“Figures at our disposal indicate a second round is inevitable,” Sall, a former prime minister for Wade and fellow economic liberal, earlier told Reuters, adding that partial tallies showed Wade on 32 percent and him on 28 percent.

At the packed news conference, Wade praised what he called the “transparent, democratic and peaceful” vote on Sunday, saying it showed Senegal’s democracy was still in good health.

Wade, a veteran of years in opposition before he took power in 2000, has touted infrastructure projects including new roads and an airport as major achievements. But many Senegalese say their lives have if anything become harder in the past decade.

The vote has been the most contentious in Senegal’s recent history, with Wade critics arguing he has no right to stand and fearing his allies will rig victory. Wade accuses the opposition of resorting to a smear campaign because of a lack of policy proposals.

A poor country on Africa’s western tip with few exploitable resources, the former French colony prides itself on its political stability and a tradition of religious tolerance between majority Muslims and other faiths. Observers said Sunday’s vote was calm and broadly well organised.

Related:  The final episode of a stowaway's story
Powered by Inline Related Posts

Boubacarr Wassa, a lifelong Socialist, said he would vote for the centrist Sall in a second round if Socialist candidate Tanor Dieng – who is seen struggling to win 10 percent of the vote – gave Sall a clear endorsement.

“I am a Socialist and I will die a Socialist, but would vote for Macky,” the Dakar newspaper vendor told Reuters.

Moustapha Niasse, 72, another ex-ally of Wade turned rival, said a coalition against Wade in the second round was a must.

“Stopping Wade is an imperative, it is a necessity, this is a must,” Niasse, who was third placed with 13 percent according to partial tallies, told French RFI radio.

On Sunday, scores of voters booed Wade as he cast his ballot at his home precinct in an upscale neighbourhood of the capital Dakar. He was ushered away by aides without giving a statement.

Yet prospects can change rapidly, with Wade claiming strong support in rural areas where figures may be slower to come in.

Senegal is the only country in mainland West Africa that has not suffered a coup since independence and previous elections have gone mostly smoothly, a record it has worn as a badge of democratic distinction.

But the run-up to this election was tense.

Wade’s rivals argued he should not have been allowed to stand because of the two-term limit, but he countered that that rule was brought in after he took power in 2000, so his first term should not count.

Senegal’s top legal body approved Wade’s candidacy in late January, triggering a wave of clashes between rock-throwing protesters and police firing teargas and rubber bullets in which at least six people were killed.

Sall, 50, is a former Wade protege who held several senior posts, including minister of energy and mines, minister of the interior, and prime minister, before falling out with Wade and resigning in 2008.

He was among several opposition figures active in the M23 protest movement, named after an anti-Wade riot on June 23 last year, which organised near-daily demonstrations before the vote.

While much smaller than the Arab street movements that brought down rulers in Tunisia and Egypt last year, the emergence of a young, more politically emboldened generation of Senegalese has been a feature of the vote.

“The electorate have completed the work started by the M23 movement, which clearly told Wade that it was unthinkable that a president can be voted into office with 25 percent of the vote,” said local political analyst Yaro Dia.

Wade’s proposal last June to create a first-past-the-post election in which it was possible for a candidate to claim victory with a minimum 25 percent of the vote sparked the initial wave of street protests. He quickly abandoned the idea.