(Reuters) – The neighborhood watch volunteer who shot dead an unarmed black teenager in Florida appeared uninjured when he was brought into the police station on the night of the shooting, according to a video released by ABC News on Wednesday. 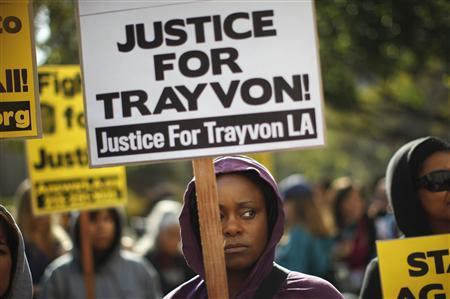 Ebony Fay holds up a sign during rally preceding the Million Hoodies March, to protest the failure of police to arrest a Florida neighborhood watch volunteer for shooting to death an unarmed black teenager, Trayvon Martin, in Los Angeles, California, March 26, 2012. REUTERS/David McNew

George Zimmerman told police he shot Trayvon Martin inside a gated community on February 26 in self-defense after Martin attacked him and repeatedly bashed his head into a concrete walkway.

Police have declined to arrest Zimmerman, triggering nationwide protests from citizens, politicians and entertainers who argue that Zimmerman, who is half white and half Hispanic, found the 17-year-old Martin suspicious and followed him because he was black.

Police at the scene said the 28-year-old shooter was bleeding from the nose and the back of the head, and Zimmerman’s lawyer said his client suffered a broken nose from Martin’s punch.

But no blood or bruising is visible in the video taken by a police surveillance camera that shows uniformed officers leading a handcuffed Zimmerman into the police station, nor are there blood stains visible on his clothes.

ABC obtained the video from Sanford authorities, who said it would be made available on the city’s website.

Zimmerman appears much leaner in the video than in the image that has been in the media, a 2005 mug shot taken after his arrest for a confrontation with a police officer. His head is almost completely clean shaven in the video, offering a clear view of the back, which shows no discoloration.

“This certainly doesn’t look like a man who police said had his nose broken and his head repeatedly smashed into the sidewalk,” said Benjamin Crump, a civil rights lawyer representing Martin’s family who has been calling for Zimmerman’s arrest for weeks.

Zimmerman’s attorney, Craig Sonner, did not respond to a request for comment.

Zimmerman was treated by the fire department at the scene, which raises the possibility first aid stopped any bleeding. The quality of the video also was not clear enough to determine he suffered no injuries whatsoever.

In a separate development, Zimmerman’s father said in a television interview that Martin, during the fight, had threatened to kill George Zimmerman upon discovering he was armed. Zimmerman had a license to carry a concealed weapon.

Witnesses report hearing an altercation, and one neighbor said he saw Martin getting the better of Zimmerman in the fight before the shot went off. But Martin’s mother says she recognizes cries for help on a 911 tape as her son.

Zimmerman told a police operator before the shooting he found Martin to be suspicious, though he ignored the operator’s admonition against following Martin.

“We have heard the 911 tapes with our own ears and now we have seen the video with our own eyes,” Crump told Reuters. “For whatever reason, the Sanford Police Department and the state attorney have conspired to sweep the death of Trayvon Martin under the rug.”

“Don’t take my word for it. Just look at the video. I leave it for America to judge,” the lawyer said.

Sanford’s police chief resigned temporarily in the face of criticism of the handling of the case, which is under review by the U.S. Justice Department.