SHAWNEE, Okla. (AP) — Hearing on the radio that a violent storm was approaching her rural Oklahoma neighborhood, Lindsay Carter took advantage of the advanced warning, gathered her belongings and fled. When she returned, there was little left of the community she called home. 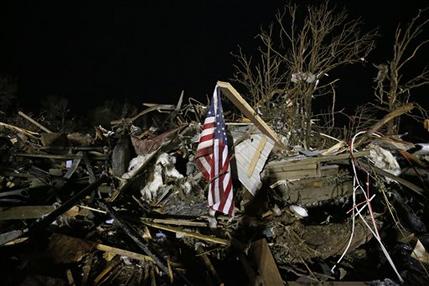 A flag flies in the debris of a mobile home after a tornado struck a mobile home park near Dale, Okla., Sunday, May 19, 2013. (AP Photo Sue Ogrocki)

Several tornadoes struck parts of the nation’s midsection Sunday, concentrating damage in central Oklahoma and Wichita, Kan. One person was killed near Shawnee, Okla., and 21 injuries were reported throughout the state.

Victims and emergency responders might not get much of reprieve as the National Oceanic and Atmospheric Administration’s Storm Prediction Center was forecasting similar weather for Monday over much of the same area.

The worst of the damage Sunday appeared to be at the Steelman Estates Mobile Home Park located amid gently rolling hills about 35 miles southeast of Oklahoma City.

“It took a dead hit,” resident James Hoke said. Emerging from a storm cellar where he sought refuge with his wife and two children, Hoke found that their mobile home had vanished. “Everything is gone.”

Hoke said he started trying to help neighbors and found his wife’s father covered in rubble.

“My father-in-law was buried under the house. We had to pull Sheetrock off of him,” Hoke said.

“There was a possibility a lot more people could have been injured,” Booth said. “This is the worst I’ve seen in Pottawatomie County in my 25 years of law enforcement.”

Carter had heard on a radio broadcast that a storm that had originated southwest of Oklahoma City was headed toward Shawnee.

“We got in the truck and left,” Carter said. With upward of 30 minutes’ notice for Pottawatomie County, Carter had time to leave one of the few frame homes in Steelman Estates – and most of her house was intact when she returned.

“I walked up, and the house was OK. Part of the roof was gone,” she said.

The scene was different a short distance away.

“Trees were all gone. I walked further down and all those houses were gone,” she said.

Booth said a 79-year-old man was found dead out in the open at Steelman Estates, but the sheriff didn’t have details on where he had lived.

“You can see where there’s absolutely nothing, then there are places where you have mobile home frames on top of each other, debris piled up,” Booth said. “It looks like there’s been heavy equipment in there on a demolition tour.

Tornadoes were reported Sunday in Iowa, Kansas and Oklahoma as part of a storm system that stretched from Texas to Minnesota.

Following the Oklahoma twisters, local emergency officials went from home site to home site in an effort to account for everyone. Keli Cain, a spokeswoman for the Oklahoma Department of Emergency Management, said that, many times in such situations, people who are not found immediately are discovered later to have left the area ahead of the storm.

A storm spotter told the National Weather Service that the tornado left the earth “scoured” at the mobile home park. At the nearby intersection of Interstate 40 and U.S. 177, a half-dozen tractor-trailers were blown over, closing both highways for a time.

“It seemed like it went on forever. It was a big rumbling for a long time,” said Shawn Savory, standing outside his damaged remodeling business in Shawnee. “It was close enough that you could feel like you could reach out and touch it.”

Gov. Mary Fallin declared an emergency for 16 Oklahoma counties that suffered from severe storms and flooding during the weekend. The declaration lets local governments acquire goods quickly to respond to their residents’ needs and puts the state in line for federal help if it becomes necessary.

Heavy rains and straight-line winds hit much of western Oklahoma on Saturday. Tornadoes were also reported Sunday at Edmond, Arcadia and near Wellston to the north and northeast of Oklahoma City. The supercell that generated the twisters weakened as it approached Tulsa, 90 miles to the northeast.

“I knew it was coming,” said Randy Grau, who huddled with his wife and two young sons in their Edmond home’s safe room when the tornado hit. He said he peered out his window as the weather worsened and believed he saw a flock of birds heading down the street.

“Then I realized it was swirling debris. That’s when we shut the door of the safe room,” said Grau, adding that they remained in the room for 10 minutes.

In Wichita, Kan., a tornado touched down near Mid-Content Airport on the city’s southwest side shortly before 4 p.m., knocking out power to thousands of homes and businesses but bypassing the most populated areas of Kansas’ biggest city. The Wichita tornado was an EF1 on the enhanced Fujita scale, with winds of 110 mph, according to the weather service.

Sedgwick County Emergency Management Director Randy Duncan said there were no reports of fatalities or injuries in Kansas.

There were also two reports of tornadoes touching down in Iowa on Sunday night, including one near Huxley, about 20 miles north of Des Moines, and one in Grundy County, which is northeast of Des Moines, according to the Des Moines Register. There were no immediate reports of major damage or injuries.

In Oklahoma, aerial television news footage showed homes with significant damage northeast of Oklahoma City. Some outbuildings appeared to have been leveled, and some homes’ roofs or walls had been knocked down.

In Katie Leathers’ backyard in Edmond, the family’s trampoline was tossed through a section of fence and a giant tree uprooted.

“I saw all the trees waving, and that’s when I grabbed everyone and got into two closets,” Leathers said. “All these trees just snapped.” 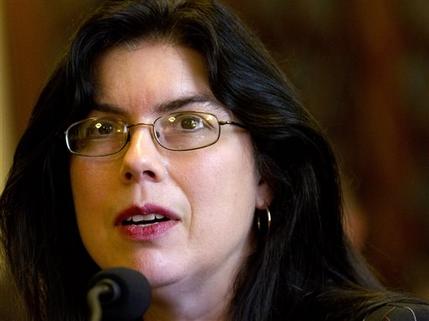 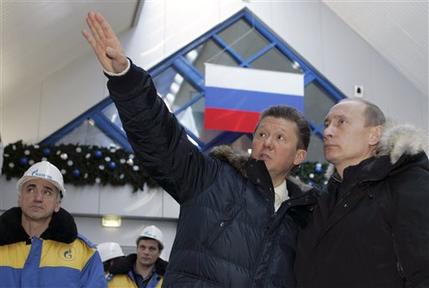