LONDON (Reuters)- No sooner are Europe’s debt anxieties easing a touch than a sharp rise in oil prices threatens to impede the economy’s tentative recovery from the euro’s near-death experience with Greece. 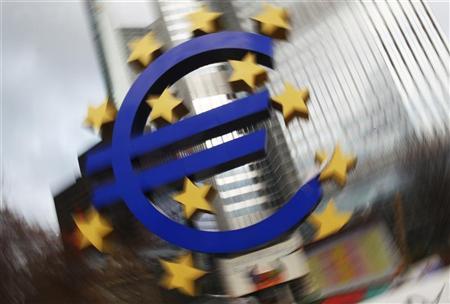 The Euro sculpture is pictured in front of the headquarters of the European Central Bank (ECB) in Frankfurt January 24, 2012. REUTERS/Lmar Niazman

Brent oil has shot up about 20 percent since mid-December on concern over cuts in Iranian supply, and set an all-time high this week in euros.

Oil has not reached a level that poses a grave danger to growth, economists say. In dollars, today’s price around $123 is still below last April’s $127 high, let alone the record peak of $147 scaled in 2008.

But the risk is that consumers and companies, their confidence still fragile, will crawl back under the covers.

“This comes at a difficult time for the euro area economy, which I would still characterize as being in a state of mild recession despite one or two more promising signs,” said Julian Callow, an economist at Barclays Capital in London.

“If we were to see a rapid, sudden escalation in the oil price, then for sure it would be a factor that would lead us to be revising down our projections for euro area growth and, if sustained, could make a mild recession turn into something more serious,” he said.

Picking a precise pain threshold is tricky, but prices are approaching the danger zone.

Andrew Milligan, head of global strategy at Standard Life Investments in Edinburgh, said he would not be too worried by another $10-15 rise in the oil price in dollar terms for dollar-based industries. But it would be a different matter if oil climbed above $140 a barrel and stayed there.

“Corporate profits are already not that strong already and, although some parts of the stock market would benefit, self-evidently, the negative impact on the wider economy and on domestic profits would become quite noticeable,” Milligan said.

Economists at JP Morgan said the recent price run-up brings it closer to becoming the largest immediate potential pitfall for the European and global economies.

“No doubt, some of the move reflects the improving growth outlook. But should Brent jump to near $130 a barrel owing to supply fears, the damage would offset the upside seen in the data to date,” they said in a note.

Europe is more vulnerable than the United States, which is showing signs of economic recovery and is also benefiting from tumbling natural gas prices.

However, the correlation between shifts in oil prices and growth is complicated.

As Reuters columnist John Kemp points out, the work of U.S. economist James Hamilton shows that price rises are more likely to affect the economy if they set a new high beyond what consumers and firms have already lived through, rather than just reversing earlier declines.

That is consistent with what happened in 2010/2011. Brent crude rose more than 75 percent between late August 2010 and mid-April 2011. Economic growth duly slowed, but oil was simply rebounding from a slump to $40 in late 2008 after the collapse of Lehman Brothers sent the world economy into a tailspin: the recession some economists had expected did not occur.

With Brent setting new highs expressed in euros, Europe is suffering an “oil shock” on Hamilton’s criteria. But the net increase in February compared with the previous 12 months is just 4 percent, Kemp calculates, limiting the impact.

The blow to European consumers will be further cushioned because taxes account for a bigger chunk of the price at the pump than does the cost of crude.

Other structural factors are at work, too, which may dampen the impact of an oil price spike.

“Oil consumption in Europe has been in decline for some time as a result of falling consumption of oil by the power-generation sector, increased efficiency and conservation and relative saturation in the regional automotive market,” said Caroline Bain, a commodities analyst at The Economist Intelligence Unit.

On the flip side, euro zone consumers are not only paying record local-currency prices for oil but they are not getting the break Americans are enjoying from sharply lower natural gas prices, which plumbed a 10-year low in January.

The European Commission on Thursday scrapped its forecast of 0.5 percent growth this year in the euro zone and said the bloc was likely instead to shrink by 0.3 percent [ID:nB5E7JV02E]. A day earlier, an index based on a survey of euro zone purchasing managers slipped back below the line demarcating growth from contraction. [ID:nL4E8DM5GR]

“With concerns about a Greek default likely to rumble on and further austerity measures coming elsewhere in the region, the European economy is more vulnerable to shocks of all kinds – including higher oil prices,” Julian Jessop, chief global economist at Capital Economics in London, said in a note.

GET USED TO IT

Concern about a disruption to Iranian oil shipments has been a principal driver of the recent price rally. If the fears were to materialize, equities would probably tumble, hitting the global economy through the confidence and wealth channels as well as through a direct squeeze on disposable incomes.

Ian Taylor, head of the world’s leading oil trader, Vitol, said this week that any strike on Iran’s nuclear sites would likely push oil prices to $150 a barrel, at least temporarily.

“The market is intensely worried about a geo-political supply-side shock and that would certainly be sufficient to cause investment risk to come off the table quickly,” said Milligan at Standard Life Investments.

Looking past the near-term uncertainty surrounding Iran, Andrew Sentance, a former member of the Bank of England’s Monetary Policy Committee, said high and fluctuating prices for energy were part of a “new normal” economic climate in which Asia is the main engine of global growth.

Periodic bursts of inflation would add to the volatility of what was likely to be disappointing growth in the West for quite some time, according to Sentance, a senior economic adviser to PricewaterhouseCoopers, an accounting and advisory firm.

“This strong growth in Asia and other emerging markets is putting considerable pressure on markets for energy and other commodities and that is one of the reasons why we are finding growth so difficult to achieve,” he told a conference organized by the Institute of Economic Affairs, a free-market think tank in London.

“That’s not just a short-term phenomenon. It’s a secular issue that’s going to persist through the middle of this decade,” he said.