Class back on rise in UK _ but elite different

LONDON (AP) — For the past three decades, many Britons had hoped the rigid class system that defined their country from Dickens to Downton Abbey was finally dying. Now they fear that class, their old bugbear, is back on the rise. 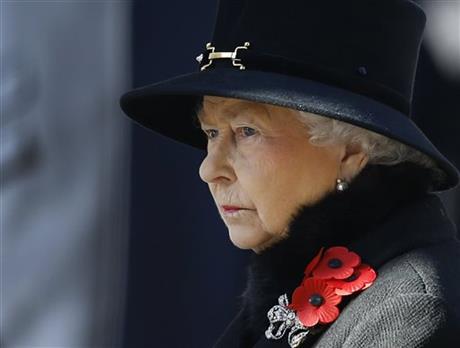 FILE – In this Nov. 10, 2013 file photo, Britain’s Queen Elizabeth II listens during the service of remembrance at the Cenotaph in Whitehall, London. For the past three decades, many Britons had hoped the rigid class system that defined their country from Dickens to “Downton Abbey” was finally dying. Now they fear that class, their old bugbear, is back on the rise. From 1979, Britain was led for more than a decade by Margaret Thatcher, a grocer’s daughter, and then by John Major, the son of a music-hall entertainer. The current leader, David Cameron, is a descendent of King William IV whose Cabinet is stacked with men, like him, from the country’s most prestigious private schools and Oxford and Cambridge universities. (AP Photo/Kirsty Wigglesworth, File)

From 1979, Britain was led for more than a decade by Margaret Thatcher, a grocer’s daughter, and then by John Major, the son of a music-hall entertainer. The current leader, David Cameron, is a descendent of King William IV whose Cabinet is stacked with men, like him, from the country’s toniest private schools and Oxford and Cambridge universities.

Even entertainment has a more upper-crust flavor these days. A recent Sunday Telegraph story with the headline young, gifted and posh said Britain’s oldest private schools, such as all-male Eton and Harrow, had become a production line of young talent, including Homeland star Damian Lewis, Benedict Cumberbatch of Sherlock and Dominic West of The Wire.

Major, alarmed by the apparent reversals, recently sparked a flurry of debate with a speech that made front-page headlines.

In every single sphere of British influence, the upper echelons of power in 2013 are held overwhelmingly by the privately educated or the affluent middle class, Major said. To me, from my background, I find that truly shocking.

So is it true that class divisions are deepening again?

While the ancestral upper caste still retains its mystique in Britain, the numbers reflect a more complicated reality. An elite still dominates, but it is now a club where money — and the education money can buy — counts more than lineage.

This means more women, ethnic minorities and foreigners have made it to the top. But the increase in diversity masks the fact that it’s becoming harder for the poor and unconnected to climb the social ladder, as the government’s social mobility commission concluded in a hefty report published in October.

When the Sunday Times newspaper published its first annual Rich List in 1989, Britain’s wealthiest individual was Queen Elizabeth II. The top 10 was dominated by established British property and business owners, including the Duke of Westminster, who owns vast swaths of central London, supermarket magnate Lord Sainsbury and food mogul Lord Vestey. It was a snapshot of an elite heavy on titled backgrounds, clubby connections and inherited wealth.

The 2013 list is a roll-call of international capitalists who have made London their base, with the Duke of Westminster the only carryover from the original roster. Even the queen has dropped out.

The changes in the super-wealthy class were triggered, in part, by Thatcher, who deregulated business and banking and opened up London’s financial sector to the world.

Philip Beresford, who assembles the list, told the BBC that when I first started 25 years ago about two-thirds of the rich list were people who had inherited their wealth. Today, approaching 80 percent are self-made and that’s really a legacy of the Thatcher years.

The increasing diversity does not extend to gender. There were no female CEOs on the list in 1984 and only three in 2013.

If business has grown more open, many Britons express concern that an old upper class is reasserting itself at the top of politics.

No one would have imagined 20 years ago we’d be going back to Old Etonian prime ministers, said historian David Kynaston, who is chronicling the way British society has changed since World War II in a series of books. It was kind of thought once that class was going away.

But here too the picture is more nuanced. While Britons may focus on the aristocratic lineage of Cameron and his finance minister, George Osborne, they often overlook a new category of career politicians, many of them wealthy individuals with school connections. And while gender and ethnic diversity have grown, the participation of working-class candidates who enter politics after holding real world jobs has withered.

When Thatcher became prime minister in 1979, she was one of only 19 women in the House of Commons, 3 percent of the total. Not one lawmaker out of more than 600 came from an ethnic minority. Almost half had attended private schools, while 36 percent went to Oxbridge, as Oxford and Cambridge are collectively known. The lawmakers included 96 lawyers, 49 teachers and 138 businesspeople — but also 98 manual workers, including 21 former miners.

In the current Parliament, 22 percent of legislators are women and 4.2 percent are from an ethnic minority. Just over a third of lawmakers went to private school and 27 percent to Oxbridge. There are still scores of lawyers and businesspeople, but only 25 former manual workers. And a total of 90 members of Parliament now give their background as politician/political organizer, more than four times as many as did so in 1979.

There are many more call-center workers than ever there were miners, but it’s hard to envisage how a call-center worker would become a member of Parliament in the current system, said Labour Party lawmaker Jon Trickett, a former plumber and builder.

THE SONG AND DANCE

If the bastions of business, politics and the professions were hard for working-class people to storm, there was always entertainment, where a working-class hero, as John Lennon put it, was something to be. You don’t need money or a degree to be a movie star or play rock ‘n’ roll.

Britain’s leading actors appear to be drawn from a smaller pool compared to a generation or two ago.

In a list of actors with the highest cumulative box-office earnings on website Box Office Mojo, there are 10 Britons in the top 50. The older end of the list includes actors from working-class backgrounds such as Michael Caine, son of a fish-market porter, and 55-year-old Gary Oldman, son of a sailor and a London housewife. The 74-year-old Ian McKellen and 61-year-old Liam Neeson both attended state-funded schools.

As the list gets younger, it climbs the social scale: Ralph Fiennes, 51, grandson of a wealthy industrialist; Helena Bonham Carter, 47, whose great-grandfather was a British prime minister; and Orlando Bloom, 37, educated at private school. Of the three young stars of the Harry Potter trio, now in their 20s, Daniel Radcliffe and Emma Watson attended private schools; Rupert Grint went to a state school.

I look at almost all the up-and-coming names and they’re from the posh schools, actress Julie Walters said recently. Don’t get me wrong … they’re wonderful. It’s just a shame those working-class kids aren’t coming through. When I started, 30 years ago, it was the complete opposite.

The best-selling British artists of all time, according to data from the Recording Industry Association of America, are The Beatles, Led Zeppelin, Pink Floyd, Elton John and the Rolling Stones — often self-taught musicians, mostly from lower- or middle-class backgrounds who worked their way up from small, smoky clubs to the big time.

But that was several decades ago.

There’s a growing perception — though hard proof is elusive — that the upper classes are gaining ground in the music business. For every working-class singer made good, such as Adele, there’s a posh, privately educated Coldplay or Mumford & Sons. And there’s also a new kind of class warfare between the authentic bands and manufactured TV talent-show products, such as world-conquering boy band One Direction, molded by pop Svengali Simon Cowell. These days in Britain, with the rise of talent-show acts and performing-arts training academies, the grassroots approach is no longer the main way to fame.

That leaves sports — especially soccer — as the one arena whose stars are overwhelmingly working class. Sport provides a parallel elite, complete with an honorary king, David Beckham, who is handsome, regal and at ease standing alongside Prince William to lobby for British sports.

But in the parallel universe of sport, only a tiny minority of the most talented can even hope to make a living.

In most areas of British life, success comes down to going to the right — usually expensive — school.

A third of Britain’s lawmakers, half its senior doctors and more than two-thirds of its High Court judges went to private schools, which educate just 7 percent of British children, according to statistics compiled by the British Parliament. Well more than a third of Oxbridge undergraduates still come from these private schools, although the figure for non-white students has gone up over two decades from 5 percent to 13 percent at Oxford and 16 percent at Cambridge.

Advocates of greater social mobility point to the education system as the key to loosening the grip of a wealthy elite. Some lament the demise of Britain’s academically rigorous grammar schools, where pupils were selected by exam at age 11.

As engines of upward mobility, grammar schools worked. A list of Britain’s Nobel Prize winners in science over the past 35 years includes the sons — no daughters — of mechanics, gas fitters and stonemasons as well as doctors and academics. Ten out of 18 British laureates since 1979 attended grammar school.

But the grammar schools were largely abolished in the 1970s because the system put most children on a lower-tier track that gave them little chance of attending university. Now middle-class parents with means move to areas with the best state schools, or send their kids to private schools, building what critics say is an educational fortress that starts at kindergarten. In the end, British society faces a fundamental problem: For talented poor people to succeed, some less talented rich people will have to fail.

If you talk about having a more meritocratic society … we would have to have much more downward mobility than we do, said sociologist John Goldthorpe.

And there’s the rub.

Downward mobility: Who’s going to campaign on that?

Jill Lawless can be reached at http://Twitter.com/JillLawless

Singer Robin Thicke and actress wife Paula Patton split
Kim Kardashian Divorce: Reality Star Says She's 'Glad' She And Kris Can Move On
Peter and Charlie Saunders: Bodies of British dad and son killed in French Alps to be flown home
Out Of This World! Lady Gaga Set To Sing In Space In 2015?
How to Select the Most Ideal Beach Shorts for Men
Halle Berry's ex claims he was victim in Thanksgiving brawl
Shakira is pregnant with baby No. 2
Lady Gaga's machine gun bra worn during concert causes outrage

Class back on rise in UK _ but elite different 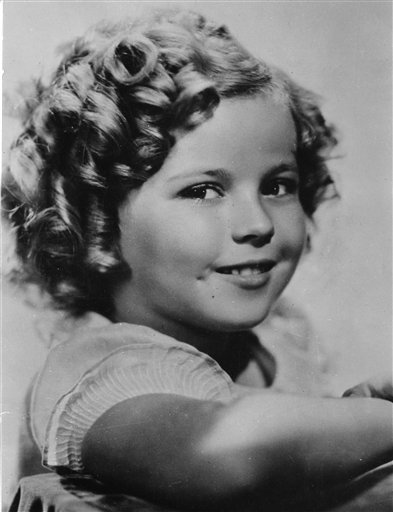 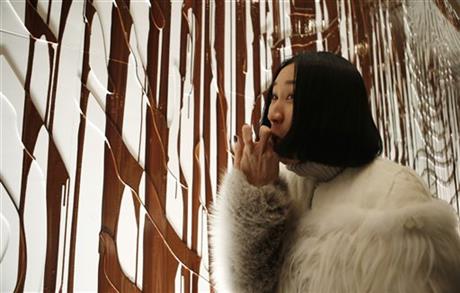