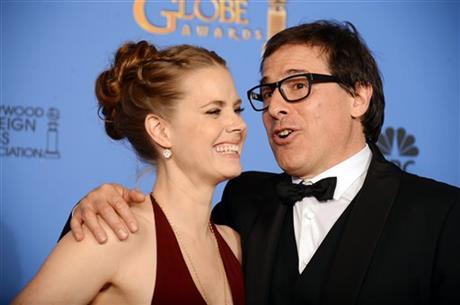 Amy Adams, left, and David O. Russell, winners of the award for best motion picture – comedy or musical for “American Hustle” pose in the press room at the 71st annual Golden Globe Awards at the Beverly Hilton Hotel on Sunday, Jan. 12, 2014, in Beverly Hills, Calif. (Photo by Jordan Strauss/Invision/AP)

But at the end of a madcap Golden Globes (Fey toasted it as “the beautiful mess we hoped it would be”), the major honors soberly ended up with the favorites. David O. Russell’s con-artist caper “American Hustle” led with three awards, including best film comedy. And despite missing out in the other six categories it was nominated in, the unflinching historical drama “12 Years a Slave” concluded the night as best film drama.

“A little bit in shock,” said director Steve McQueen, before shrugging “Roll, Jordan, roll” — the lyrics to the old gospel song sung in the slavery epic.

Russell’s 1970s Abscam fictionalization “American Hustle” had the better night overall, winning acting awards for Amy Adams and Jennifer Lawrence. Best picture was the only award for “12 Years a Slave,” which came in with seven nominations, tied for the most with “American Hustle.”

The awards returned Lawrence, a winner last year for Russell’s “Silver Linings Playbook,” to the stage for an acceptance speech — something she said was no easier a year later.

Matthew McConaughey and Jared Leto both won for their startlingly gaunt performances in the Texas HIV drama “Dallas Buyers Club.” Leonardo DiCaprio, a nine-time Golden Globe nominee, won his second Globe for best actor in a comedy for his uninhibited work in “The Wolf of Wall Street.” He thanked director Martin Scorsese for his mentorship (“Wolf” is their fifth film together) and for “allowing me to stalk you to make this movie.”

Alfonso Cuaron won best director for the space odyssey “Gravity,” a worldwide hit and critical favorite. The film will likely join “American Hustle” and “12 Years a Slave” as an Oscar front-runner on Thursday, when Academy Awards nominations are announced. (The academy honors technical categories that the Globes don’t.)

The night’s biggest winners may have been hosts Fey and Poehler, whose second time hosting the Hollywood Foreign Press Association’s Beverly Hills, Calif., ceremony was just as successful as last year’s show (a six-year ratings high with 19.7 million viewers).

The pair came out with a spree of punch lines, dishing them around the Beverly Hills Hilton, much to the delight of its starry audience. Damon, Meryl Streep and, naturally, George Clooney were among the targets. Fey particularly had the crowd roaring with a description of “Gravity,” which stars Sandra Bullock and Clooney.

“George Clooney would rather float away in space and die than spend one more minute with a woman his own age,” said Fey.

The Globes are unique in celebrating both film and television. Perhaps more than ever before, those lines were blurred Sunday, capping a year in which TV was much celebrated as the more dynamic storytelling medium. The beloved and now concluded “Breaking Bad” earned some of the night’s loudest cheers for its first Globe wins: best drama TV series and best actor in a drama for Bryan Cranston.

Cranston called his honor “a lovely way to say goodbye.” Creator Vince Gilligan said the award gave him “one more chance to thank the fans of the show.”

The big TV film winner, the Liberace melodrama “Behind the Candelabra,” was made for HBO by one of cinema’s most talented directors, Steven Soderbergh, after Hollywood passed. Along with a best movie Globe, Michael Douglas won best actor for his performance as the flamboyant classical pianist. He thanked his co-star Damon.

“The only reason you’re not here is I had more sequins,” Douglas told Damon. (Earlier in the evening, Poehler said among such a famous crowd that Damon was “basically a garbage person.”)

Actors like Chiwetel Ejiofor (“12 Years a Slave,” ”Dancing on the Edge”) and Julia Louis-Dreyfus (“Enough Said,” ”Veep”) were nominated for both film and TV. Louis-Dreyfus parodied the dichotomy by appearing first at the table for “Enough Said” in glamorous sunglasses and smoking an electric cigarette, then sitting (or so the hosts said) in the “TV section” eating a hot dog.

U2 and Danger Mouse won the award for best original song for “Ordinary Love,” recorded for the Nelson Mandela biopic “Mandela: Long Walk to Freedom.” Bono said working on the film completed a decades-long journey with Mandela, having played an anti-apartheid concert some 35 years ago.

“This man turned our life upside down, right-side up,” said Bono of the South African leader who died in December. “A man who refused to hate not because he didn’t have rage or anger or those things, but that he thought love would do a better job.”

Cate Blanchett won best actress in a drama for her Blanche DuBois-like performance in Woody Allen’s “Blue Jasmine.” Allen was honored, too, with the Cecil B. DeMille lifetime achievement award. Always an awards no-show, Allen left Diane Keaton to accept on his behalf.

Many of the night’s surprise winners were literally caught speechless. Andy Samberg (best actor in a comedy TV series, “Brooklyn Nine-Nine”), Elisabeth Moss (winner of best actress, miniseries or movie, for “Top of the Lake”), Robin Wright (best actress in a TV series, drama for “House of Cards”) and even Poehler, herself (best actress in a TV comedy for “Parks and Recreation”), appeared particularly shocked to win and each stumbled through their thank you’s. (Poehler celebrated by enveloping and kissing a surprised Bono.)

Spike Jonze was also blindsided by his best screenplay win for his futuristic romance “Her.”

“I’m a terrible public speaker,” said Jonze. “And I’m bad at English. And it’s the only language I know.”

But the playful interplay of Fey and Poehler again stole the show. The “SNL” duo are signed for next year, too.

“This is Hollywood,” explained Fey. “If something kind of works, they’ll just keep doing it until everyone hates it.”

The Tracy Letts play adaptation “August: Osage County,” starring Meryl Streep, Fey said, proved “that there are great parts in Hollywood for Meryl Streeps over 60.” In one memorable bit that parodied the Hollywood legacies who serve as stage guides, Poehler played Fey’s surly son. They left it open as to whether Harvey Weinstein was the father.

The Hollywood Foreign Press Association, a group of about 85 mostly freelance foreign journalists (Fey and Poehler mocked their publications), make an unlikely body to hold the second-largest awards in Hollywood’s Oscar season. But their boozy, laid-back broadcast, bereft of the academy’s self-regard or tradition of musical dance numbers, has emerged as perhaps the best awards show on television.

It’s at least, as Fey said, “a beautiful mess.” 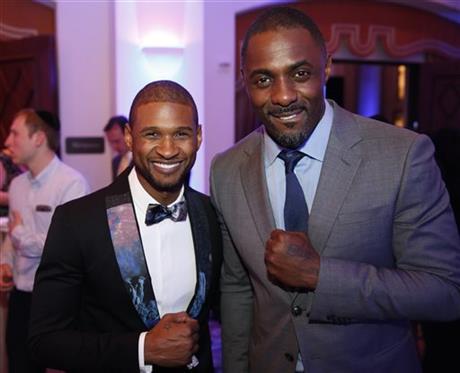 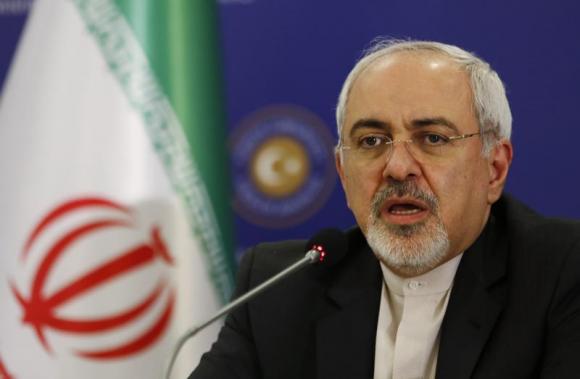