Robert De Niro Slammed for Michelle Obama Joke — Did He Go Too Far? 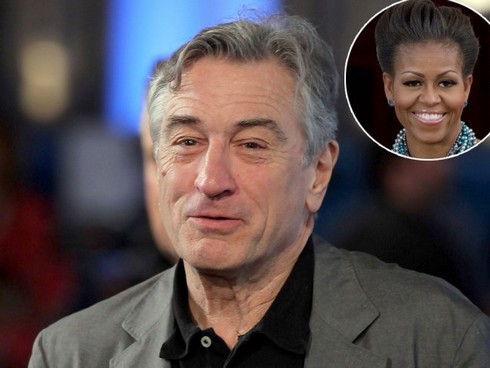 Robert De Niro may be a great actor, but his stand-up routine needs a little work. While hosting a re-election fundraiser for Barack Obama on Monday night, De Niro, 68, made a questionable crack about Michelle Obama — who, by the way, was the guest of honor.

The crowd reportedly cheered at the joke, but the Obama camp was less amused.

“We believe the joke was inappropriate,” said Olivia Alair, press secretary to the first lady, in a statement.

Republican presidential candidate Newt Gingrich also slammed De Niro for what he felt was an affront to his wife.

“I think that Robert De Niro’s wrong,” Gingrich said on Tuesday. “I think the country is ready for a new first lady and he doesn’t have to describe it in racial terms.”

Gingrich is now demanding an apology — not from Robert De Niro, but from Barack Obama. (Huh?)

“What De Niro said last night was inexcusable and the president should apologize for him,” Gingrich declared. “It was at an Obama fundraiser, it is exactly wrong, it divides the country.”

For what it’s worth, De Niro apologized in a statement released Wednesday monring.

“My remarks, although spoken with satirical jest, were not meant to offend or embarrass anyone — especially the first lady,” said the Oscar winner.

We’re sure the Obama campaign is still happy to have De Niro’s support, and hopefully he’s learned a lesson. But for future reference, Michelle Obama: If Robert De Niro ever sasses you again, the correct response is, “You talkin’ to me? You talkin’ to me?”

Robert De Niro Slammed for Michelle Obama Joke — Did He Go Too Far?