Taylor revealed her lowest moment to Savannah Guthrie on “The Today Show” and it was all because of husband Russell’s abuse! Read! 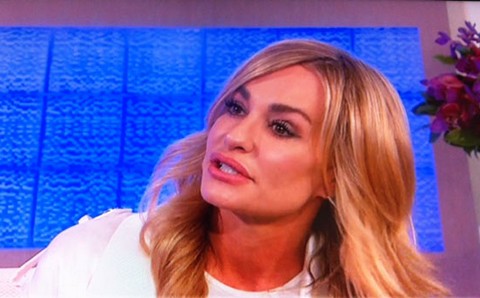 Taylor Armstrong, 38, appeared on The Today Show Monday, Feb. 6, opening up about her difficult marriage to her late husband, Russell Armstrong, while promoting her memoir, Hiding From Reality.

“I was on my knees, hanging over a toilet with my jaw not in the place it was supposed to be, and there was saliva running out of my mouth and I was thinking to myself, ‘How am I not going to call an ambulance? How am I going to protect him? I don’t want him to go to jail. How am I going to get my jaw back into place?’” continued Taylor.

Horrible! As bad as that was for Taylor to endure, that wasn’t the most shocking part of the interview!

Savannah asked Taylor why she would do a reality show in the first place if there was abuse in her relationship.

“Subconsciously, I thought that the cameras would provide some protection. In a restaurant, people don’t act out. They act out at home. And so I thought with millions of people watching, he’s never going to act out. Maybe this is going to provide the protection we need to move forward,” said Taylor.

We feel for you Taylor, but abuse is abuse! Not acceptable. Ever.

What do YOU think, HollywoodLifers? Is Taylor still in denial?