WASHINGTON (AP) — The jet stream, the river of air high above Earth that generally dictates the weather, usually rushes rapidly from west to east in a mostly straight direction. 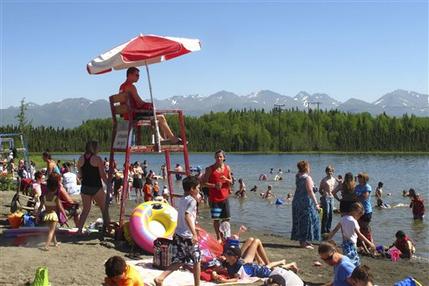 FILE – People swim and sunbathe at Goose Lake in Anchorage, Alaska on Monday, June 17, 2013. Alaska’s largest city and other parts of the state are experiencing a long stretch of higher than normal temperatures. The jet stream, the river of air high above Earth that generally dictates the weather, usually rushes rapidly from west to east in a mostly straight direction. But lately it seems to be wobbling and weaving like a drunk driver, wreaking havoc as it goes. The most recent example is mid-June where some towns in Alaska hit record highs. (AP Photo/Rachel D’Oro)

But lately it seems to be wobbling and weaving like a drunken driver, wreaking havoc as it goes.

The more the jet stream undulates north and south, the more changeable and extreme the weather.

The most recent example occurred in mid-June when some towns in Alaska hit record highs. McGrath, Alaska, recorded an all-time high of 94 degrees on June 17. A few weeks earlier, the same spot was 15 degrees, the coldest recorded for so late in the year.

You can blame the heat wave on a large northward bulge in the jet stream, Rutgers University climate scientist Jennifer Francis said.

Several scientists are blaming weather whiplash – both high and low extremes – on a jet stream that’s not quite playing by its old rules. It’s a relatively new phenomenon that experts are still trying to understand.

Some say it’s related to global warming, but others say it’s not.

Upside-down weather also happened in May: Early California wildfires fueled by heat contrasted with more than a foot of snow in Minnesota. Seattle was the hottest spot in the nation one day, and Maine and Edmonton, Canada, were warmer than Miami and Phoenix.

Consider these unusual occurrences over the past few years:

– The winter of 2011-12 seemed to disappear, with little snow and record warmth in March. That was followed by the winter of 2012-13 when nor’easters seemed to queue up to strike the same coastal areas repeatedly.

– Superstorm Sandy took an odd left turn in October from the Atlantic straight into New Jersey, something that happens once every 700 years or so.

“I’ve been doing meteorology for 30 years and the jet stream the last three years has done stuff I’ve never seen,” said Jeff Masters, meteorology director at the private service Weather Underground. “The fact that the jet stream is unusual could be an indicator of something. I’m not saying we know what it is.”

Rutgers’ Francis is in the camp that thinks climate change is probably playing a role in this.

“It’s been just a crazy fall and winter and spring all along, following a very abnormal sea ice condition in the Arctic,” Francis said, noting that last year set a record low for summer sea ice in the Arctic. “It’s possible what we’re seeing in this unusual weather is all connected.”

Other scientists don’t make the sea ice and global warming connections that Francis does. They see random weather or long-term cycles at work. And even more scientists are taking a wait-and-see approach about this latest theory. It’s far from a scientific consensus, but it is something that is being studied more often and getting a lot of scientific buzz.

The jet stream, or more precisely the polar jet stream, is the one that affects the Northern Hemisphere. It dips down from Alaska, across the United States or Canada, then across the Atlantic and over Europe and “has everything to do with the weather we experience,” Francis said.

The jet stream is about 14 percent slower in the fall now than in the 1990s, according to a recent study by Francis. And when it slows, it moves north-south instead of east-west, bringing more unusual weather, creating blocking patterns and cutoff lows that are associated with weird weather, the Rutgers scientist said.

Take the past two winters. They were as different as can be, but both had unusual jet stream activity. Normally, the jet stream plunges southwest from western Washington state, sloping across to Alabama. Then it curves slightly out to sea around the Outer Banks, a swoop that’s generally straight without dramatic bends.

During the mostly snowless winter of 2011-12 and the record warm March 2012, the jet stream instead formed a giant upside-down U, curving dramatically in the opposite direction. That trapped warm air over much of the Eastern U.S. A year later the jet stream was again unusual, this time with a sharp U-turn north. This trapped colder and snowier weather in places like Chicago and caused nor’easters in New England, Francis said.

But for true extremes, nothing beats tornadoes.

In 2011, the United States was hit over and over by killer twisters. From June 2010 to May 2011 the U.S. had a record number of substantial tornadoes, totaling 1,050. Then just a year later came a record tornado drought. From May 2012 to April 2013 there were only 217 tornadoes – 30 fewer than the old record, said Harold Brooks, a meteorologist at the National Severe Storms Laboratory. Brooks said both examples were related to unusual jet stream patterns.

Last fall, a dip in the jet stream over the United States and northward bulge of high pressure combined to pull Superstorm Sandy almost due west into New Jersey, Francis said. That track is so rare and nearly unprecedented that computer models indicate it would happen only once every 714 years, according to a new study by NASA and Columbia University scientists.

“Everyone would agree that we are in a pattern” of extremes, NOAA research meteorologist Martin Hoerling said. “We don’t know how long it will stay in this pattern.” 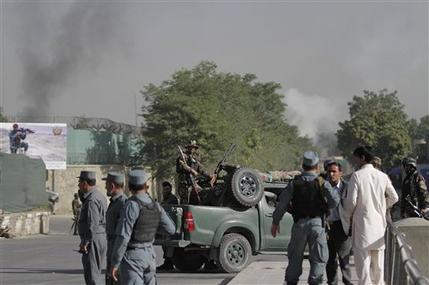 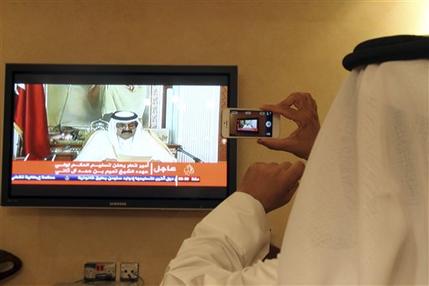