WARRI, Nigeria (AP) — He survived three days in a sunken tugboat at the bottom of the Atlantic Ocean and was hailed as a miracle survivor, but now the Nigerian faces nightmares and questions on whether he used black magic. 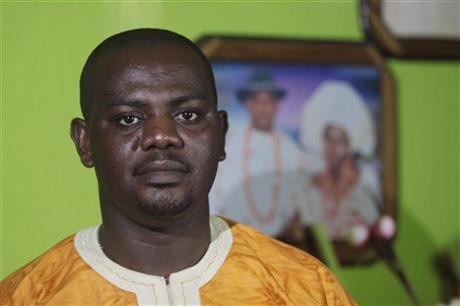 In this photo taken Thursday, Dec. 5, 2013. Harrison Odjegba Okene, during an interview with Associated Press, in Warri, Nigeria. The man who survived for three days in an upended tugboat at the bottom of the Atlantic Ocean says he will never, ever, go to sea again. Harrison Odjegba Okene, 29, has transformed his life since a diver rescued him in May: he cooks in an ordinary kitchen on land, no more boat galleys for him, spends more time at home with his wife and prays more than ever before to the God he says saved him from almost certain death. Okene was the only survivor in a crew of 12 on the Jascon 4, and that still haunts him. (AP Photo/Lekan Oyekanmi)

Harrison Odjegba Okene, 29, has transformed his life since a diver fished him out of the sea: He never again wants to find himself in a boat galley, and has since started working as a cook on firm ground.

Okene was the only survivor in a crew of 12 when the Jascon 4 capsized in May, and that still haunts him.

He stayed alive by breathing from an ever-dwindling supply of oxygen in an air pocket of the tugboat. A video of Okene’s rescue in May was posted on the Internet more than six months later and has since gone viral.

When recounting the rescue at his local parish, even the priest asked him if he had used black magic to survive.

“I was so surprised! How could a man of God be saying this?” Okene said, his voice rising in disbelief.

Okene spoke to The Associated Press at his modest two-bedroom apartment in the southern oil industry center of Warri, in his first interview with the international media since his ordeal.

He didn’t go to the funerals of his colleagues because he feared their families’ reactions — Nigerians being generally very religious but also superstitious.

“I couldn’t go because I didn’t know what the family will say, thinking ‘Why is he the only one to survive,'” said Okene.

It’s a question that has shaken his steadfast faith. “Every week I ask (God) ‘Why only me? Why did my colleagues have to die?'”

His rescuers from the Dutch company DCN Diving, were looking only for bodies and already had recovered four corpses when they came upon Okene.

The chubby-faced cook by that time had almost given up hope, but then he heard the sound of a boat, a hammering on the side of the vessel and then, after a while, saw lights and the rising waters around him bubbling.

He said he knew it had to be a diver, but he was on the wrong end of the cabin.

“He came in but he was too fast, so I saw the light but before I could get to him, he was already out. I tried to follow him in the pitch darkness but I couldn’t trace him, so I went back.”

When the diver returned, Okene had to swim through the dark waters to reach him and still he did not see him. “So I tapped him at the back of his neck, so he was afraid.” When the diver saw his hand he said “corpse, corpse, a corpse,” into his microphone, reporting up to the rescue vessel.

Still, the diver appeared to have a hard time believing he had survived, Okene said.

“I knew when he gave me water he was observing me (to see) if I’m really human, because he was afraid.”

On the video, there are expletives and exclamations of fear and shock from Okene’s rescuer, and then joy as the realization set in: There was a survivor.

Until that moment, Okene believed his colleagues must have escaped. The tug was one of three towing a Chevron oil tanker in Nigeria’s oil-rich Delta waters, but on May 26 there was a sudden lurch and it keeled over.

His wife Akpovona Okene, 27, said he still suffers nightmares. “When he is sleeping, he has that shock, he will just wake up in the night saying ‘Honey see, the bed is sinking, we are in the sea.”

Okene said he made a pact with God when he was at the bottom of the ocean: “When I was under the water I told God: If you rescue me, I will never go back to the sea again, never.” 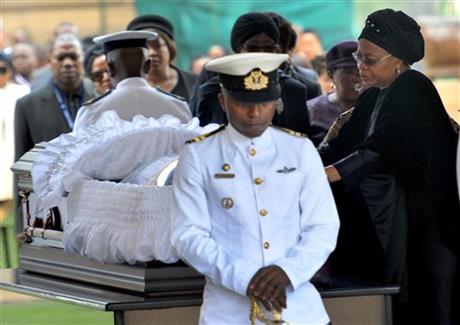 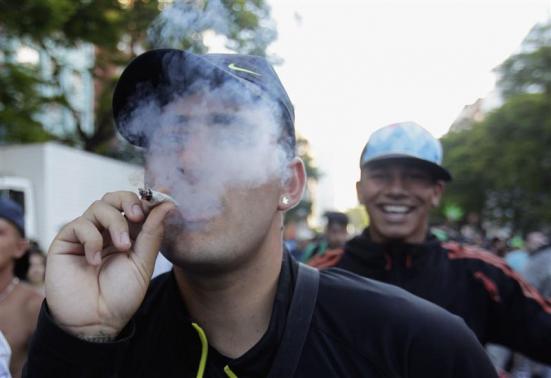