(Reuters) – Islamic State fighters advanced into the south west of the Syrian Kurdish town of Kobani overnight, a monitoring group said on Tuesday, taking several buildings to gain attacking positions from two sides of the city.

The prospect that the town on the Turkish border could fall to militants who have besieged it for three weeks has increased pressure on Turkey, with the strongest army in the region, to join an international coalition to fight against Islamic State.

From across the nearby Turkish border two Islamic State flags could be seen flying over the eastern side of Kobani. Two air strikes hit the area and sporadic gunfire could be heard.

“Yesterday there was a violent clash. We have fought hard to keep them out of the town,” she said by telephone. “The clashes are not in the whole of Kobani, but in specific areas, on the outskirts and towards the center.”

Islamic State, an al Qaeda offshoot, has ramped up its offensive in recent days against the mainly Kurdish border town, despite being targeted by U.S.-led coalition led air strikes aimed at halting its progress.

The group wants to take Kobani to consolidate a dramatic sweep across northern Iraq and Syria, in the name of an absolutist version of Sunni Islam, that has sent shockwaves through the Middle East.

There were clashes overnight. Not heavy but ISIS is going forward from the southwest. They have crossed into Kobani and control some buildings in the city there, said Rami Abdulrahman, head of the Syrian Observatory for Human Rights, a group that monitors the conflict with a network on the ground. ISIS is a former name for Islamic State.

They are about 50 meters inside the southwest of the city, Abdulrahman said.

An estimated 180,000 people have fled into Turkey from the Kobani region following the Islamic State advance. More than 2,000 Syrian Kurds including women and children were evacuated from the town after the latest fighting, a member of the Kurdish Democratic Union Party (PYD) said on Monday.

Before the offensive, Kobani, known as Ayn al-Arab in Arabic, was home to refugees from the civil war which pits rebels against President Bashar al-Assad and has deteriorated into hundreds of localized battles between different factions.

The most powerful of the myriad militias fighting against Assad, Islamic State has boosted its forces with foreign fighters and defectors from other rebel groups. It gained additional heavy weaponry after its fighters swept through northern Iraq in June, seizing arms from the fleeing Iraqi army.

The group released a video showing dozens of men said to be from Ahrar al-Sham, a rival Islamist group which has clashed with it in the past, pledging allegiance to its leader Abu Bakr al-Baghdadi, SITE monitoring service said on Monday.

The United States has been bombing Islamic State positions in Iraq since August and extended the campaign to Syria in September. Arab states have joined both campaigns, while other Western countries are participating in Iraq but not Syria.

Two months in to the U.S. campaign, the U.S. military has added a new weapon to its arsenal in Iraq, using Apache helicopters for the first time, U.S. officials said on Monday.

Army Major Curtis Kellogg said Baghdad had asked for helicopter support near Fallujah to push back militants west of the capital Baghdad.

The low-flying helicopters give the U.S. military greater capacity to identify individual targets and provide close air support to Iraqi troops in combat, suggesting close cooperation with forces on the ground. But they also expose U.S. troops to far greater risk from ground fire.

Turkey, a NATO member which shares a 900 kilometer (500 mile) border with Syria and has the most powerful military in the area, has so far refrained from joining the campaign, but the plight of Kobani has increased pressure to act.

Turkey says the scope of the campaign in Syria should be broadened to seek to remove Assad from power. It has sought a no-fly zone in northern Syria, which would require the coalition to take on Assad’s air force as well as Islamic State, a move Washington has not agreed to.

“We are ready to do everything if there is a clear strategy and if we can be sure that our border can be protected after (Islamic State is gone), Prime Minister Ahmet Davutoglu said in an interview with CNN International.

We don’t want the regime anymore on our border pushing people towards Turkey. We don’t want other terrorist organizations … If Assad stays in Damascus with this brutal policy, if (Islamic State) goes another radical organization may come.

The brother of a British aid worker who was beheaded by Islamic State said Britain should put troops on the ground in the Middle East to fight against the militants.

Alan Henning’s killing has been condemned by Western leaders and British Muslim groups alike. He was the fourth Western hostage executed by Islamic State fighters since the United States launched strikes on the group in Iraq in August. 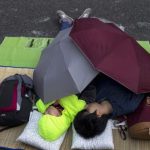 Hong Kong protests at crossroads as traffic, frustration pile up 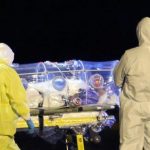 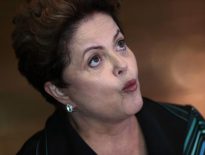 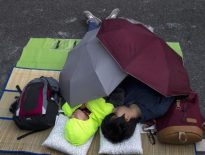