(Reuters) – Last October, President Barack Obama mounted a makeshift podium on La Placita Avenue, in a Las Vegas subdivision hard hit by foreclosures. As TV cameras whirred, he pledged to do “everything in my power to help stabilize the housing market, grow the economy, accelerate job growth.” 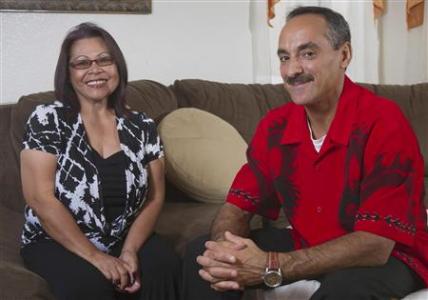 Hubert Pereira, a cook, was in the front row that day. “It was great,” he said, beaming as he recalled that the president had shaken his hand and hugged his companion, Felisa Medalla.

But a year after the speech, the handshake and the hug, Pereira and Medalla are far from convinced that happy times are here again.

Pereira, 50, recently switched his registration from Democrat to “nonpartisan” after suffering a yearlong bout of unemployment. Medalla, a waitress who was laid off seven months ago, complained: “People say Obama is doing good. But how can he be doing good when I don’t have a job?”

Her question goes to the heart of why, despite Obama’s recent uptick in the polls, his battle for reelection against Republican nominee Mitt Romney remains too close to call.

In nationwide Reuters/Ipsos surveys, conducted over nine months, a startling 35 percent of households have suffered a major economic setback in the past four years. They have either lost a house to foreclosure or are in the middle of losing one. Or they have lost a job or taken a pay cut. Almost 96,000 adults were polled.

The disillusion among voters in this group is extreme: Only 21 percent think the national economy is going in the right direction, while 73 percent say it is on the wrong track (click here for the poll data: tinyurl.com/economytrack).

Strikingly, many don’t seem to blame the president. They divide about evenly on which candidate has the better plan for the economy: Forty percent pick Obama and 42 percent choose Romney (click here for the poll data: tinyurl.com/economyplan).

OUT OF WORK AND UNDERWATER

At the edge of Las Vegas, miles from its garish casinos and peep shows, acres of dun-colored stucco homes, once mostly owner-occupied, are pimpled with “For Rent” signs. U-Haul vans wind in and out of dusty lanes with jaunty names: Rosy Sunrise Street, American Beauty Avenue, Glory Rise Court.

In Nevada, one of a handful of swing states that could affect the election’s outcome, the recession has hardly receded. The state’s 12.1 percent unemployment is the nation’s highest. Experts say another foreclosure wave is in the offing, as 59 percent of Nevada homeowners still owe more on their houses than the value of their property – as compared to 22 percent nationwide.

La Placita, a one-block street with Hispanic, Caucasian and African-American residents, has seen its share of suffering, before and since Obama’s visit. Tinfoil covers the windows of several homes, an effort to cut the cost of air-conditioning. A red, white and blue flier tucked in a door jamb reads “Obama fights for our American Dream,” but the house is empty due to a recent foreclosure.

Pereira and Medalla, who lost a home before moving to a rental at the foot of La Placita, are undecided about how they will vote on November 6. But many of the street’s residents who have lost jobs and homes since Obama was elected nonetheless plan to cast ballots for him.

“Everything is slowly getting better,” said Joseph Wozniak, 29, who shares a La Placita rental with two housemates. “I didn’t expect miracles.”

Wozniak lost a job installing electronics in spec homes when the housing market imploded. He survived on food stamps and unemployment benefits for a year until he found work at a music store. A few months later the store went under.

But Wozniak, who plays in two bands, used the months of unemployment to hone his skills repairing electric guitars and programming lights for art shows. He now makes about $25,000 a year as an independent contractor. “Obama is responsible for extending unemployment benefits,” he said. “I used that time to build a network.”

The main reason he plans to vote for the president is healthcare, he added. Wozniak has no insurance and is hoping that under the Affordable Health Care Act, informally known as Obamacare, he can afford the asthma medicine he needs.

A more robust safety net is one reason many voters give for supporting Obama. In Reuters/Ipsos surveys of those whose families have suffered from the recession, the president outpolls Romney, 47 percent to 43 percent.

“I DON’T KNOW WHO TO BLAME”

Romney supporters say continuing job losses and foreclosures are reasons to vote for the GOP nominee.

At a recent rally in the University of Nevada’s Cox Pavilion, Romney told 3,000 cheering Las Vegans that he would ease regulations on banks “to reignite the housing economy” and would get the federal government to sell more than 200,000 vacant, foreclosed homes it owns.

He reiterated his pledge to create 12 million jobs over four years, as supporters, many of them wearing “Nobama” buttons, shouted “USA! USA!”

With both presidential candidates touting plans to boost employment, voters whose families have been most affected by the recession remain sharply divided over who would best protect American jobs. In Reuters/Ipsos surveys, 42 percent pick Obama and 41 percent choose Romney.

In the top row of the pavilion, Andrew Bateman, 35, with his 8-year-old son in tow, was vigorously applauding the GOP nominee. Romney, a former private equity executive, “has a good track record in turning businesses around,” he said. “Obama could have done a lot more on the economy.”

In an interview after the rally, Bateman, a single father, said his business selling life insurance to teachers had dried up in 2010 after budget cuts to local schools. He and his son moved in with his parents and went on food stamps. In February his father lost his job as a piano salesman. Bank of America foreclosed on their home, and his father moved to Spokane, Washington, for another job.

Bateman went back to college to get an accounting degree and now survives on college loans, splitting the rent on a condo with his girlfriend. But he expects to drop out by the end of the year because, he said, he has hit the ceiling for Pell grants and colleges are making it harder to borrow money.

“I don’t know who to blame,” he said, “but Obama was supposed to be the education president.”

Nevada, where the most recent polls show Obama leading by several points, is awash with campaign advertising. In one TV spot, the Obama campaign overlays photos of veterans, senior citizens, factory workers and families with Romney’s recorded comments at a fundraiser that 47 percent of Americans “who believe they are entitled to healthcare, to food, to housing” will vote for Obama. “My job is not to worry about those people,” Romney said.

Obama also seeks to contrast Romney’s more laissez-faire approach to housing with his own efforts to push banks to modify mortgages. A union-funded TV spot features Romney’s comments to a Las Vegas newspaper: “Don’t try and stop the foreclosure process. Let it run its course and hit the bottom.”

Meanwhile, Romney is taking aim at the president’s healthcare reform. “Some think Obamacare is the same as free healthcare,” the 30-second ad says. “But nothing is free. Obama is raiding $716 billion from Medicare, changing the program forever.”

The spot taps into deep divisions over the 2010 Affordable Care Act. Even among those whose families have lost jobs, lost income or suffered foreclosures, only 48 percent support the law, and 52 percent oppose it in Reuters/Ipsos’ surveys.

Paradoxically, when asked which candidate has the better approach to healthcare, they prefer Obama to Romney 44 percent to 38 percent.

Romney backers are also running spots capitalizing on an Obama remark that infuriated many Nevadans. It features a sentence plucked out of context from a 2010 speech to a New Hampshire crowd: “You don’t blow a bunch of cash in Vegas when you’re trying to save for college.”

That ad, which ran on Spanish-language TV, nevertheless made an impression on Uziel DeLeon, a laid-off housekeeper who was checking out a rental near La Placita on a recent morning. “Obama told people not to waste their money coming to Vegas,” he said incredulously. “But without tourists, there’s no work here.”

So would he vote for Romney? DeLeon, a Guatemalan immigrant who became a U.S. citizen three months ago, shook his head dismissively. “Romney wants to kick out people who are not from here,” he said. “Obama would do more for Latinos.”

Hispanics, who accounted for 16 percent of the Nevada electorate in 2008 and 2010, haven’t forgotten Romney’s support for Arizona’s restrictive immigration law and his suggestion during the GOP primaries that some 12 million undocumented workers should “self-deport.”

Among Reuters/Ipsos’ surveys of voters whose families have lost jobs, income or suffered foreclosures, Obama beats Romney among Hispanics by 78 percent to 19 percent and among African-Americans by 89 percent to 1 percent. Among whites, Romney retains a clear advantage of 52 percent to 36 percent.

FAITH IN THE AMERICAN DREAM

In swing states such as Nevada, Florida and Colorado, the Latino vote could prove decisive.

A few blocks from La Placita on a recent afternoon, Luisa Garay, 26, unpacked groceries in the kitchen as her mother cooked chicken tacos. A sister was ironing in the living room, a brother was watching TV. Small children darted about.

Garay’s father immigrated legally from Honduras and worked his way up from busboy to civil engineer with the Nevada Department of Transportation. He bought a home and, during the housing bubble, refinanced it to buy another, which he rented to Garay and several roommates.

When the recession hit, Garay, the single mother of an 8-year-old, lost her job as a college counselor. She and her roommates couldn’t afford to cover the mortgage. What with other job losses and some illness in the family, “Everything fell apart,” Garay said. “We hired a lawyer, but the bank foreclosed on both homes. I’ve never seen my dad so sad. We all fell into depression.”

Like Romney, the Garays are Mormons, as is about 7 percent of the Nevada electorate. And while most Mormons vote Republican, the Garays support Obama. “Romney seems to think we are lazy,” Garay said. “But when I lost my job, I worked seven days a week to make ends meet – cleaning offices, tutoring, caring for disabled kids.”

She sees Obama as supportive on healthcare (she has no insurance), food stamps (she got them after losing her job) and student loans (she owes $15,000). “Obama is for the working class,” she said.

Despite the family’s troubles, Garay’s lot is improving. She found another full-time job, leading college workshops for high school students, and qualified for an FHA loan to buy an $80,000 home. Her parents have moved in with her.

“We’re all struggling to make it to the American Dream,” she said.

Whether Americans see themselves as achieving that dream – and whether they think Obama or Romney might make it easier to get there – is fundamental to the election.

In Reuters/Ipsos surveys, when those whose families have suffered job losses, income cuts or foreclosures were asked if “people in this country can still live the American Dream,” 53 percent agreed they can.

It is a slim majority, but it suggests that on La Placita Avenue, in the surrounding streets and across the United States, the strivers outnumber the skeptics.

The Reuters/Ispsos database is now public and searchable here: tinyurl.com/reuterspoll 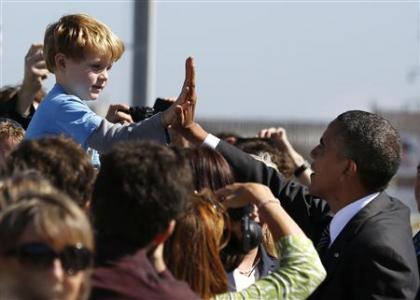 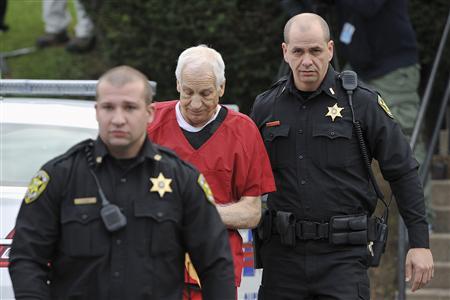