The number of coronavirus deaths in New York state more than doubled in 72 hours to 1,941, and Gov. Andrew Cuomo said Tuesday that projections show the outbreak worsening through the month.

The sobering news from the governor came as he pledged to close New York City playgrounds to slow the spread of the virus, leaving green spaces open. He said overburdened hospitals in hard-hit downstate areas have begun transferring patients north to the Albany area.

A month after New York discovered its first infection, the state tallied more than 83,000 positive cases. The 1,941 deaths were up from 965 Sunday morning.

The governor cited projections showing the outbreak reaching its apex roughly by the end of April, which means another month of this.

There are more than 12,000 people hospitalized currently. The number is expected to grow dramatically.

New York City’s Health Department reported late Tuesday that nearly 1,100 people have died of the virus in the city.

Data released by the city shows that the disease is having a disproportionate effect in certain neighborhoods, mainly in Brooklyn and Queens.

An emergency field hospital opened Wednesday in Central Park near The Mount Sinai Hospital, days after a temporary hospital in the Jacob K. Javits Convention Center began taking patients and a Navy hospital ship docked off Manhattan. Officials are scrambling to add more beds around the city as hospitals become overrun.

Nearly 16% of the New York Police Department’s uniformed force is now out sick. More than 1,000 officers have tested positive for the virus.

The virus, which causes the disease COVID-19, has spread rapidly across the globe. It causes mild symptoms in many of those infected, but it can cause severe symptoms or death for some, including older adults and those with underlying medical conditions such as respiratory ailments. 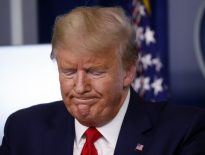 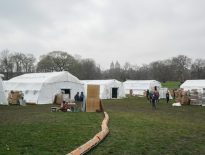