An official source said the president, who has made no statement or public appearance since Wednesday’s stunning bomb attack on a crisis meeting of defense and security chiefs, was still commanding operations from his Damascus office.

But opposition sources and a Western diplomat said the embattled leader was now in the coastal city of Latakia.

“Our information is that (Assad) is at his palace in Latakia and that he may have been there for days,” said a senior opposition figure, who declined to be named. The palace, which Assad has used before to conduct official business, is located in hills near the city, Syria’s main Mediterranean port.

The diplomat, who is following events in Syria, told Reuters: “Everyone is looking now at how well Assad can maintain the command structure. The killings yesterday were a huge blow, but not fatal.”

Residents said there was no let-up in the heaviest fighting – now in its fifth day – to hit the Syrian capital in a 16-month revolt against Assad, whose family has dominated the pivotal Arab country for 42 years.

The battles encroached within sight of the presidential palace, near the security headquarters where Wednesday’s emergency meeting was held, with videos showing clouds of smoke rising over the skyline.

The U.N. Security Council put off a scheduled vote on a Syria resolution until Thursday and U.S. President Barack Obama telephoned President Vladimir Putin of Russia, Assad’s main ally, to try to persuade Moscow to drop support for him.

A video from overnight in the neighborhood of Sayed Zainab shows a makeshift clinic in a house, with blankets and medical supplies strewn all over the floor and a man shouting directions on a megaphone as men carry in mutilated bodies on sheets.

Some of the bodies were blackened, perhaps from a blast or a fire. Others were blown apart apparently by high explosive.

“The shelling did not stop all night. Shelling could be heard in all the city. It was loud. There were also sounds of clashes. Not many people are venturing out. I can’t even find a taxi, so I’m waiting for somebody to pick us up,” a resident in Damascus said, speaking by telephone.

“Everyone in the neighborhood is arming themselves. Some with machineguns, some with shotguns. Some even just with knives. And whoever doesn’t have anything just tries to stay awake and stay alert as much as they can,” said another resident, speaking by phone from the Midan area.

“I can’t even tell you what is going on outside because I’ve shuttered the windows and locked the doors. I just hear every now and then the gunfire, it’s like it’s in the room.”

Many Damascenes were reported fleeing pockets of fighting.

“We’ve had a lot of people come in from last evening, from other neighborhoods like refugees, and people gather around them to hear what they’ve seen. My neighbor tries to see if they have relatives here or see if there is someone that can host them for a while,” said a woman contacted by telephone.

Checkpoints around Midan and the ancient walled Old City of Damascus had been removed, residents said. It was unclear if security forces had changed tactics to stop rebels targeting soldiers, or if it was a temporary move in the heat of battle.

The bombing seemed part of a coordinated assault on the capital that has escalated since the start of the week. Rebel fighters call it the “liberation of Damascus” after months of fierce clashes which activists say have killed 17,000 people.

Assad’s brother-in-law Assef Shawkat, a top commander and one of the pillars of the Assad clan’s rule, was killed in the Wednesday blast along with Defense Minister Daoud Rajha.

Another senior general was also killed and the heads of intelligence and the Interior Ministry were wounded, seriously wounding the security apparatus of the Assad family.

The army shelled its own capital from the surrounding mountains as night fell on Wednesday. Government troops, having vowed retaliation for the assassination, fired machineguns into the city from helicopters.

Activist videos posted on the Internet showed bloodied bodies lying in the street.

A security source said the bomber who struck inside the security headquarters was a bodyguard for Assad’s inner circle. Anti-Assad groups claimed responsibility.

U.N. Secretary-General Ban Ki-moon condemned the Damascus blast and expressed grave concern over the use of heavy weapons.

“Time is of the essence,” he said. “The Syrian people have suffered for too long. The bloodshed must end now.”

Western leaders fear the conflict, which has been joined by al Qaeda-style jihadists, could destabilize Syria’s neighbors – Israel, Lebanon, Turkey, Iraq and Jordan.

U.S. Defense Secretary Leon Panetta said: “This is a situation that is rapidly spinning out of control.” He called for maximum global pressure on Assad to step down.

British Prime Minister David Cameron, whose government has sponsored the sanctions resolution, said on Thursday it was time for Assad to go to avoid an all-out civil war.

The generals killed and wounded in the bombing form the core of Assad’s crisis unit in charge of operations to crush the revolt, which grew out of protests inspired by Arab Spring uprisings that unseated dictators in Tunisia, Egypt and Libya.

An aide to Russian President Vladimir Putin, who has resisted Western efforts to impose international sanctions on Assad, said Russia had not been discussing the possibility of taking in Assad if he chose to leave Syria.

“This cowardly terrorist act will not deter our men in the armed forces from continuing their sacred mission of pursuing the remnants of these armed terrorist criminal gangs,” Freij said on state television. “They will cut off every hand that tries to hurt the security of the nation or its citizens.”

Neighboring Jordan’s King Abdullah said violence may have ruled out the possibility of a negotiated power transition.

“The realities on the ground may have overtaken us, therefore I think the clock is ticking and we have… reached the point where the political option is too late,” he told CNN in an interview.

Rebels were jubilant at their success in penetrating into the capital. Abdullah al-Shami, a rebel commander based in Turkey, said: “I expect a speedy collapse of the regime … and it means we will not be in need of outside intervention, with the regime beginning to crumble much faster than we envisaged.”

Yet some opposition figures said victory would still not be easy. “It is going to be difficult to sustain supply lines and the rebels may have to make a tactical withdrawal at one point, like they did in other cities,” veteran opposition activist Fawaz Tello said from Istanbul.

“But what is clear is that Damascus has joined the revolt.” 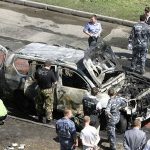 Words and Deeds Show Focus of the American Military on Asia 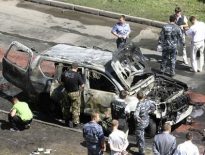