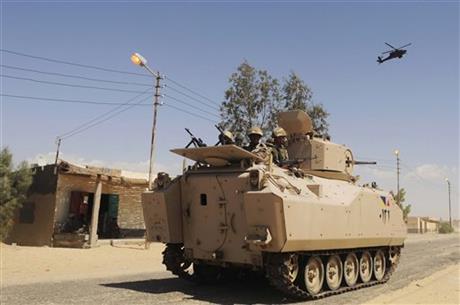 FILE – In this Tuesday, May 21, 2013, file photo, Egyptian Army soldiers patrol in an armored vehicle backed by a helicopter gunship during a sweep through villages in Sheikh Zuweyid, northern Sinai, Egypt. A military official said Saturday, Sept. 7, 2013, Egyptian helicopters and tanks are attacking Islamic militants in villages in the northern Sinai Peninsula. The Saturday assault came after Egypt deployed a column of armored vehicles and trucks carrying infantry into the region, a militant stronghold, in a major new counterinsurgency offensive, the official said. (AP Photo, File)

The bombings in the town of Rafah on the border with the Gaza Strip appear to be a deadly response by insurgents to a military crackdown on their north Sinai hideouts that has reportedly left over three dozen dead.

Suicide attacks are a new element in the wave of political violence triggered initially by the ouster of Egypt’s Islamist president Mohammed Morsi on July 3, and intensified by a violent crackdown on his supporters’ protest camps. They suggest that al-Qaida-inspired groups may be developing a new capability to strike at security and other targets, both in Sinai and elsewhere in Egypt.

One of the two bombings in the town of Rafah brought down a two-story building housing the local branch of military intelligence. It collapsed the entire structure and buried an unspecified number of troops under the rubble, two security officials said, speaking on condition of anonymity because they were not authorized to talk to the media. They said the wounded included 10 soldiers and seven civilians, three of them women.

The second attack targeted an armored personnel carrier deployed as part of an army checkpoint not far from the intelligence headquarters, the officials added. The officials said the remains of the two suicide bombers have been recovered.

The officials gave a death toll of nine for both attacks but did not provide a breakdown of how many were killed in each.

The attacks come less than a week after a suicide car bombing targeted the convoy of Egypt’s interior minister, who is in charge of the police, shortly after he left his home in an eastern Cairo district. The minister Mohammed Ibrahim escaped unharmed, but the blast caused extensive damage in the area.

One of the al-Qaida-inspired groups based in Sinai, Ansar Jerusalem, later claimed responsibility for that bombing. The claim was never verified. If true, it would be the first time a Sinai-based group carried a suicide attack in the heart of Cairo.

These three bombings, plus another one in Sinai last month, are the first in Egypt since the 2011 uprising that overthrew longtime autocrat Hosni Mubarak.

There was no immediate claim of responsibility for Wednesday’s attack.

The group described in its two-page statement the Egyptian military of conducting “a dirty war, deputizing all anti-Islam forces in and outside Egypt, especially the Jews.” The group has ties to militants in the Gaza Strip, and has claimed in the past attacks on Israel.

The military offensive in the Sinai and the militant response has nudged the conflict in the lawless desert region closer to a full-blown insurgency, compounding Egypt’s woes at a time when the country is struggling to regain political stability and economic viability more than two years since Mubarak’s overthrow.

The military offensive, kicked off on Saturday, was the biggest sweep of the area in recent years. Helicopter gunships and tanks pounded suspected hideouts and weapon caches of Islamic militants in tiny villages south of Rafah and the nearby town of Sheikh Zuweyid.

One officer and two soldiers have also been killed in the operation.

The military assault increased tension with local residents, who accuse authorities of randomly targeting homes and arresting innocent people. Some are concerned that it may lead to an open war with Bedouin tribes, whose members are divided between those who back the government and others support or belong to insurgent groups.

Ansar Jerusalem is apparently trying to exploit such anger, claiming in its statement that the military has killed civilians, set fire to homes, torched their private cars, bombed mosques and stolen possessions. It also claimed that Israeli drones backed military in its offensive.

Access to the area is limited and neither side’s claims could be verified.

Officials say the militants belong to a number of extremist groups that seek the establishment of an Islamic caliphate in the northern Sinai based on a narrow and hard-line interpretation of the religion.

On Monday, MENA cited unnamed senior security officials as saying at least six militant groups with an estimated 5,000 members operate in Sinai. The militants use mountains in north and central Sinai as hideouts, where the rugged terrain is difficult to search.

In previous years, some groups have focused on Israel, targeting the Jewish state with rockets, while others fought the security forces.

Now, officials say, the groups are coordinating more closely to focus on the “treasonous” military that overthrew the Islamist leader Morsi and then launched an offensive into their territory.

“The criminal army is waging a war on Islam because it is an army that is loyal to the enemies of God and is battling the religion of God,” the group said in the statement. “Fighting them and deterring them is obligatory.” 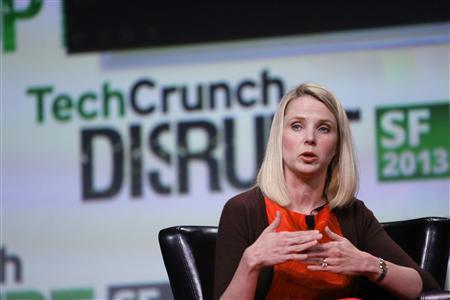 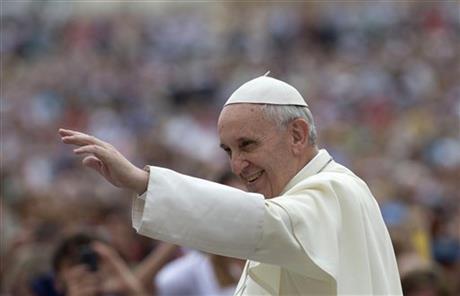