(Reuters) – The Supreme Court upheld President Barack Obama’s healthcare law on Thursday in an election-year triumph for him and fellow Democrats who championed the most sweeping overhaul since the 1960s of the unwieldy U.S. healthcare system. 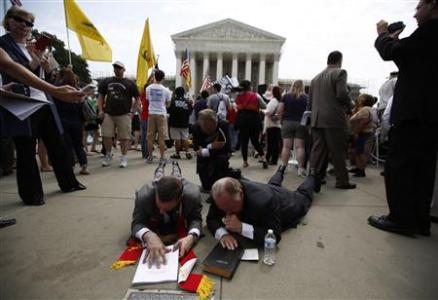 Religious leaders lay on the ground and pray over a bible and a copy of the verdict on President Barack Obama’s signature healthcare overhaul law outside the Supreme Court in Washington June 28, 2012. REUTERS/Jason Reed

In a 5-4 ruling based on the power of Congress to impose taxes, the nation’s highest court preserved the law’s “individual mandate” requiring that most Americans obtain health insurance by 2014 or pay a tax. The justices also preserved, with some changes, a provision of the law expanding the Medicaid health insurance program for the poor.

The decision – written by conservative Chief Justice John Roberts and joined by the court’s four liberals – was a setback for Republicans who mounted unified opposition in Congress to the law before its 2010 passage and who deride it as meddling in the lives of individuals and in the business of the states.

Obama and Mitt Romney, the Republican challenger in the November 6 presidential election, immediately responded, with the president calling the ruling “a victory for people all over this country whose lives will be more secure because of this law and the Supreme Court’s decision to uphold it.”

“We will continue to implement this law and we’ll work together to improve on it,” said Obama, speaking somberly in the White House East Room, the same setting he used to announce the 2011 death of al Qaeda leader Osama bin Laden.

“What we won’t do – what the country can’t afford to do – is re-fight the political battles of two years ago or go back to the way things were. With today’s announcement, it’s time for us to move forward,” Obama added.

Romney, who pushed through a similar healthcare overhaul at the state level in 2006 as governor of Massachusetts but opposed Obama’s law, called on voters to help him defeat the president in order to repeal the law critics derisively call “Obamacare.”

“If we’re going get rid of ‘Obamacare’ we’re going to have to replace President Obama. My mission is to make sure we do exactly that,” Romney said on the roof of a building overlooking the U.S. Capitol.

The healthcare law, known formally as the Patient Protection and Affordable Care Act, is the biggest overhaul of the $2.6 trillion healthcare system in about 50 years. It was signed by Obama in March 2010 and promptly put to the test in the courts by 26 of the 50 states and a trade group for small businesses.

The court’s decision largely vindicates Obama and Democratic lawmakers in their attempt to fix a system that, while representing 18 percent of the economy, leaves 16 percent of Americans uninsured, a fact that sets the United States apart in the industrialized world.

The U.S. system, unlike other rich countries, is a patchwork of private insurance and restrictive government programs. The United States pays more for healthcare than any other country, but about 50 million of the roughly 310 million Americans still have no insurance at all.

The Obama law was meant to bring coverage to more than 30 million of the uninsured and slow soaring medical costs.

The four dissenters, all from the court’s conservative wing – Justices Antonin Scalia, Anthony Kennedy, Clarence Thomas and Samuel Alito, took the unusual step of issuing one joint opinion and said they would have struck down the entire law.

Kennedy, summarizing the dissent from the bench, accused the court majority of “vast judicial overreaching. It creates a debilitated, inoperable version of healthcare regulation that Congress did not enact and the public does not expect.”

‘CHARACTERIZED AS A TAX’

Opponents said the individual mandate was an overreach by the federal government and that Congress had exceeded its powers. The court was deeply divided on this issue, but the majority ruled that Congress’s taxing authority allowed the mandate.

The law’s “requirement that certain individuals pay a financial penalty for not obtaining health insurance may reasonably be characterized as a tax,” Roberts wrote for the court’s majority.

“Because the Constitution permits such a tax, it is not our role to forbid it, or to pass upon its wisdom or fairness,” Roberts wrote.

In another part of the decision, the court said Congress went too far in a part of the law that requires states to expand the government’s Medicaid health insurance program for the poor with the goal of covering more of the uninsured.

The court said this problem can be fixed by precluding the federal government from stripping states of existing Medicaid funds if they did not comply with the expansion, and that this did not require striking down other parts of the law.

The court began its session much as it always does. At 10 a.m. sharp, the marshal’s familiar cry of “Oyez! Oyez! Oyez!” rang out as the nine justices entered through heavy scarlet drapes and took their seats at the tall mahogany bench.

The looks on their faces gave nothing away. As he took a seat, Chief Justice Roberts smiled slightly in the direction of the justices’ guest seats, where his wife, Jane, was sitting.

As he and other justices read statements, it became obvious that Roberts, appointed by Republican President George W. Bush in 2005, had been the crucial vote upholding Obama’s law.

Roberts showed he had taken control over a divided bench. He highlighted flaws in the administration’s arguments and stressed the majority was not commenting on the wisdom of the law.

Rather, he said, if it could be upheld, the court must uphold it. He said it was not the job of the judiciary “to save” the nation from policy choices made by elected legislators.

Romney and the Republicans had hoped the Supreme Court would gut the law. Deprived of that outcome, they can now continue pressing the attack on Obama on the campaign trail, but their hopes for a rollback or repeal will hang on legislation, unlikely before the elections, and on the voting public, whose views are mixed.

About 56 percent of Americans said they opposed the law in a Reuters/Ipsos poll released on Sunday. When asked about its individual provisions, however, most respondents said they strongly supported them, except for the individual mandate, which was opposed by 61 percent of those surveyed.

Most respondents in the survey favored banning insurers from denying coverage to people with pre-existing conditions; letting young adults stay on their parents’ insurance plans until age 26; and making companies with more than 50 workers offer insurance to their employees. All are parts of the law.

So are the creation of state-based exchanges to offer health insurance; insurance premium assistance to poor people; and insurance tax credits for those just above the poverty line.

Jamie Thompson of Harleysville, Pennsylvania, who has a daughter with cystic fibrosis, welcomed the ruling.

“My daughter’s healthcare costs a fortune. She’s 10. We haven’t gotten to the end of the line, but we’ve been told it’s not uncommon for cystic fibrosis kids to discover they’ve used up their lifetime benefit from healthcare,” he said. “It means she will have healthcare when she needs it.”

House of Representatives Speaker John Boehner, the top Republican in Congress, said, “Today’s ruling underscores the urgency of repealing this harmful law in its entirety.”

Eric Cantor, the No. 2 Republican in the House, said the House would vote on July 11 on legislation that would repeal the law. The Democratic-led Senate is certain to block any repeal legislation coming out of the Republican-controlled House.

Shares of hospital chains jumped, while large health insurer stocks fell after the ruling. Widening the pool of paying patients stands to benefit hospitals, which are often left to cover the high medical bills of the sick who have no coverage. 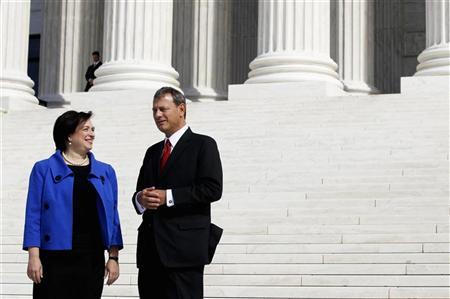 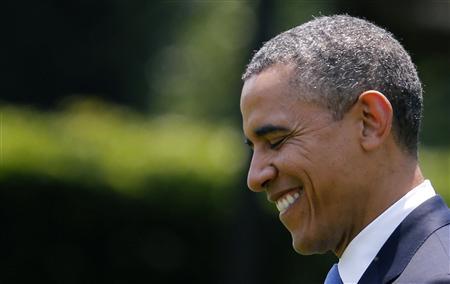