(Reuters) – A typhoon lashed Japan with torrential rain on Monday after killing at least one person, forcing the cancellation of flights and prompting warnings to more than 200,000 people to evacuate their homes before heading out to sea.

Three U.S. servicemen were swept away by high waves lashing the southwestern island of Okinawa on Sunday as Typhoon Phanfone approached. One was found dead and two were missing. A surfer was swept out to sea.

The storm brushed past the capital, Tokyo, and by early afternoon was out over the Pacific, leaving behind skies clear enough that Mount Fuji was clearly visible to the southwest.

Heavy rains had forced the cancellation of a search for victims of Mount Ontake, with 12 people still missing after an eruption last week killed at least 51. A score of households in the foothills of the peak were evacuated out of concerns that heavy rains could cause mudslides as ash was washed downstream.

Tropical Storm Risk, which tracks cyclones, labeled Phanfone a category one typhoon, the lowest rung on a scale of one to five, and said it was likely to weaken to a tropical storm later on Monday. It was category four as it approached.

Close to 200,000 households were urged to evacuate due to fears of landslides or flooding as rivers threatened to burst their banks. This included some 20,000 in Tokyo.

Wind blew heavy rain into sheets, booming between buildings in the city. A car in the neighboring city of Yokohama was buried in branches from a fallen tree. One part of the central city of Shizuoka had 9 cm (3.5 inches) of rain in an hour.

Six hundred domestic flights were canceled, with Japan Airlines saying it had canceled 19 international flights. Service west on the Shinkansen bullet train was briefly suspended and commuter train services were delayed or suspended in the capital, affecting millions of commuters.

Heavy rain delayed the Japanese Formula One Grand Prix on Sunday, which eventually saw two starts behind the safety car and ended before the full distance due to a crash in which French driver Jules Bianchi suffered a severe head injury. 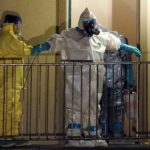 Dallas Ebola patient fighting for life, another headed to Nebraska 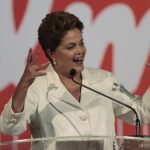 Top London Nightclubs And Pubs For A Breathtaking Students’ Night Out

As many as 700 migrants feared drowned in Mediterranean

No place like home: Cave in the Utah desert where man who has given up money lives 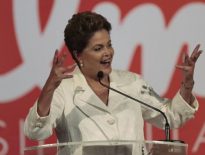 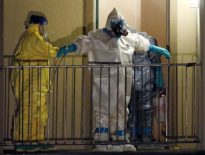 Health Dallas Ebola patient fighting for life, another he…