SEATTLE (AP) — Washington state plans to install within weeks a temporary fix for an interstate highway bridge that crumpled after being hit by a truck, tossing cars and people into a chilly river but causing only minor injuries. 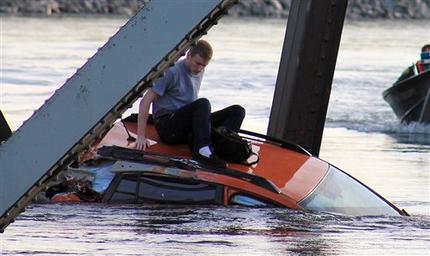 In this photo provided by Francisco Rodriguez, Bryce Kenning sits atop his car that fell into the Skagit River after the collapse of the Interstate 5 bridge there minutes earlier Thursday, May 23, 2013, in Mount Vernon, Wash. (AP Photo/Francisco Rodriguez)

Gov. Jay Inslee announced Sunday that the temporary spans for the Interstate 5 bridge will be installed across the Skagit River by around mid-June, if plans go well.

Barges with equipment to remove the mangled bridge and cars in the water arrived at the site and work was expected to start during the early hours Monday, the state Department of Transportation said.

It also came a day after the chairwoman of the National Transportation Safety Board called Thursday night’s collapse a wake-up call to the state of safety of the nation’s infrastructure.

The Washington state collapse, caused by the truck carrying an oversize load, fractured one of the major trade and travel corridors on the West Coast. The interstate connects Washington state with Canada, which is about an hour north of Mount Vernon, where the bridge buckled.

After the collapse, semi-trucks, travel buses and cars clogged local bridges as traffic was diverted through the small cities around the bridge. But overall, traffic was flowing as well as expected during the holiday weekend.

“We’re going to get this project done as fast as humanly possible,” Inslee, a Democrat, said Sunday. “There are no more important issue right now to the economy of the state of Washington than getting this bridge up and running.”

Inslee said he hopes the temporary spans, each with two lanes for northbound and southbound traffic, will be finished in about three weeks’ time. The spans will be pre-built and trucked to Mount Vernon.

The state plan also calls for a permanent span to be built and competed by autumn, officials said.

Officials say there are remaining inspections to the spans left standing to make sure they are safe to use.

The federal government is expected to cover 100 percent of the costs of the temporary bridge and 90 percent the replacement, said state Transportation Secretary Lynn Peterson.

The temporary span would be able to carry regular-sized cargos as well as cars. The speed limit would be lower than the 60 miles per hour allowed previously.

The three people were thrown in the water by the crash and survived with non-life threatening injuries.

An investigation by The Associated Press suggests similar accidents could happen elsewhere. Thousands of bridges around the U.S. are kept standing by engineering design, rather than sheer size or redundant protections. Such spans may be one freak accident or mistake away from collapse.

Bridge regulators call them “fracture critical” bridges, because if a single, vital component is compromised, they can crumple.

NTSB Chairwoman Debbie Hersman said such bridges and other kinds of bridges around the nation should be looked at.

“The wake-up call is really to focus on how important our infrastructure is to our nation, certainly for our commerce and keeping communities vibrant and connected,” she said Sunday, adding that when important decisions are made about infrastructure, safety should have “a seat at the table.”

Hersman said on Sunday said the bridge had withstood other over height collisions with vehicles in the past, with the most recent reported collision happening last October. She said evidence of other collisions can be seen in the spans still standing over the water.

The NTSB head also said that if the truck had been on the left lane of the southbound lanes, it likely would have cleared the bridge without a collision, but added that more precise measurements need to be taken. The bridge’s height clearance varies across it.

“We know the company was required to establish that they could clear the entire route,” Hersman said.

The truck’s cargo from Canada was headed to Alaska. Its plan was to load the cargo onto a barge in Vancouver, Wash., about 275 miles south of the border crossing. Hersman said she didn’t know why the plan called to use a port a couple of hundred miles away from other ports. 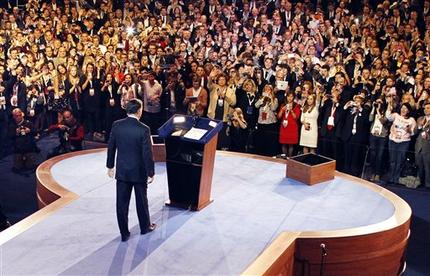 News GOP eyes Clinton ’92 win as it ponders how t… 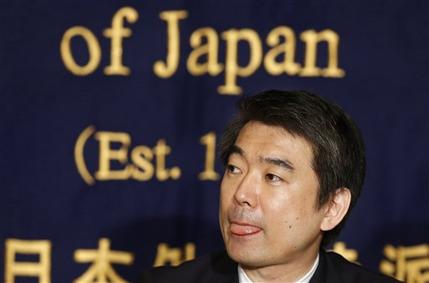