(Reuters) – With his presidential hopes riding on a win in Michigan’s pivotal Republican primary on Tuesday, Rick Santorum is taking a page from the playbook of influential conservative talkshow host Rush Limbaugh. 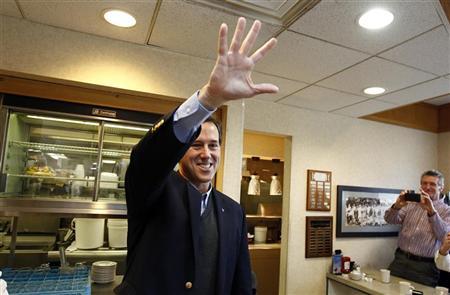 In an unusual move that has rival Mitt Romney crying foul, Santorum’s campaign has been bombarding Democrats and independents in the state with automated “robocalls,” urging them to vote for the Republican in Tuesday’s closely fought contest, which is open to supporters of both parties.

The strategy is reminiscent of the political trickery portrayed in the 2011 George Clooney thriller “Ides of March” and of “Operation Chaos,” the name Limbaugh gave to his 2008 plan to get Republicans to vote in open Democratic primaries.

Limbaugh’s reported aim was to prolong the bitter contest between Hillary Clinton and Barack Obama.

With polls showing Santorum within a hair’s-breadth of achieving an upset win in Romney’s home state, the stakes could not be higher on Tuesday. Pundits agree the contest will likely determine the political futures of both men.

Democrats and independents could help Santorum collect many of Michigan’s 30 delegates and give him a big win.

Some Democrats may vote for Santorum, a staunch social conservative, on Tuesday because they view him as a weaker potential challenger for Obama in the November 6 election than the more moderate Romney.

Others may do so to try to prolong the Republican nomination contest and bloody the eventual nominee.

Romney expressed alarm at Santorum’s invitation to Democrats to get involved in the Republican race. Accusing his rival of desperation and dirty tricks, he said the robocalls could tilt the primary in Santorum’s favor.

Political strategists, however, were more skeptical and expressed doubt that the robocalls would have any significant impact on voting patterns.

“I think it’s an easier pitch if you’re asking them (Democrats) to vote for a moderate Republican,” said Republican pollster Steve Mitchell. “As an example, 12 years ago when it was George W. Bush versus John McCain (in the primary) a number of Democrats voted in the Republican primary because they didn’t like the governor at the time, John Engler.

“This time, they’re being asked to vote for the most conservative candidate in the field and I just don’t think they’re going to be that successful.”

Democratic Party officials in Michigan acknowledge they have encouraged crossover voting, although not specifically for Santorum.

“If Democratic crossover votes affect the results of the GOP (Republican) presidential primary … the Republicans will only have themselves to blame,” Mark Brewer, chairman of the Michigan Democratic Party, said in an email to supporters.

But David Hopkinson, a 60-year-old auditor from East Lansing and a volunteer for the Obama campaign in Michigan, saw political peril for Democrats in trying to influence the Republican contest.

“I don’t think it is a good idea to try. God help us all if we have a President Rick Santorum,” said Hopkinson, who received the Santorum robocall and thought it came from a Democrat.

The Santorum robocall highlighted Romney’s opposition to the 2008 auto industry bailout and called it “a slap in the face of every Michigan worker.”

Aides for Santorum, who also opposed the auto bailout, dismissed Romney’s charge that they were engaging in dirty politics.

“There is nothing dirty about sending a robocall to the voters of Michigan saying we’re the most conservative, we’re going to fix the economy, vote for us,” said Hogan Gidley, a spokesman for the Santorum campaign.

Santorum’s campaign also said the robocalls were an effort to reach out to conservative Democrats who in the past had supported Republicans, including former President Ronald Reagan.

Michigan Democratic strategist Joe DiSano said he had earlier launched a campaign that identified roughly 12,000 Democrats and independents in Michigan who said they would vote for Santorum.

Obama campaign officials would not comment when asked if they were involved in asking Democrats to vote for Santorum.