Canadians on Monday mourned the shocking rampage that left 18 dead in rural communities across Nova Scotia, after a gunman disguised as a police officer opened fire on people hunkered down in their homes, setting houses ablaze in the deadliest mass shooting in the country’s history.

Officials said the suspect, identified as 51-year-old Gabriel Wortman, was also among the dead in the weekend attack. Police did not provide a motive for the killings.

The vast majority of Nova Scotians will have a direct link with one or more of the victims. The entire province and country is grieving right now as we come to grips with something that is unimaginable, Trudeau said.

The pandemic will prevent us from mourning together in person, but a vigil will be held virtually to celebrate the lives of the victims, Trudeau said, adding it would take place Friday night through a Facebook group.

Trudeau asked the media to avoid mentioning the name of the assailant or showing his picture.

Do not give this person the gift of infamy, he said.

Police began advising residents overnight Saturday in the rural town of Portapique, about 60 miles (100 kilometers) north of Halifax, to lock their doors and stay in their basements. The town, like all of Canada, had been adhering to government advice to remain at home because of the coronavirus pandemic and most of the victims were inside their homes when the attack began.

Several bodies were later found inside and outside one home on Portapique Beach Road, the street where the suspect lived, authorities said.

Bodies were also found at several other locations within about a 50-kilometer (30-mile) area from the neighborhood where the shootings began late Saturday, and authorities believe the shooter may have targeted his first victims but then began attacking randomly. Several homes in the area were set on fire.

Authorities said the suspected gunman wore a police uniform at one point and made his car look like a Royal Canadian Mounted Police cruiser.

That fact that this individual had a uniform and a police car at his disposal certainly speaks to it not being a random act, Mounted Police Chief Superintendent Chris Leather said. He said many of the victims did not know the shooter and authorities believe he acted alone.

According to his high school yearbook, Wortman long had a fascination with the Mounties.Gabe’s future may including being an RCMP officer, the yearbook profile said.

The dead officer was identified as Constable Heidi Stevenson, a mother of two and a 23-year veteran of the force. Another officer was wounded.

Also among the dead was school teacher Lisa McCully, who worked at a local elementary school. Nova Scotia Teachers Union President President Paul Wozney said. Our hearts are broken along with those of her colleagues and students at Debert Elementary, he said.

Two health care workers at local nursing homes were also among those killed, according to Von Canada, a long term health care company, which identified them as Heather O’Brien, a licensed practical nurse, and Kristen Beaton, a continuing care assistant.

Wortman, who owned a denture practice in in the city of Dartmouth, near Halifax, lived part time in Portapique, according to residents of the town.

Police initially said Wortman had been arrested Sunday at a gas station in Enfield, outside Halifax, but later said he had died. It was not clear how, and they did not provide further details, although one police official said that there was an exchange of gunfire between the suspect and police at one point.

Cpl. Lisa Croteau, a spokeswoman with the provincial force, said police received a call about a person with firearms late Saturday night, and the investigation evolved into an active shooting investigation.

Christine Mills, a resident of the area, said it had been a frightening night for the small town, with armed officers patrolling the streets. In the morning, helicopters flew overhead searching for the suspect. It’s nerve-wracking because you don’t know if somebody has lost their mind and is going to beat in your front door, she said. 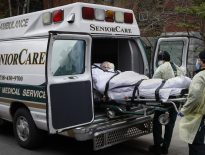 Health What you need to know today about the virus outbre… 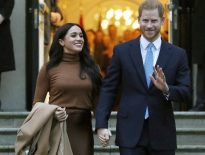