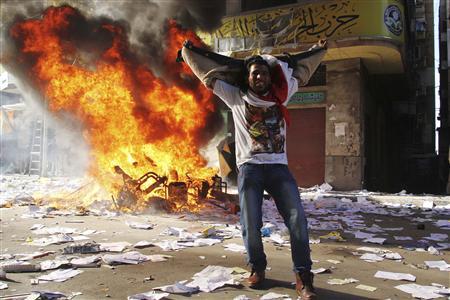 A protester cheers as items ransacked from an office of the Muslim Brotherhood’s Freedom and Justice Party burn in Alexandria November 23, 2012. REUTERS/Stringer

Police fired tear gas near Tahrir Square, heart of the 2011 uprising that toppled Hosni Mubarak at the height of the Arab Spring. Thousands demanded that Mursi should quit and accused him of launching a “coup”.

There were also violent protests in Alexandria, Port Said and Suez.

Mursi on Thursday issued a decree that puts his decisions beyond any legal challenge until a new parliament is elected. Opponents immediately accused him of turning into a new Mubarak and hijacking the Egyptian revolution.

“This is the point of no return for Mursi. He has dug himself deeper in a hole and won’t know how to get out of it,” said Ahmed Saleh, an activist who said many would stay in Tahrir square until Mursi withdrew the decree.

“The people want to bring down the regime,” shouted protesters in Tahrir, echoing a chant used in the uprising that forced Mubarak to step down.

The United States, the European Union and the United Nations expressed concern at Mursi’s move.

Mursi’s rivals condemned him as an autocratic pharaoh who wanted to impose his Islamist vision on Egypt.

“I am for all Egyptians,” Mursi said on a stage outside the presidential palace, adding that he was working for social and economic stability and remained committed to the revolution.

Egyptian judges will meet on Saturday to respond to Mursi’s move, which put him above the judicial oversight. The judges could threaten to go on strike, which would bring the judiciary to a halt.

Some non-Islamist political parties called for a million-strong march on Tuesday to demand that Mursi rescinds his decree.

But Islamist parties, including the Building and Development Party, accused Mursi’s opponents of undermining the democratic process that brought him to office.

“Those calling for the downfall of President Mohamed Mursi have rejected democracy because President Mursi has been democratically elected by popular will,” the party said in a statement. Mursi’s decree would “save the revolution from the remnants of Mubarak’s regime”, it said.

Buoyed by accolades from around the world for mediating a truce between Hamas and Israel in the Gaza Strip, Mursi on Thursday ordered that an Islamist-dominated assembly writing the new constitution could not be dissolved by legal challenges.

Mursi, an Islamist whose roots are in the Muslim Brotherhood, also gave himself wide powers that allowed him to sack the unpopular public prosecutor and opened the door for a retrial for Mubarak and his aides.

The president’s decree has consolidated his power but looks set to polarize Egypt further, threatening more turmoil in a nation at the heart of the Arab Spring.

In Alexandria, north of Cairo, protesters ransacked an office of the Brotherhood’s political party, burning books and chairs in the street. Supporters of Mursi and opponents clashed elsewhere in the city, leaving 12 injured.

A party building was attacked by stone-throwing protesters in Port Said, and demonstrators in Suez threw petrol bombs that burned banners outside the party building.

Although Washington has praised Egypt for its part in bringing Israelis and Palestinians to a ceasefire on Wednesday, it expressed reservations about Mursi’s latest move.

“The decisions and declarations announced on November 22 raise concerns for many Egyptians and for the international community,” State Department spokeswoman Victoria Nuland said in a statement.

The European Union urged Mursi to respect the democratic process, while the United Nationsexpressed fears about human rights.

“The decree is basically a coup on state institutions and the rule of law that is likely to undermine the revolution and the transition to democracy,” said Mervat Ahmed, an independent activist in Tahrir protesting against the decree.

Leading liberal Mohamed ElBaradei, who joined other politicians on Thursday night to demand the decree was withdrawn, wrote on his Twitter account that Mursi had “usurped all state powers and appointed himself Egypt’s new pharaoh”.

Almost two years after Mubarak was toppled and about five months since Mursi took office, Egypt has no permanent constitution, which must be in place before new parliamentary elections are held.

An assembly drawing up the constitution has yet to complete its work. Many liberals, Christians and others have walked out accusing the Islamists who dominate it of ignoring their voices over the extent that Islam should be enshrined in the new state.

(Additional reporting by Tom Miles in Geneva and Sebastian Moffett in Brussels; Editing by Giles Elgood) 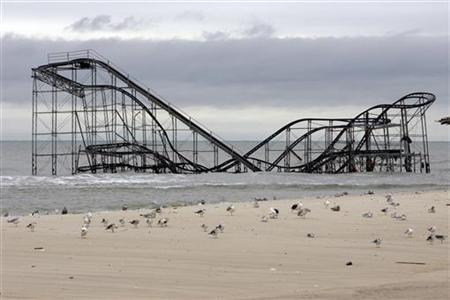