(Reuters) – Newt Gingrich kept his presidential bid alive on Tuesday with a landslide win in his home state of Georgia, but his southern strategy to fight back to the top in the Republican White House race looked shaky. 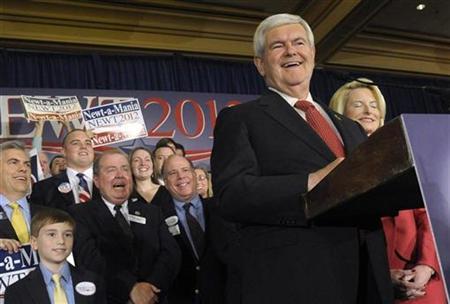 The former House of Representatives speaker won the Georgia primary – one of ten “Super Tuesday” contests – by 47 percent of the vote against second-placed Rick Santorum with 20 percent.

But Gingrich’s plan to become the southern candidate and recalibrate his flagging campaign took a hit when he slumped to third place in both Tennessee and Oklahoma.

In a victory speech in Georgia, where he represented a U.S. congressional district for 20 years, Gingrich was full of bravado for the race ahead for the Republican nomination to take on Democratic President Barack Obama in the November 6 election.

“We survived the national elite’s effort to kill us in the summer because of you,” Gingrich told supporters, referring to predictions that he was finished months ago when senior staff deserted him, complaining of a lack of focus.

Gingrich did stand to net a large number of the 76 delegates up for grabs in Georgia, the highest number at stake out of the 10 “Super Tuesday” contests.

But the Georgia win was less of a new start for Gingrich than a nice moment of nostalgia among old friends who had turned out to support him, said Emory University political science professor Alan Abramowitz.

“He got a big win in Georgia, and I’m sure he feels good about that,” Abramowitz said. “But realistically it’s hard to see where else he can win.”

Mississippi and Alabama hold primaries next week but Santorum has the momentum after coming close to defeating front-runner Mitt Romney in the main Super Tuesday battle in Ohio.

“I would expect Santorum to really come out tonight with the momentum in those two states,” Abramowitz said.

A February poll by Alabama State University showed Gingrich and Santorum running neck and neck in Alabama with around 18 percent each. Twenty-eight percent of Republican voters were undecided.

Gingrich, whose campaign peaked when he won the South Carolina primary on January 21, may struggle against Santorum in the fight for conservative and evangelical voters in those states.

Veteran Republican pollster Mark Rountree said the Georgia victory should help the Gingrich campaign pull in more donors and get a boost ahead of the southern contests.

“It gives him another week to continue to prove that he’s viable,” Rountree said. “He has to win Alabama or Mississippi to go on.”

Gingrich will need to raise money quickly. His Super PAC “Winning Our Future,” which has relied on donations from casino magnate Sheldon Adelson, has spend just under $300,000 in Kansas, which holds caucuses on March 10, about $480,000 in Alabama and some $324,000 in Mississippi.

Longtime Gingrich friend and colleague Mel Steely said the former House speaker’s campaign will continue “all the way” until the nominating convention in August, no matter the outcome next week.

“This thing isn’t locked up,” Steely said. “Newt’s strategy from the beginning was to get to the convention.”