Romney wrestles with GOP attacks on corporate past

MANCHESTER, New Hampshire (Reuters) – Mitt Romney is poised to take a big step toward the Republican U.S. presidential nomination on Tuesday by capturing New Hampshire, hoping to ride out last-minute attacks from his rivals and recover from a self-inflicted wound.

The former governor of neighboring Massachusetts carried a sizeable lead in polls into voting day, a sufficient cushion that should force rivals Ron Paul, Jon Huntsman, Newt Gingrich and Rick Santorum into a battle for second place.

Romney, 63, would be the first Republican who is not an incumbent president to win the first two early voting states, after his slim eight-vote victory over Rick Santorum a week ago in the Iowa caucuses. 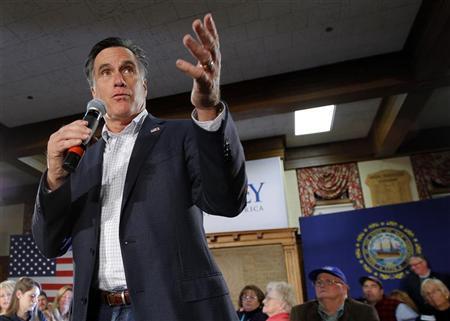 A more resounding win on Tuesday would give him momentum going into South Carolina on January 21 and Florida on January 31. He leads in both states and victories there could all but sew up his nomination to face Democratic President Barack Obama in the November 6 election.

“You’re going to make a big statement tomorrow, let’s take it to the next step, give me the boost I need, I hope,” said Romney in Bedford on Monday night at his final rally of the day.

It was unclear how much damage had been done by a mess of his own making in which Romney declared “I like being able to fire people,” in addressing his desire for greater competition between health insurance companies.

His opponents, Republican and Democratic alike, quickly seized on the comment as evidence of an out-of-touch politician and coupled it with attacks over his record at Bain Capital, a firm that bought companies and restructured them.

In a remarkable turnaround in a party known for being friendly to business, Republicans seeking to slow Romney down sounded more like populists as they bashed Romney’s work as a venture capitalist.

Gingrich, brooding over negative attacks from Romney and his backers that knocked him out of the front-runner position, has launched the toughest onslaught on Romney.

“Mitt Romney was not a capitalist during his reign at Bain. He was a predatory corporate raider,” says a video produced by a pro-Gingrich group.

New Hampshire voting stations close at 7 p.m. EST (midnight GMT). About 250,000 people are expected to vote in the Republican primary while 75,000 are likely to vote to endorse Obama’s re-election.

But not everyone was happy about voting for him.

Eli Haykinson of Bedford said he did not want to vote for Romney but might have to because he could have the best chance to defeat Obama.

“I personally don’t like his huge campaign style. You don’t really get to feel him at all. I don’t want to vote for him but I may have to,” Haykinson said.

Since victory looked out of reach for Romney’s rivals, they were waging a fierce battle to sway undecided voters their way in the final hours and win second place.

Both libertarian Representative Paul and Huntsman, a former U.S. ambassador to China, have been on the rise in recent days.

“It could be a bonanza,” Huntsman told CNN.

Former Pennsylvania Senator Santorum, who nearly won Iowa by appealing to social conservatives, has found that his message in New Hampshire is not attracting the same surge of support.

He and Texas Governor Rick Perry, along with Gingrich, are looking to South Carolina to challenge Romney as his conservative alternative.

Romney leads there for now but Gingrich backers have launched $3.4 million worth of ads in South Carolina to try to slow him down in the conservative state.

Romney wrestles with GOP attacks on corporate past