Santorum to Puerto Rico: Speak English if you want statehood

(Reuters) – Republican presidential hopeful Rick Santorum told Puerto Ricans on Wednesday they would have to make English their primary language if they want to pursue U.S. statehood, a statement at odds with the U.S. Constitution. 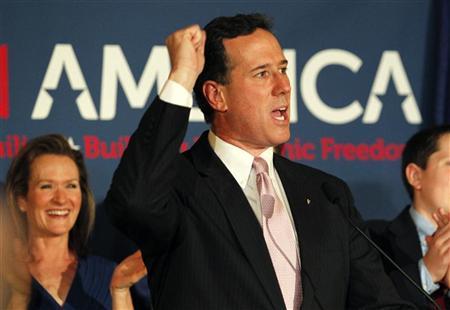 Santorum traveled to the U.S. territory to campaign ahead of the island’s Republican primary election scheduled for Sunday, where he, Mitt Romney and Newt Gingrich are vying for 20 delegates.

Puerto Ricans, who recognize both English and Spanish as their official languages, are scheduled to vote in November on a referendum to decide whether they want to pursue statehood or remain a self-governing U.S. commonwealth.

In an interview with El Vocero newspaper, Santorum said he supported Puerto Ricans’ right to self-determination regarding the island’s political status.

“We need to work together and determine what type of relationship we want to develop,” he told the newspaper.

But Santorum said he did not support a state in which English was not the primary language.

However, the U.S. Constitution does not designate an official language, nor is there a requirement that a territory adopt English as its primary language in order to become a state.

Congress would have to give approval if Puerto Rico is to become the 51st state. Although Congress has considered numerous proposals to make English the official U.S. language, none has ever passed.

However, some states have passed their own laws declaring English the official language, including heavily Hispanic Florida.

Puerto Rico has about 4 million people and its population can vote in partisan primaries but not presidential elections. Puerto Ricans on the mainland have the same voting rights as other U.S. citizens.

Santorum’s statement may fall flat with Puerto Rican Republicans, who have always argued that issues of language and culture should be controlled by state governments and not the federal government.

It also could alienate the 4.2 million Puerto Ricans who live on the U.S. mainland, including nearly 1 million in presidential swing-state Florida.

Romney and Gingrich have both said Puerto Ricans must decide their future for themselves. Romney has said that if they choose to pursue statehood, he would help them achieve it.

Romney, who is scheduled to travel to Puerto Rico on Friday and stay through the weekend, won the endorsement of Governor Luis Fortuno, who is also the head of Puerto Rico’s pro-statehood New Progressive Party.

Santorum was to meet with Fortuno on Wednesday before a town hall meeting with residents.

He said he and Fortuno are friends because they went to the same church in Washington when Fortuno served as Puerto Rico’s non-voting representative in the U.S. Congress from 2004-2008.

Santorum also said that he does not support “at this time” allowing residents in territories like Puerto Rico to vote for president, although he said he was open to analyzing alternatives, such as allowing their votes to count in the popular vote but not in the Electoral College.

Gingrich will send his daughter, Kathy Gingrich Lubbers, to campaign on his behalf in Puerto Rico on Thursday and Friday. She is fluent in Spanish and was expected to hold a town-hall style meeting.

(Reporting by Reuters in San Juan, with additional reporting by Jane Sutton in Miami; Editing by Bill Trott)

Santorum to Puerto Rico: Speak English if you want statehood