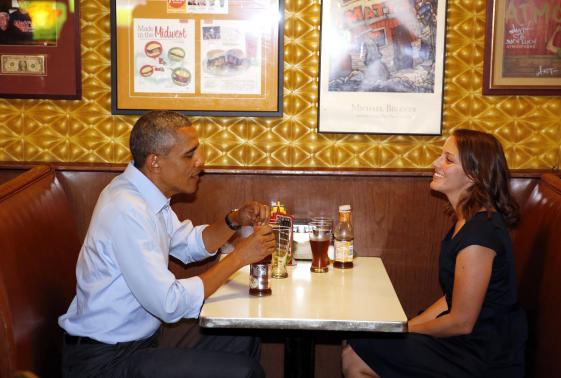 U.S. President Barack Obama visits with Rebekah Erler at Matt’s Bar, after receiving a letter from her explaining what it is like living in her shoes, in Minneapolis, Minnesota June 26, 2014. REUTERS/Larry Downing

(Reuters) – President Barack Obama spent a day in the life of a young Minnesota accountant struggling to make ends meet, but the road trip on Thursday quickly turned into a typical day in the life of Obama – one spent defending his actions and criticizing Republicans.

The trip, billed as the first in a series, was aimed at reconnecting Obama with Democrats ahead of midterm elections in November when Republicans stand a good chance of taking control of the Senate, jeopardizing his opportunity to accomplish goals for his last two years in office.

After Obama chatted with Rebekah Erler, 36, over a cheese-filled Jucy Lucy hamburger at the dark-paneled Matt’s Bar in Minneapolis, he drove for a town hall meeting to a city park where 350 invited participants were waiting.

They peppered him with questions about addressing gun violence and climate change, paring the cost of student loans, and encouraging girls to become scientists and engineers.

These were issues Obama loves to talk about, and the friendly crowd frequently applauded his answers, which were salted with stories about his family and childhood, and his frustrations trying to make changes in Washington.

You guys are the reason I ran, he said. You’re who I’m thinking about every single day and just because it’s not reported in the news I wouldn’t want you thinking that I’m not fighting for you.

A year and a half into his second term, Obama’s job approval ratings have slid to 41 percent, Gallup said on Tuesday, with voters concerned about the economy and the way the White House has handled the insurgency in Iraq.

This is the president’s attempt to show the public and the media that he hasn’t said lost touch with those who believed in him, despite what polls may show, said Peter LaMotte, a senior vice president at Levick, a public relations firm.

Erler, whose LinkedIn profile shows she was once a field organizer for Democratic Senator Patty Murray of Washington, wrote to Obama earlier this year to express her frustrations about the economy.

We just want to be able to pay for our kids’ daycare, pay for our house, feed our kids some fresh food, she told reporters, seeming somewhat overwhelmed by the throng of media who traveled with Obama.

I got the chance to start a conversation about what a lot of the people I know are going through, she said. Obama has campaigned relentlessly this year for populist issues like raising the minimum wage.

The other side has nothing to offer except cynicism and fear and frustration, Obama told a fundraiser for the Democratic Congressional Campaign Committee on Thursday evening, complaining that Republicans have focused the conversation in Washington away from everyday issues.

We talk about everything that doesn’t have to do with that young woman, Obama told the group of 60 people, who paid $10,000 to $32,400 for tickets to the dinner, held at the Minneapolis home of Sam Kaplan, Obama’s former ambassador to Morocco.

Politicians know there can be peril in being portrayed as out of touch with regular folks.

Republicans have sought to capitalize on an off-tone remark by Hillary Clinton, likely to be a Democratic presidential candidate in 2016, who this month described her family as dead broke after leaving the White House in 2000.

Republicans dismissed Obama’s day in the life trips as a public relations campaign.

You’ve got to be willing to talk to and listen to folks who might not agree with you for this sort of thing to actually make a difference, said Sean Smith, communications director for Republican Senator Tim Scott.

Scott regularly spends time with ordinary people in his home state of South Carolina, sweeping floors at a burrito shop, riding the city bus for a few hours – incognito. I definitely think he gets a much fresher perspective, Smith said.

White House spokesman Josh Earnest defended Obama’s approach. Our goal here is not to stage-manage something, he told reporters. Our goal is to give the president an authentic opportunity to see at least part of the world through the eyes of this one working mom in Minnesota. 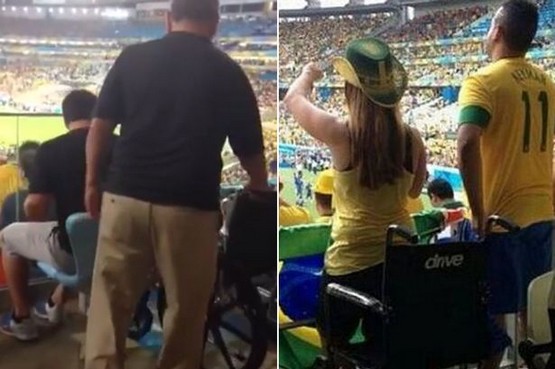