(Reuters) – This week’s arrival of NASA’s Mars rover Curiosity set the stage for a potentially game-changing quest to learn whether the planet most like Earth ever had a shot at developing life, but follow-up missions exist only on drawing boards. 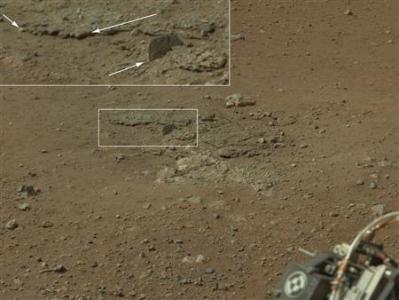 This color image from NASA’s Curiosity rover, taken August 8, 2012 and released by NASA August 12, 2012, shows an area excavated by the blast of the Mars Science Laboratory’s descent stage rocket engines. This is part of a larger, high-resolution color mosaic made from images obtained by Curiosity’s Mast Camera. With the loose debris blasted away by the rockets, details of the underlying materials are clearly seen. Of particular note is a well-defined, topmost layer that contains fragments of rock embedded in a matrix of finer material. Shown in the inset in the figure are pebbles up to 1.25 inches (about 3 centimeters) across (top two arrows) and a larger clast 4 inches (11.5 centimeters) long protruding up by about 2 inches (10 centimeters) from the layer in which it is embedded. REUTERS/NASA/JPL-Caltech/Handout

The United States had planned to team up with Europe on a trio of missions beginning in 2016 that would culminate in the return of Mars soil and rock samples to Earth, an endeavor the National Research Council considers its top priority in planetary science for the next decade.

Citing budget concerns, the Obama administration terminated NASA’s participation in Europe’s ExoMars program earlier this year, spurring the U.S. space agency to re-examine its options before another flight opportunity comes and goes. Earth and Mars favorably align for launches about every 26 months.

The situation is complicated by massive budget overruns in the $2.5-billion Curiosity mission, intended to determine if Mars could now or ever have supported microbial life, and in the $8 billion James Webb Space Telescope, a successor to the Hubble observatory.

Those overruns are partly to blame for leaving Mars exploration short of the multibillion-dollar commitment needed for another “flagship” mission of the scale it would take to fetch rocks and soil from the Red Planet and bring them home.

A NASA report due for release this month is expected to outline lower-cost alternatives for Mars missions that could launch in 2018 and 2020.

A second rover mission to follow up on Curiosity’s findings or to explore one of three other candidate landing sites originally identified for Curiosity would be “the next logical step,” said NASA’s Mars exploration program chief, Doug McCuistion. But he doubts he will have the money for it.

Although unlikely to draw a crowd to New York’s Times Square like Curiosity’s spectacular landing did, a new orbiting satellite to detect and analyze minerals or peer beneath the planet’s surface with infrared eyes would help scientists zero in on the best place for an eventual sample-return mission. It also would provide a welcome backup communications link for Curiosity and any future landers and rovers, scientists say.

“We have to address the overall goal that the (National Research Council) decadal survey set for Mars exploration, which is sample return,” NASA’s chief Mars scientist, Michael Meyer, told Reuters. “I suspect there are other things that we may do on Mars, but if they don’t help sample return they may be viewed as a non-starter.”

Related:  A new step in the world of technology
Powered by Inline Related Posts

Searching for evidence of life or its key ingredients on Mars, believed to have once been warmer and covered with water like Earth, is not the only rationale for a sample-return mission.

Detailed analysis of Martian minerals also could tell the story of what happened to the planet itself and why it ended up the cold, dry and acidic desert that exists today.

“The fact that you could look at all the information that’s in your samples, determine what environments it saw, is tremendous. There’s a lot of things that would really boost our understanding that have nothing to do with life,” he said.

Fresh off the heady days of its Apollo moon missions, NASA took a stab at a direct search for life on Mars with its Viking probes in the 1970s.

Most scientists chalked up the results as a big negative, and exploration of the fourth planet closest to the sun slipped into a 20-year hiatus.

Later, encouraged by discoveries of life in extreme environments on Earth, scientists returned to Mars with orbiters and a pair of small surface rovers, Spirit and Opportunity, to consider a tangential question: Since life on Earth depends on water, where did Mars’ water go?

Rather than focus on direct detection of living organisms or fossilized remnants, NASA’s strategy has been to “follow the water,” by looking for particular rocks and features that form when water is present.

Curiosity’s landing site in Gale Crater, located in the southern hemisphere near the planet’s equator, was selected in part because it is one of the lowest places on the planet.

“Water flows downhill, so we chose to go to a low place,” said John Grotzinger, a California Institute of Technology geologist who is the mission’s lead scientist.

At the center of the crater is a 3-mile- (5-kilometer-) high tower of layered rock, named Mount Sharp, which is believed to have formed from the remains of sediment that once filled the impact basin. During its planned two-year mission, the rover is expected to ascend Mount Sharp, analyzing and dating its rocks and soil and looking for niches that may once have supported, and perhaps still host, life.

That information, in turn, will sharpen planet-wide analysis of Mars that is obtained from orbital imagery and sensors.

“We’re going to get some ground truth to figure out the most interesting places to do sample return,” said NASA’s associate administrator for science, John Grunsfeld, a former astronaut.

The only other Mars mission in NASA’s pipeline at the moment is an atmospheric probe scheduled to launch at the end of next year. The agency plans to submit its follow-up Mars proposals to the White House in September, in time for the fiscal year that begins in October 2013. 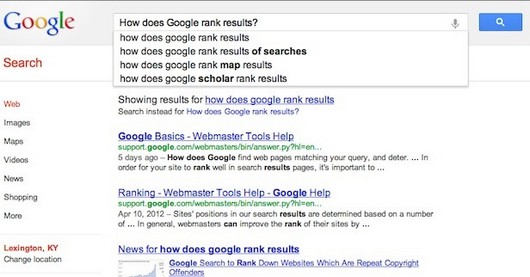 More Google Reveals Some Recent Changes To How It Ranks… 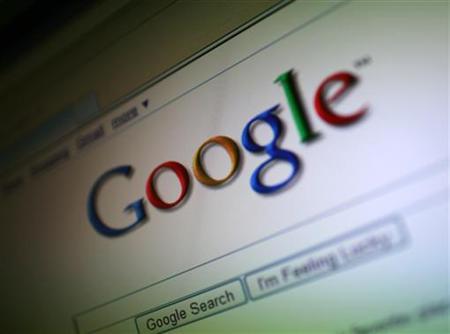