(Reuters) – Researchers studying a potentially more lethal, airborne version of the bird flu virus have suspended their studies because of concerns the mutant virus they have created could be used as a devastating form of bioterrorism or accidentally escape the lab. 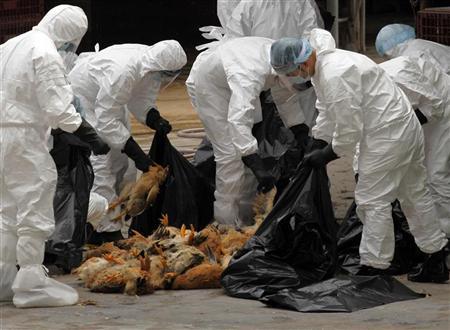 In a letter published in the journals Nature and Science on Friday, 39 scientists defended the research as crucial to public health efforts, including surveillance programs to detect when the H5N1 influenza virus might mutate and spark a pandemic.

But they are bowing to fear that has become widespread since media reports discussed the studies in December that the engineered viruses “may escape from the laboratories” — not unlike the frightful scenario in the 1971 science fiction movie “The Andromeda Strain” — or possibly be used to create a bioterror weapon.

Among the scientists who signed the letter were leaders of the two teams that have spearheaded the research, at Erasmus Medical College in the Netherlands and the University of Wisconsin, Madison, as well as influenza experts at institutions ranging from the U.S. Centers for Disease Control and Prevention to the University of Hong Kong.

For the full letter, see: bit.ly/yr4LeN

The decision to suspend the research for 60 days “was totally voluntarily,” virologist Ron Fouchier of Erasmus told Reuters. The pause is meant to allow global health agencies and governments to weigh the benefits of the research and agree on ways to minimize its risk.

“It is the right thing to do, given the controversies in the U.S.,” Fouchier said.

The U.S. National Science Advisory Board for Biosecurity in December had asked Science and Nature to censor details of the research from the Erasmus and Wisconsin teams that was submitted for publication.

Biosecurity experts fear that a form of the virus that is transmissible through airborne droplets–which the Erasmus and Wisconsin teams independently created–could spark a pandemic worse than the 1918-19 outbreak of Spanish flu that killed up to 40 million people.

“There is obviously a controversy here over the right balance between risk and benefit,” says virologist Daniel Perez of the University of Maryland, who signed the letter supporting the moratorium. “I strongly believe that this research needs to continue, but that doesn’t mean you can’t call a time out.”

The researchers’ decision shifts the focus of debate from whether the studies should be made public to whether they should have been done at all, given the theoretical possibility that a highly infectious virus could be stolen or escape from a lab. Some of the studies were funded by the U.S. National Institutes of Health.

Dr. Anthony Fauci, director of the National Institute of Allergy and Infectious Diseases at NIH, told Reuters that the decision to fund the research was justified.

“The proposal the investigators put forth to do this research was appropriate,” said Fauci, who was “actively involved” in the decision to call a moratorium on the research. “The value of the research is clear, as even the biosecurity board unanimously agreed.”

In its current form, people can contract H5N1 only through close contact with ducks, chickens, or other birds that carry it, and not from infected individuals.

Related:  Vitamin B12 screws with your skin bacteria and could cause acne
Powered by Inline Related Posts

But when H5N1 acquires mutations that allow it to live in the upper respiratory tract rather than the lower, it can travel via airborne droplets between infected ferrets, which are considered good models of how flu viruses behave in people.

The teams at Wisconsin, led by Yoshihiro Kawaoka, and Erasmus induced as few as three mutations that allow the virus to be transmitted through the air between ferrets. It is not known whether the mutant H5N1 can be spread between people in a similar way, by coughing or sneezing, since such experiments would be unethical.

But the fear is that the mutations that allow H5N1 to spread via the air between ferrets would allow it to do in people, making it exponentially more contagious.

To give the scientific community and governments time to determine whether the research can be conducted safely, the scientists write, “We have agreed on a voluntary pause of 60 days on any research involving highly pathogenic avian influenza H5N1 viruses” that produce easily contagious forms of the virus.

In particular, they wrote, no experiments with live, mutant viruses “already shown to be transmissible in ferrets will be conducted during this time.”

Fouchier noted in an essay published Thursday in Nature that other laboratories around the world may also be close to an airborne bird flu virus, and may not even be aware of it.

HOW SAFE ARE THOSE LABS?

Critics have more recently raised concerns over the safety of the physical environment in which the experiments were being conducted, in addition to the question over whether details of the research should be made public. For now, Science and Nature are withholding publication of the studies.

Nature reported last month that both experiments on mutant viruses were carried out in labs rated “biosafety level 3 (BSL-3) enhanced,” which “require scientists to shower and change clothes when leaving the lab, and include other safety features such as negative air pressure and passing exhaust air through high-efficiency particulate air filters.”

That is widely believed to protect against an accidental release of the virus. But some virologists argue that the more stringent BSL-4 precautions are needed. BSL-4, which is required for research on, among other microbes, the Ebola virus, includes full-body positive air-pressure suits like astronauts use. In the past, the SARS (severe acute respiratory syndrome) virus has escaped from BSL-3, and possibly BSL-4, labs.

“It’s a responsible decision to suspend work on these viruses while agreement is being reached,” said Peter Openshaw, Director of the Centre for Respiratory Infection at Imperial College London. “I hope that these issues can be resolved and that this vital work will continue under appropriate conditions and not be driven underground.”

Scientists and government officials are expected to meet in Geneva in February at the World Health Organization, to decide how research on mutant H5N1 should proceed.