China warns U.S. not to take sides in sea disputes

(Reuters) – China warned the United States not to get involved in South China Sea territorial disputes on Tuesday as U.S. Secretary of State Hillary Clinton arrived in Beijing pledging to pass on a strong message on the need to calm regional tension. 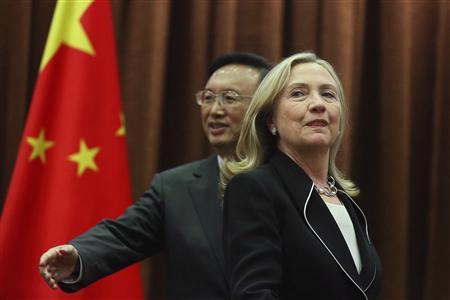 U.S. officials say Clinton will stress the importance of cooperation and partnership on the visit, an important chance to compare notes during a year of political transition in both countries.

But her visit has been overshadowed by disputes over tiny islets and craggy outcrops in oil- and gas-rich areas of the South and East China Seas that have set China against U.S. regional allies such as the Philippines and Japan.

Clinton arrived in Beijing from Jakarta late on Tuesday, huddling with U.S. officials on board her plane before heading off to meetings with Foreign Minister Yang Jiechi followed by a dinner.

In their brief public remarks, both Clinton and Yang stressed a constructive tone, with Clinton calling the U.S.-China relationship key to the Obama administration’s “pivot” to more engagement with the Asia-Pacific.

Despite sometimes bitter commentary in China’s state-run media, Yang pledged that Beijing would continue to work with Washington to forge “a new type of major country relationship”.

“China stands ready to work with the U.S. side, guided by the joint vision of our two presidents, to further push forward the China-U.S. cooperative partnership based on mutual respect and mutual benefit,” Yang said.

But Chinese Foreign Ministry spokesman Hong Lei suggested at an earlier news briefing that Washington has not been a helpful force in the maritime disputes, suggesting Clinton may face some push back in Wednesday’s talks.

Chinese newspapers, including Communist Party mouthpiece the People’s Daily, have suggested the South China Sea territorial claims are among Beijing’s “core national interests” – a term suggesting they share the same importance as sovereignty over Tibet and Xinjiang.

Clinton’s brief stop in Beijing follows several months of sharpening rhetoric over the maritime disputes, which involve the South China Sea and another string of islets claimed by both China and Japan.

In Jakarta on Monday, Clinton urged China and its Southeast Asian neighbors to move quickly on a code of conduct for the South China Sea and stressed that disputes should be resolved “without coercion, without intimidation, without threats and certainly without the use of force.”

But progress has been thwarted by China’s increasingly assertive posture, which has included establishing a garrison on a disputed island and stepping up patrols of contested waters.

That suggests Beijing has no intention of backing down on its unilateral claim to sovereignty over a huge stretch of ocean and potentially equally large energy reserves.

Clinton faces a balancing act in Beijing, pushing on the territorial disputes while keeping cooperation on track on other issues including reining in the North Korean and Iranian nuclear programs, the Syria crisis and economic disputes that have long bedeviled the two countries.

“One of the challenges before us is to demonstrate how we deal with areas in which we have different perceptions and where we face challenging issues on the ground, or in this case on the water,” one senior U.S. official said.

But some Chinese media have been blunt in their opposition to Clinton. The Global Times, a popular, nationalist tabloid, accused her of “deeply intensifying mutual suspicion”.

“Many Chinese people dislike Hillary Clinton,” it said in an editorial. “She has brought new and extremely profound mutual distrust between the mainstream societies of the two countries, and removing that will not be easy.”

Clinton will on Wednesday meet outgoing President Hu Jintao and Vice President Xi Jinping, the man who will likely succeed him as paramount leader following a Communist Party congress this year.

Xi visited the United States in February on a get-acquainted tour and U.S. officials expect him to be a steady-handed leader.

But concerns over China’s fast-expanding influence and its belligerent tone in the regional disputes have Washington scrambling to assess how Beijing’s political stars are lining up even as it ups its own presence in the region.

China, too, has its concerns and has pushed back against U.S. attempts to referee the South China Sea dispute and insert itself into similar rows between China, Japan and South Korea over the islands in the East China Sea.

While Washington has stressed that it takes no position on the competing claims and simply wants to see a mechanism established to resolve them, its forceful calls on China to play along have had a cool reception in Beijing.

(Additional reporting by Paul Eckert in Washington and Sabrina Mao and Ben Blanchard in Beijing; Editing by Nick Macfie and Alison Williams)

China warns U.S. not to take sides in sea disputes 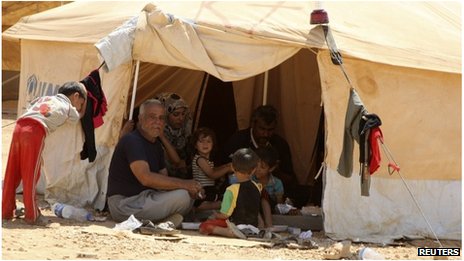 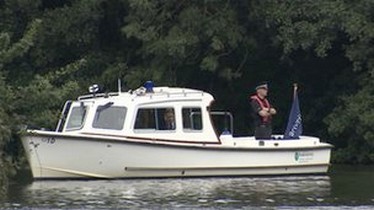