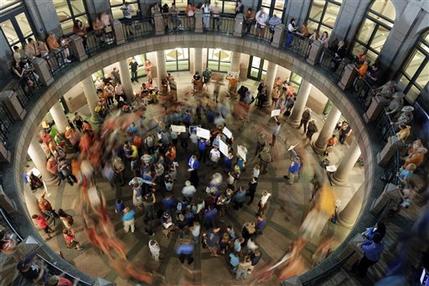 Opponents of an abortion bill walk in circles around supporters of the bill as a committee holds hearings on the bill near by at the Texas state capitol, Tuesday, July 2, 2013, in Austin, Texas. Gov. Rick Perry has called lawmakers back for another special session with abortion on the top of the agenda. (AP Photo/Eric Gay)

On a party-line vote, the Republican majority sent the bill to the full Texas House for a vote next week. Gov. Rick Perry is pushing his allies in the Legislature to move quickly after he called lawmakers back for a second special session to pass the bill, which would limit when, where and how women may obtain an abortion in the state.

More than 3,500 people came to the Capitol and registered a position on the bill, and more than 1,100 signed up to testify. But fewer than 100 people had a chance to express their views because the top Republican on the committee limited testimony to eight hours and refused entreaties to extend it.

“We took testimony in the regular session, in the first special. We’ve taken a lot of testimony,” said House State Affairs Chairman Byron Cook, R-Corsicana, in explaining his decision.

But Rep. Sylvester Turner, a Houston Democrat and among the state’s more senior lawmakers, asked for more time for testimony.

Just before the committee’s vote, Turner tried to offer amendments to the bill, but Cook refused to recognize him or any other Democrat.

“You can bring it up on the (House) floor,” Cook said.

Turner replied angrily to Cook cutting him off, “You know that’s just wrong!”

When the hearing began, the corridors were filled with equal numbers of bill supporters, wearing blue, and opponents, wearing orange, but as the night wore on the orange T-shirts became the majority. In some cases, bill opponents marched in circles around anti-abortion activists. There were no arrests or violent incidents reported.

Local pizza shops delivered hundreds of pizzas and drinks to the crowd, and organizers registered people to vote and collected email lists.

The debate over the abortion restrictions has brought the public to the Capitol like no other issue in at least a decade. About 700 of the bill’s opponents showed up for a hearing during the first special session, and thousands filled the Capitol on that session’s final day to support Democratic Sen. Wendy Davis’ filibuster.

After that session ended and the bill failed, Perry called the Legislature back, forcing lawmakers to start again from scratch with committee hearings.

House Bill 2 would ban abortions after 20 weeks of pregnancy, require that the procedure be performed at ambulatory surgical centers, mandate that doctors who perform abortions obtain admitting privileges at a hospital within 30 miles and that even nonsurgical abortions take place in a surgical center.

Only five out of 42 clinics in Texas qualify as ambulatory surgical centers, and they are in major metropolitan areas. Many clinics would need to relocate to meet ventilation requirements and to have the space required for operating rooms and hallways.

Similar measures have passed in other states, but many are tied up in court. Mississippi’s only abortion clinic remains open pending a federal lawsuit over the requirement for doctors to have admitting privileges.

Ellen Cooper, the top compliance officer for the Texas Department of State Health Services, was asked if there was any record of complications or deaths in abortion clinics that would suggest the regulations were needed. She replied no.

The Texas Medical Association, the Texas Hospital Associations and the American College of Obstetrics and Gynecology all oppose the bill.

Those who got the chance to testify offered frequently emotional or angry testimony. Some women shared how they felt their abortions were horrible mistakes, while others said their abortions gave them a second chance. Others cited the Bible in calling for a total ban on the procedure, and some told the lawmakers to stop interfering with their right to decide when or if they have children.

“In this country, we’ve forgotten about a big law: `Thou shall not kill,'” said Dorothy Richardson, representing the Houston Coalition for Life, in supporting the bill.

Gay Caldwell, who opposes the bill, said that protecting a woman’s health meant making sure abortions are legal and safe. 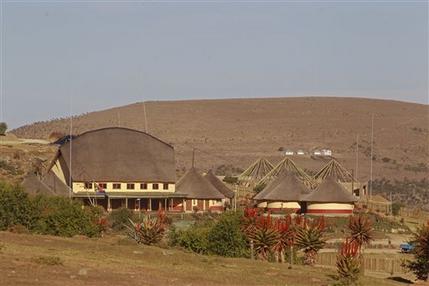