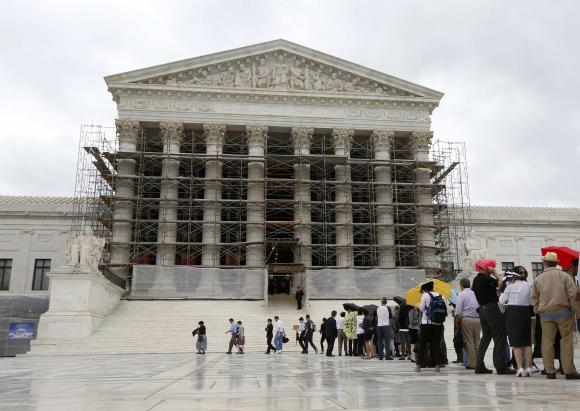 Visitors to the Supreme Court are pictured in the rain in Washington, October 7, 2013. The U.S. Supreme Court will this week step into the politically charged debate over campaign finance for the first time since its controversial ruling three years ago paved the way for corporations and unions to spend more on political candidates and causes. REUTERS/Jason Reed (UNITED STATES – Tags: POLITICS CRIME LAW)

(Reuters) – The U.S. Supreme Court on Wednesday struck down a key pillar of federal campaign finance law by allowing donors to give money to as many political candidates, parties and committees as they wish.

In the latest in a series of decisions by the high court that have given big-money donors more influence in U.S. elections, the justices rejected the overall limits on how much individuals can donate during a federal two-year election cycle.

The ruling – a 5-4 decision with the court’s more conservative justices in the majority – could have an immediate impact on the 2014 midterm elections, in which Republicans are likely to keep control of the House of Representatives and are seeking to gain six Senate seats to take over that chamber.

The decision does not affect rules that limit donors from giving $2,600 per candidate in primaries and another $2,600 in general elections. But it does eliminate the aggregate donation limits of $48,600 to candidates and $74,600 to state and local political party committees during each two-year cycle.

Instead of being limited to giving candidates and party groups a total of $123,200 for the 2014 elections, a wealthy donor who wanted to give the maximum amount to every House and Senate candidate and every political committee in his or her party could now give nearly $6 million, according to public advocacy groups.

It is the right of the individual, and not the prerogative of Congress, to determine how many candidates and parties to support, said Senate Minority Leader Mitch McConnell of Kentucky, a long-time critic of campaign finance restrictions who is in an expensive battle for re-election and was a litigant in the case.

Democrats, who typically argue for tighter restrictions based on concerns that the wealthy otherwise could have undue influence over American politics, blasted the court’s ruling.

I’m concerned about what it means for our democracy. Our founders, they sacrificed their lives, their liberty, their sacred honor for a democracy: a government of the many, not a government of the money, House Minority Leader Nancy Pelosi, a California Democrat, said during an appearance at the Reuters Health Summit in Washington.

It’s totally ridiculous. But that is the path that this court is on, Pelosi added, citing the court’s landmark 2010 ruling in Citizens United v. Federal Election Commission, which cleared the way for unlimited spending by independent groups in federal elections.

The Citizens United decision supercharged spending on the 2012 elections, as independent Super PACs and nonprofit groups created in the wake of the ruling – most of them Republican-leaning – spent nearly $1 billion on the presidential and congressional elections.

Such conservative groups failed in their push to oust Democratic President Barack Obama, but they did help reshape U.S. politics: In some cases the new, independent groups became as crucial to campaign funding and messaging as political parties.

Because it lifted some donation limits for parties, Wednesday’s ruling is likely to help the parties maintain their historical influence in campaigns even as independent groups continue to pour millions of dollars into elections, analysts and party officials said.

This allows us to go to our donors and say, ‘Look, instead of only being able to give to nine Senate candidates, you can give to the 14 that are most in play,’ Republican National Committee Chairman Reince Priebus said on a conference call.

In Washington, the ruling also could pressure lobbyists who form the backbone of the city’s fundraising circuit to write more checks to campaigns.

Tax lobbyist Ken Kies, who has already donated more than $123,200 to Republican candidates and committees, said Wednesday he was worried that he will be faced with a flood of fundraising pitches now that the donation cap is no longer in place.

Politicians’ reactions to the ruling reflected the crux of the arguments before the court, and the disagreements over campaign finance among the justices themselves.

Chief Justice John Roberts led the court’s majority in saying that the aggregate limits on campaign fundraising violated the First Amendment of the U.S. Constitution, which protects free speech. The majority also rejected the Obama administration’s contention that the limits are needed to fight corruption.

The caps on campaign donations do little, if anything, to address that concern, while seriously restricting participation in the democratic process, wrote Roberts, who was appointed to the court by former President George W. Bush, a Republican.

The disagreements between the justices in some ways boil down to how they define corruption – or the appearance of corruption – and how that is weighed against free speech protections.

Roberts and the other conservatives – Anthony Kennedy, Clarence Thomas, Antonin Scalia and Samuel Alito – have a narrow view of corruption, saying it only occurs when a politician does something in exchange for a donation. Unless the allegedly corruptive act reaches that level, it is trumped by the donor’s First Amendment rights, the theory goes.

The more liberal justices – Breyer, Ruth Bader Ginsburg, Sonia Sotomayor and Elena Kagan – have a more expansive view of corruption. In his dissenting opinion, Breyer wrote of the danger of corruption prompted by individuals with outsized influence.

Where enough money calls the tune, the general public will not be heard, he wrote.

In his court opinion, Roberts pointedly wrote that lifting the remaining limits on campaign donations was not at hand.

Campaign finance specialists and strategists who examined the ruling said it led them to believe that more changes are coming, however.

The narrow way that Roberts defined corruption led some election law specialists to predict that challenges to other campaign finance restrictions are likely.

Nothing is safe, said Rick Hasen, a professor at the University of California, Irvine School of Law.

Public Citizen, a consumer advocacy group that supports contribution limits, said before the ruling that a decision such as Wednesday’s would allow a single donor to write a $5.9 million check to a joint fundraising committee controlled by an elected politician or party official, who then could distribute the money to candidates and local or state committees.

Both parties already use joint fundraising committees to solicit large donations from wealthy donors, but the court’s ruling increases how much they can solicit from each person.

The Center for Responsive Politics, which tracks campaign contributions, has said that only a very small handful of people are currently close to reaching the existing caps for aggregate donations in the 2014 election cycle. According to the center’s data, only 591 donors nationwide gave the maximum allowable amounts to federal candidates in 2012.

The court was divided over how sweeping the ruling is.

Roberts wrote that the court did not reach the question of whether to overturn a key 1976 ruling, called Buckley v. Valeo, which upheld limits on campaign finance donations while also describing how courts should analyze such regulations.

Justice Thomas, who voted with Roberts, said the court had gone further than the chief justice claimed. The court had continued to chip away at the Buckley decision, Thomas wrote in his concurring opinion.

The aggregate limits on donations had been in place, in various forms, since 1974.

Wednesday’s case began when Republican donor Shaun McCutcheon, an Alabama businessman, and the Republican National Committee challenged the contribution caps. McCutcheon could give only the maximum amount allowable to a total of nine candidates before he hit the donation limit. 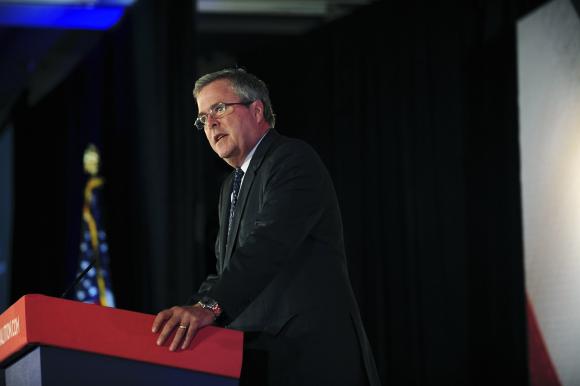 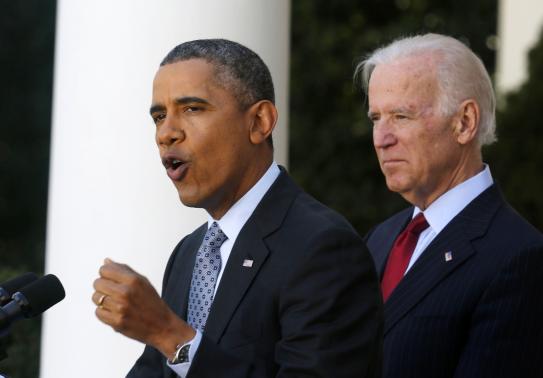