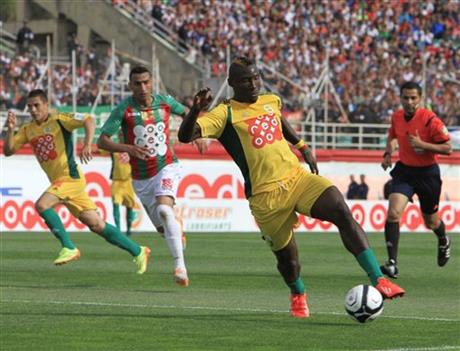 In this photo dated May 2, 2014, JS Kabylie striker Albert Ebosse of Cameroon controls the ball during the final of the Algerian soccer Cup in Blida near the Algerian capital, Algiers. Ebosse died after being hit in the head by an object thrown from the crowd at a top-flight league game in Algeria last August 23, 2014. Angry fans in Algeria pelted their own soccer team with rocks after they lost a game, killing the star player in the latest incident of fan violence in this North African country. Like much of the rest of the continent, Algeria’s restless youth are passionate about soccer but with little other outlet for their daily frustration, violence haunts the games. (AP Photo)

For football coach Hugo Broos, no other word is fitting for the death of his star player, Albert Ebosse. The deadly weapon was perhaps a rock, certainly something hard, heavy and sharp enough to fell a strapping 24-year-old in the prime of life. It appears to have been thrown, along with other projectiles, by so-called fans of his team, JS Kabylie.

Ebosse, from Cameroon, left behind family, a fiancee and their baby daughter to earn his living in Algeria’s top league and, with his goals, to offer the gift of football happiness for those same “fans” who seemingly now have his blood on their hands.

Hit twice, according to teammate Kamel Yesli, on the wrist and back of the neck, the leading scorer in Algeria’s top league last season was pronounced dead in a hospital, because of internal bleeding. Ebosse’s family is getting his body back this week.

And football gets another addition to its already bulging register of shame, filled with the names of hundreds upon hundreds of people killed around the world in decades of revolting hooligan violence, rioting, stampedes and other senseless tragedies in stadiums.

With the terrible hindsight afforded by Ebosse’s death last weekend, it is now clear that the Algerian national team’s impressive performance at the World Cup in Brazil — beating South Korea, reaching the competition’s knockout stage for the first time, playing attractive, intrepid football — was mere veneer. Because back in Algeria, the game is being hollowed out by habitual spectator violence. Algerian media reports analyzing Ebosse’s death describe a catalog of previous bloodshed: A player stabbed by marauding fans in 2001 and another in 2012; a former national team player beaten bloody this February; others beaten in March.

Just last season, Algerian police counted 600 people injured, 400 of them police officers, in 142 stadium incidents. YouTube footage of fans invading pitches and brawling, clambering over fencing and barriers, overwhelming security services, and of injured people being hurried away by stretcher-bearers looks disturbingly like the thankfully fading images from the era when hooligans terrorized football crowds in Europe, particularly England, in the 1970s and 80s.

No one should ever die at a football game. Those who govern football mustn’t allow any country to get away with killings in its stadiums, regardless of how rich or poor they are. Accepting arguments that some countries don’t have sufficient resources to make stadiums safe would be to accept the idea that some lives that are worth less than others, that fans in Africa, for example, should not expect and do not deserve the same care, safety and comfort that helped coax fans back to football in modernized stadiums in Europe.

One of the turning points against European hooliganism came when 39 people were killed at the 1985 European Cup final at Heysel Stadium in Belgium, when riots broke out and a wall separating rival fans of Liverpool and Juventus collapsed.

Ebosse’s death must be Algeria’s Heysel, the tragedy when enough really is enough. To help force change, the governing body of African football, CAF, must ban Algerian teams from its competitions, just as its European counterpart UEFA banned English clubs from playing in Europe post-Heysel.

With a large oil and gas industry and estimated foreign currency reserves approaching US$200 billion, Algeria can’t plead poverty. President Abdelaziz Bouteflika’s government has found the resources to keep him in power since 1999. With a shift in priorities, it shouldn’t be too much to ask that players and spectators don’t have to put lives and limb at risk at football games.

If such measures aren’t forthcoming, Broos, the Belgian coach of JSK, says he won’t be going back.

Revolted by Ebosse’s death — “It’s murder what happened in the game last Saturday,” he says — the veteran manager, who also played for Belgium at the 1986 World Cup, packed his bags and flew home from Algeria to be with his family. In a telephone interview from Belgium with The Associated Press, Broos said he doesn’t want his loved ones to worry that he might be hurt coaching at a JSK match.

“I have children, already grandchildren. I don’t think that I can ask from them that they will be every week here on the phone waiting for news, not only, ‘What was the result of the game’ but ‘How are you?’ This is crazy,” he said.

The first reaction to Ebosse’s death should be sanctions, he said: Ban them from African football, maybe from international football.

We had our tragedy here with Heysel, we had hooligans in England. This was the moment that changed things. So now the stadiums are safe in England, in Belgium, all over Europe. But not in Algeria. So I expect the same measures, Broos said.

If the measures are not coming, I will not go back to Algeria because it’s unsafe.

They need to react,” he added. “Let’s hope that the reaction is enormous.

John Leicester is an international sports columnist for The Associated Press. Write to him at jleicester@ap.org or follow him at http://twitter.com/johnleicester 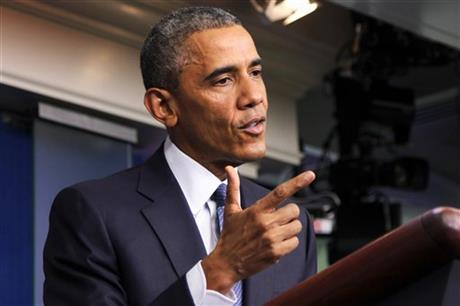 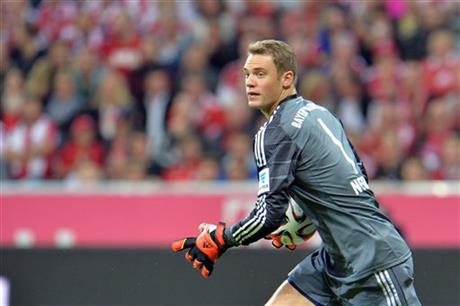