BERLIN — Some uninvited guests showed up at Kim Dotcom’s mansion outside Auckland, New Zealand, on Friday: the police, in two helicopters. 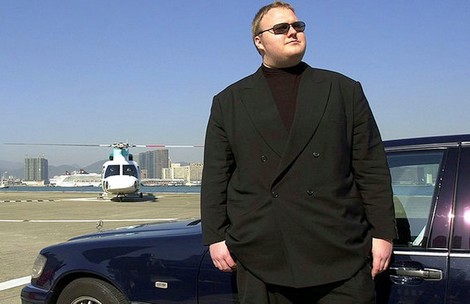 Kim Dotcom, the founder of Megaupload, in 1999. He was arrested on Friday in a raid, but while it was his most dramatic encounter with the law, it was not his first. By KEVIN J. O’BRIEN

They had an arrest warrant for Mr. Dotcom, 37, who was born Kim Schmitz and is accused by United States authorities with criminal copyright infringement through the Web site Megaupload, which he founded.

Finding their target was not easy. When Mr. Dotcom, who holds Finnish and German citizenship, first saw the police, he ran inside and activated several electronic locks, part of the estate’s sophisticated security system. As the police made their way through those, he barricaded himself in a safe room. Officers cut their way through to get him, standing near a firearm that they said looked like a sawed-off shotgun.

“It was definitely not as simple as knocking at the front door,” said Grant Wormald, a detective inspector.

In what the American authorities have called one of the largest criminal copyright cases ever brought, the Justice Department and the F.B.I. shut down Megaupload.com and instigated the arrest of Mr. Dotcom and three other people in New Zealand. In all, seven people connected with the site were charged with running an international enterprise based on Internet piracy.

The arrests come in the middle of a controversy over Congressional efforts in the United States to curtail Internet piracy.

Megaupload, a so-called locker service, allows users to transfer large files like movies and music anonymously over the Internet, and media companies have long complained that some files are being transferred in violation of copyright law.

A grand jury indictment says seven people in all were part of a criminal conspiracy involving Megaupload, charging each with five counts of copyright infringement and conspiracy. The possible penalty is 20 years in prison. The indictment says Megaupload caused $500 million in damages to copyright owners and made $175 million by selling ads and premium subscriptions.

The police in New Zealand said they were continuing to search the Auckland property. In all, about 20 search warrants connected to the case were executed in the United States and in eight other countries, including New Zealand.

About $50 million in assets were also seized, as well as a number of servers and 18 domain names that formed Megaupload’s network of file-sharing sites. The police said they seized 6 million New Zealand dollars ($4.8 million) in luxury vehicles, including a Rolls-Royce Phantom Drophead Coupé and a pink 1959 Cadillac. They also seized art and electronic equipment and froze 11 million dollars in cash in various accounts.

The arrest of Mr. Dotcom, the central figure in the case, was not his first encounter with the law.

In February 2001, Mr. Dotcom told Die Welt that he had spent three months in a Munich jail in 1994 and had served two years’ probation for breaking into Pentagon computers and observing real-time satellite photos of Saddam Hussein’s palaces during the Persian Gulf war of 1991. In the mid-1990s, Mr. Dotcom received a suspended two-year sentence for a swindle that made use of stolen phone card numbers.

In 2001, at the height of the dot-com hysteria, Mr. Dotcom was accused in what was then the largest insider-trading case in German history. Prosecutors in Munich said he bought shares in a struggling online business, letsbuyit.com, then announced that he planned to make a major investment in the company and rescue it from insolvency.

Mr. Dotcom reportedly made more than $1 million when the shares soared.

Around that time, Mr. Dotcom, then still going by his former name, disputed the accusations mounting against him during an appearance on the Harald Schmidt Show, a popular late-night talk show in Germany.

“It is true that I offer a lot of open flank to attack because of my lifestyle and the public way I live with my success,” a congenial Mr. Dotcom, with a crew cut and black clothing, said. “It’s clear that that’s why people are looking for things to hang on me.”

Mr. Dotcom eventually fled Germany to escape those charges but was captured in Thailand, extradited and convicted in 2002. He spent five months in jail awaiting trial but received a suspended sentence on the underlying charges.

Mr. Dotcom dropped from view until last year, when German newspapers started reporting rumors of his luxury compound in New Zealand and possible involvement in Megaupload.

In the German television interview, which is posted on YouTube, Mr. Dotcom attributed the rumors swirling around him to a German tendency to envy those who have more. “If I were in the United States, I would be just one of many with my lifestyle and would not draw any attention to myself,” Mr. Dotcom said.

Mr. Dotcom and the three others who were arrested in New Zealand appeared in court Friday afternoon and were denied bail. Extradition proceedings will continue Monday.