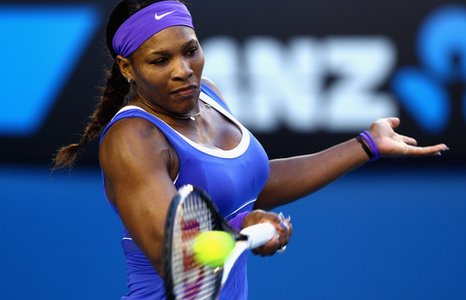 Williams has won her last 17 matches at Melbourne Park

The 12th seed wrapped up the win in under an hour and will now face Russia’s Ekaterina Makarova who beat seventh seed Vera Zvonareva.

Fourth seed Maria Sharapova secured her place in the fourth round with a 6-1 6-2 win over German Angelique Kerber.

American Williams, who won the Australian open in 2009 and 2010 but missed last year’s tournament through injury, lost the opening game of her encounter before reeling off six straight games to take the first set.

Despite only landing only half of her first serves, Williams, who is playing in only her second tournament since the US Open last September, secured a further three breaks to wrap up the match in 59 minutes.

Kvitova, who could unseat Caroline Wozniacki as world number one by the end of the tournament will take on Ana Ivanovic, who held top spot in the rankings for 12 weeks in 2008, in the next round.

“I’m a little disappointed. I played the first set very well but it was unfortunate it was like this,” said Kvitova of her win over Russian world number 29 Kirilenko who had her thigh strapped before conceding defeat with 38 minutes on the clock.

The Czech second seed had been taken to three sets in the previous round by Carla Suarez Navarro, but her powerful ground strokes looked too much for Kirilenko even before her opponent called for medical attention at 5-0 adrift in the opening set.

Sharapova had dropped just two games in swift wins over Gisela Dulko and Jamie Hampton in her first two matches and looked set to progress in similar style as she broke early in the second set against Kerber.

But the 2008 champion was pegged back as Kerber wrestled the third and fourth games of the set her way.

Sharapova responded with steely determination though, edging back in front at 4-2 before securing her passage to the next stage with another break.

There will be more German opposition for her in the last 16 where she will meet 14th seedSabine Lisicki in a repeat of the pair’s 2011 Wimbledon meeting.

Zvonareva was out-fought 7-6 (9-7) 6-1 by Makarova as she became the highest-seeded player to exit the event since Sam Stosur’s first-round exit.

The 24-year-old, who lost to eventual winner Kim Clijsters in the semi-finals last year, has had a slow start to 2012, losing in the first round of the Sydney International.

Zheng will play Italy’s Sara Errani who followed up her victory over 29th seed Nadia Petrova last time out with a 6-7 (6-8) 6-0 6-2 win over Romania’s Sorana Cirstea to make a Grand Slam fourth round for the first time.

Ivanovic saw off American Vania King 6-3 6-4 to book her place in the same stage.