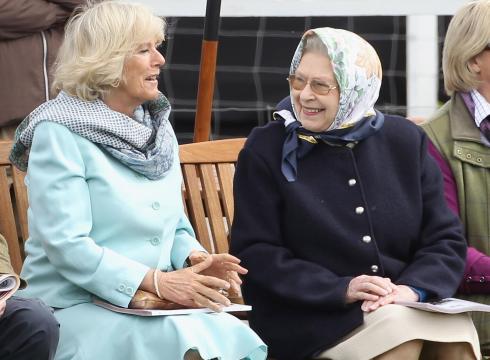 The announcement that Camilla has been made a Dame Grand

Cross comes on the day of her seventh wedding anniversary with Prince Charles, the queen’s son.

Royal Victorian Order, which was founded in 1896 by Queen Victoria, are given by the queen to people who have

served her or the monarchy in a personal way. They are bestowed independently of the prime minister’s office.

vilified as a the old flame who poisoned Charles’ first marriage to Princess Diana, Camilla has become an integral member of the royal family since she married the prince on April 9,

Since the couple’s civil ceremony at the Guildhall in Windsor, the British

She also has traveled extensively with the prince on official visits, including a recent tour of

Scandinavia with stops in Copenhagen, Stockholm and Oslo.

Lately, Camilla was seen stepping out with the queen and the

Middleton— who married Prince William— for an appearance in

Buckingham Palace said Camilla will be invested with the insignia of her rank at a later date.