On the Verge with hip-hop artist K’Naan of Somalia 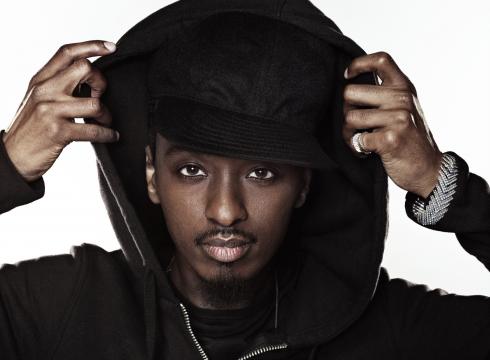 On the Verge with hip-hop artist

hip-hop artist K’Naan is soft-spoken. But his music, which he describes as “folk, reggae and rap that all falls into one

poetic pot,” has been heard loud and clear around the world for years, most notably with his breakout hit Wavin’

Somalian native on an 86-country tour. “The diversity of the audiences made me realize how unifying that song is,” says the

34-year-old. “There was something about it that has touched a nerve in the world.”

here? With his new single, Is Anybody Out There featuring Nelly Furtado, which peaked at No. 29 on USA TODAY’s Top 40 chart, and an upcoming album Country, God Or the Girl

(out June 5), which includes collaborations with Bono, Will.i.am., Nas and Keith Richards, the forecast of stateside fame is sunny.

“I met Bono last year in Minnesota at a U2 concert.

The band was gracious enough to ask me to perform with them,” he says. “And then we got to be friends, working together to

raise awareness about the famine in Somalia. When I wrote Bulletproof Pride, Bono fell in love with it and

contributed greatly for my new album. There’s nothing like one of your works being embraced by one of your

Opening up: “My work is known for being about world politics, personal and intimate, but

never about me,” says K’Naan, born Keinan Abdi Warsame. “This album is my most personal yet. A friend said that the album

sounds like I’ve gone through heartbreak, and that’s true.” As a child, K’Naan witnessed the murders of his friends, and

on the album he acknowledges that love can be just as painful. “This record is about relationships and internal conflict,” he

says. “Unlike war, it’s not always about who is winning and who is right. In that way, love is harder.”

horrors of war: Born in Mogadishu, Somalia, K’Naan comes from a family of artists: His grandfather was a poet and

his aunt was a famous singer. Up until civil war broke out in 1991, K’Naan says he had a happy, normal childhood. But when

he was 12, a soldier opened fire on him and his classmates, killing three of his friends and miraculously missing him. “The

bullets hit everyone but me. A few months later, my immediate family and I were lucky enough to get seats on the last

commercial flight out of Somalia.”

in Toronto, where he learned English by listening to ’90s hip-hop. “When I was a teenager, I was diagnosed with PTSD

and the doctors suggested that I take medication, but my mom didn’t want that,” he says. “She wanted me to use music and

poetry to figure it out on my own. Eventually music became the small piece of light coming through a canvas of darkness. It

became my instrument to dealing with the trauma.”

Speaking out: K’Naan got his first taste of fame

his manager, Sol Guy, got him a gig to perform for the High Commissioner for Refugees. “When I stood up there

I thought, most people in my country will never have the voice to be heard by the U.N. But I did. So I took it; I did a poem criticizing the U.N. for

its failed aid missions to Somalia,” he says. “I figured that ended any possibility of a musical career for me. But it was

the true and honest thing to do.”

By yet another stroke of luck, Senegalese star Youssou N’Dour was in the audience. He was so impressed that he invited K’Naan to work on his 2001 album, Building

Bridges, and to go on tour.

Going home: Twenty years after he fled, K’Naan returned to

Somalia last year to help bring media attention to the crippling famine. “For me, it was wonderful to see that even if the

buildings have fallen, the humanity of the people had not diminished,” he says. As his fame continues to grow, K’Naan hopes

he can continue to spread awareness about the plight. But there’s another, more important message in his music. “Because of

what I’ve seen, my life is inseparable from my work. Somalia is not a place of villains and victims, of pirates and

defenders of the water — there are human nuances, like everywhere else,” he says. “There is a beauty that’s hidden in all

the smoke and tragedy of war.”

On the Verge with hip-hop artist K’Naan of Somalia