Jesse James has ‘no place’ in his life for women

Jesse James is done with

women. For the moment, anyway.

famous for marrying and then cheating on Sandra Bullock in 2010, only to get engaged and then split with tattoo artist Kat 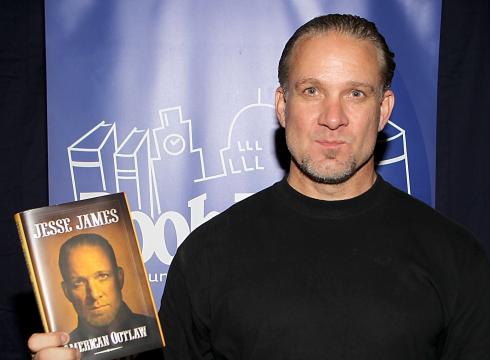 “Being a single dad, I don’t really have a place for it,” he says. His

life, he says, “was blown apart by a big atom bomb.” And that “made me realize what’s really important. I don’t, like, hate

women or anything, I just really honestly have been in a relationship since 1990. I need to like devote myself to my kids and

my shop and my skills and make stuff.”

Adds James, who checked into a treatment facility to deal with “personal

issues” after his split from Bullock, “It’s weird for everything that’s happened to come out better. And to feel great.

He wouldn’t recommend people follow his path, though. “I wouldn’t suggest to anyone to go that route.

Everything happens for a reason. I learned a lot about myself.”

Such as? “Family first, work second.”

where he had 175 employees working for him, building custom bikes and cars.

toilet paper!” he says. So he closed the place, left town and set up The Austin Speed Shop in Texas, where he has 12

employees, plus two who work at his house garage. Although Bullock lives in Austin with baby Louis, the son she was adopting

right around the time they split, James says “no,” he never sees either of them. Instead, he’s focusing on his own three

kids (teens Chandler and Jesse Jr. with his first wife and Sunny, 8, with his second wife) their dogs (two pit bulls and a

French bulldog) and the newest addition to the family — a micro-mini pig named Bubbles.

And now the former Monster

normally take a year. He hopes that it will become a 20-episode series for Discovery.

“This is more soulful,” he says.

But he’s still showcasing a pressure-cooker situation. “On Monster Garage, I put the screw to people and made them

do impossible projects. This shop has never been tested.”

So he plans to test them in this special. “I like everything

to be drama-free, but in the heat of the battle there’s always going to be stuff happening.” He promises we’ll see how it

all really unfolds. “I’ve prided myself in 13 years in TV I’ve never faked or staged anything. If someone (screws) up,

that’s the way it is. I think the show captures a lot of that.”

Oh, and speaking of women, James says, “There’s a

couple kids in the shop girls are going to fall in love with, for sure.”

Jesse James has ‘no place’ in his life for women