Forget glamour girls Jessica Chastain versus Jennifer Lawrence. By the end of a long Oscars telecast, the only person who could have stolen the fashion conversation was first lady Michelle Obama – and she did. 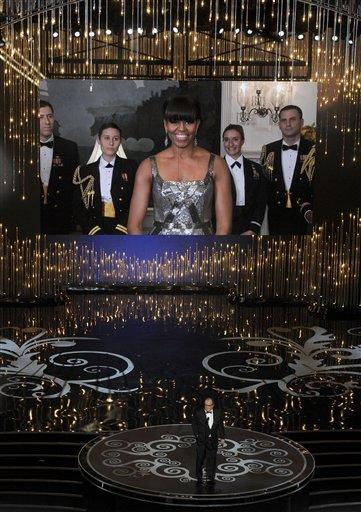 First lady Michelle Obama, appearing on screen, and actor Jack Nicholson present the award for best picture during the Oscars at the Dolby Theatre on Sunday Feb. 24, 2013, in Los Angeles. (Photo by Chris Pizzello/Invision/AP)

She presented the best picture award almost at the stroke of midnight Sunday via video stream in a silver Naeem Khan gown. It was the sort of Cinderella style moment that red-carpet watchers hunger for.

Until then, the most heated chatter about the Academy Awards likely was the boldface battle between Giorgio Armani and Dior Haute Couture.

Armani could claim some big wins: the designer dressed Chastain, Naomi Watts and Quvenzhane Wallis. Dior dressed Lawrence and Charlize Theron – both are spokesmodels – who hit it right in white.

“I chose it because to me it was a throwback to old Hollywood,” she said. “It’s a very `Happy birthday, Mr. President’ dress.”

Watts wore a gunmetal beaded gown with a geometric cutout on the bodice, also by Armani.

Quvenzhane (kwuh-VEHN’-juh-nay), with a silver headband in her hair and carrying a bedazzled puppy purse, wore an Armani Junior navy-blue dress with black, navy and silver jewels scattered on the skirt and a big bow on the back. She had another Armani dress, a pink one, ready for the afterparty. “I liked it because it was sparkly and puffy.”

Lawrence was the belle of the ball in a white-and-pale pink strapless gown with fitted bustier and poufy hemline, sophisticated pulled-back hair, diamond-ball earrings and a delicate long necklace that hung down in back. The long train gave her trouble as she went to accept her award for best actress. She stumbled as she approached the stage to accept her Oscar.

Theron was sleek in an angular strapless dress with a fashion-right peplum and a buzz-cut hairdo.

Christos Garkinos, longtime red-carpet watcher and owner of Decades vintage store in Los Angeles, said, “You could have turned the TV off right when Charlize Theron came on. She was perfect.”

The more interesting chatter, however, could be about the Jane Fondas and Sally Fields of the world. Fonda wore bright taxicab yellow Versace and Sally Field was in bright red.

Related:  The top 5 moments of the Tonys telecast
Powered by Inline Related Posts

Garkinos wasn’t as kind. Thanks to some awkwardly placed darts in the bust, he said it was more like Gwyneth Paltrow’s big Academy Awards moment, when she wore a lovely Ralph Lauren pink dress but the fit wasn’t quite right.

Hathaway, before the show, said her dress with a seemingly sweet vibe but with a strategically open back and sexy sides, was a last-minute choice. “It fit my mood and place where I’m at right now.”

It almost seemed there were two routes to the red carpet, said Rubenstein: incredibly beaded and eye-catching, worn by Nicole Kidman in L’Wren Scott, Halle Berry in Versace, and Stacy Keibler in Naeem Khan; or a simple color with a great silhouette. He puts Lawrence, Reese Witherspoon in a strapless royal-blue Louis Vuitton gown with a black strip at the bustline and Jennifer Aniston in a Valentino red strapless gown in that camp.

“For some, there was a pull back to not do a lot, and that’s where fashion is as well,” Rubenstein said.

Amanda Seyfried’s metallic halter dress by Alexander McQueen with a keyhole opening was three months in the making, and Berry said she trusted Donatella Versace to dress her like the Bond girl that she has been on the big screen. She ended up in a silver beaded-and-black gown with long sleeves and V-neck.

Kristen Stewart had an even paler blush gown; hers a hand-beaded strapless with tulle inserts by Reem Acra. She accentuated her gown with a 19th-century Fred Leighton necklace with 91 graduated diamonds.

Jennifer Garner chose a violet-colored Gucci with cascading ruffles in the back. Her 200-carat diamond-and-dark platinum necklace from the Neil Lane archives was a big statement.

Beaded gowns had a strong presence, worn by Sandra Bullock, in a fully embroidered Elie Saab; Renee Zellweger, in a sleek Carolina Herrera; and Adele in Jenny Packham. Catherine Zeta-Jones was statuesque in an all-gold Zuhair Muhad. Queen Latifah’s white V-neck tank dress by Badgley Mischka had a lot of sparkle on the straps.

Helen Hunt wore a little bit of her conscience along with her blue column gown. It was from fast-fashion retailer H&M. She chose it because it was both accessible and because the company has launched a substantial green initiative. She did wear it, however, with hundreds of thousands of dollars of borrowed jewels.

For the men, the trend was beards, with George Clooney, Bradley Cooper, Ben Affleck and Tommy Lee Jones, among them. 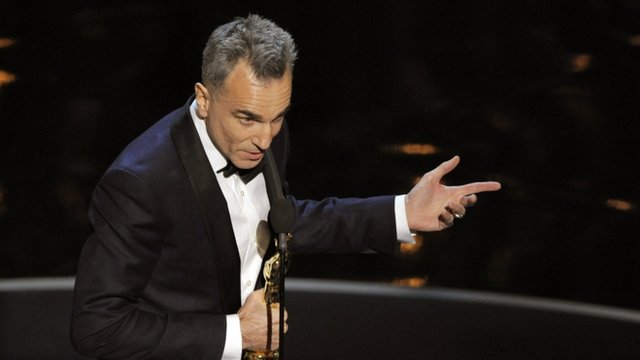 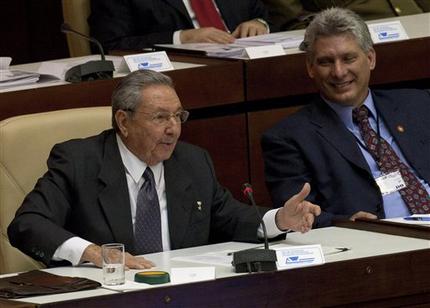