(Reuters) – Republican front-runner Mitt Romney defended his leadership on Thursday of a private equity firm at the center of a raging campaign battle in South Carolina over whether while its chief executive he was a job killer. 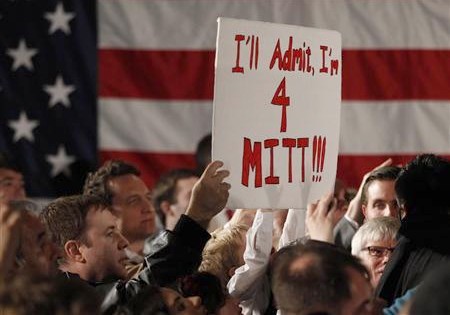 A supporter of Republican presidential candidate and former Massachusetts Governor Mitt Romney holds up a sign as he meets with supporters at the Hall at Senate's End in Columbia, South Carolina, January 11, 2012. Credit: Reuters/Jason Reed

Romney is facing attack ads from rival Newt Gingrich in South Carolina over his tenure at Bain Capital, a private equity outfit that bought and restructured companies, sometimes resulting in the loss of jobs.

The objective of Gingrich along with a fellow conservative candidate, Rick Perry, is to try to stop Romney’s momentum toward the 2012 Republican presidential nomination after his victories in Iowa and New Hampshire.

A victory in South Carolina on January 21 would put Romney well on his way to the nomination.

“A few thousand jobs” were lost from failing enterprises, he said.

The Bain charges, if they stick, could damage Romney’s ability to sell himself as a former executive with more experience in creating jobs than his Republican rivals or than Democratic President Barack Obama, whom he hopes to challenge for the White House this November.

“I think people want to see a hands-on. ‘get-the-job-done’ leader and I’ve demonstrated that,” he said.

Bain is only one potential minefield for Romney as he seeks to make it three wins in a row in South Carolina — and as his conservative rivals try to stop him.

Another problem for Romney is his stand on abortion. He is facing criticism of changing his position from in favor of a woman’s right to choose whether to have an abortion to opposing the procedure.

To stress that point, Romney made a point of mentioning his desire to preserve “life” three times in his speech to a crowd at the motorcycle shop.

“I understand that there are some attack ads coming my way that question that, and obviously it’s important for me to remind people that I’m pro-life,” he told reporters later.