By Ed Stoddard and Agnieszka Flak

JOHANNESBURG (Reuters) – A series of wildcat miners’ strikes in South Africa spread to a new sector, iron ore, on Wednesday and hit another gold firm in an escalation of the labour unrest that is testing President Jacob Zuma’s leadership. 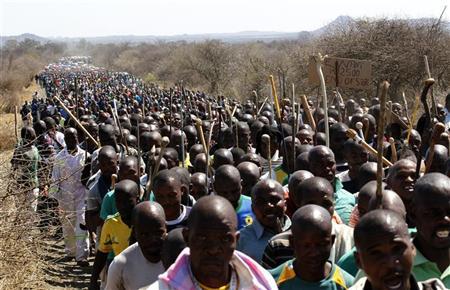 Mine workers take part in a march at Lonmin’s Marikana mine in South Africa’s North West Province September 10, 2012. REUTERS/Siphiwe Sibeko

The industrial action at Kumba Iron Ore, a unit of global miner Anglo American, further dented investor confidence in the continent’s wealthiest economy as it showed the protests had moved beyond platinum and gold mines.

Workers at the Kusasalethu mine near Johannesburg, operated by South Africa’s No. 3 bullion producer Harmony Gold, also downed tools in what management called an “unlawful” action launched outside the normal collective bargaining channels.

Zuma is under fire for failing to address and contain the workers’ protests demanding wage increases, which stem in large part from glaring wealth inequalities persisting in South Africa since the end of apartheid in 1994.

As many as 75,000 miners, or 15 percent of the South African mining sector’s total workforce, are already out on strike, while a national truckers’ stoppage is squeezing fuel suppliers. Analysts said if it lasts another week, some petrol stations could run dry and some banks’ ATMs could run out of cash.

Kumba, one of the world’s top 10 iron ore producers, said the wildcat strike at its giant Sishen Mine in the Northern Cape involved only 300 employees and was limited to one area in the open cast mine, leaving most of the facility unaffected.

“The action is being dealt with in line with the Company’s labour relations procedure, with due consideration to the safety of the vast majority of workers who are not taking part in the unprotected strike,” Kumba said in a statement.

Kumba’s share price was over 4 percent lower on the news.

The recent weeks of labour strife, in which around 50 people have been killed, have stirred up criticism of the ruling African National Congress and the presidency of Zuma, who faces a challenge from ANC rivals ahead of a party leadership conference in December.

In another illegal strike over wages by contractors at mining company Petmin, a security guard was hacked to death this week by knife-wielding assailants at the Somkhele mine in KwaZulu-Natal, local media quoted police as saying.

The rand fell one percent in early trade on Wednesday, partly due to the escalation of the mines conflict.

Kumba was regarded as immune to the strike contagion because rank and file employees there in December who had worked for at least 5 years were given a lump sum of about 345,000 rand each after taxes as part of a share scheme.

This represented a fortune to workers earning as little as 7,000 rand a month. But it was not immediately clear if any of the 300 reported strikers were among the 6,200 who had benefited from the plan.

“We thought the share plan meant this would not happen there,” said Gideon du Plessis, the deputy secretary general of trade union Solidarity which represents skilled workers.

Solidarity is not taking part in the strike.

Seven weeks of labour unrest and strikes, which originally erupted at Lonmin’s Rustenburg operations, have now spread across the South African mining industry.

The world’s No. 1 platinum producer Anglo American Platinum is also grappling to resolve a strike at its Rustenburg operations in the country’s “platinum belt” about 120 km (75 miles) northwest of Johannesburg. Worker attendance at Amplats’ Rustenburg mines has fallen to below 20 percent.

Some 21,000 Amplats workers have joined the illegal walkout.

Fifteen thousand miners at Gold Fields KDC West mine downed tools on September 10, hitting production at the world’s fourth-biggest bullion producer. Gold Fields bosses have refused to negotiate with them.

The spreading labour unrest has raised fears the country could see a repeat of the stand-off with police at Lonmin’s platinum mine in August that led to the shooting of 34 miners.

It was South Africa’s bloodiest security incident since the end of apartheid in 1994, and an official commission of enquiry started a probe this week into the killings.

The commission on Wednesday adjourned its hearings until October 22 to give lawyers involved more time to prepare and collect copies of relevant documents and testimony. 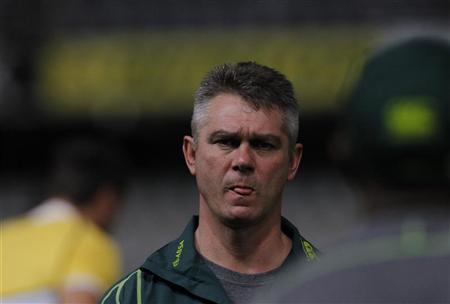 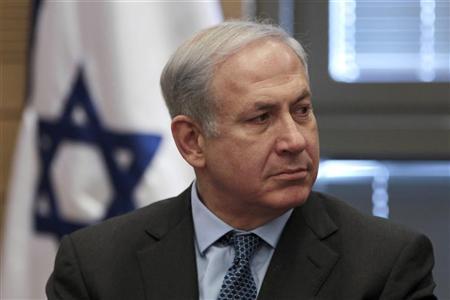