(Reuters) – Investigators on Tuesday searched for the person or group responsible for planting two bombs at the Boston Marathon finish line that killed three people and wounded more than 100 in the worst bomb attack on U.S. soil since September 11, 2001. 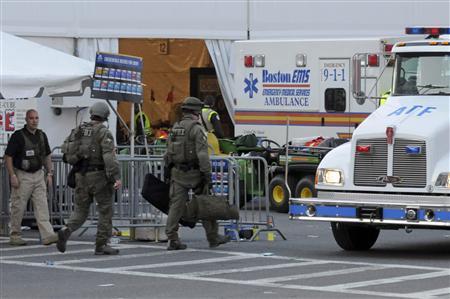 Agents from several federal agencies including the FBI and ATF arrive on scene after explosions near the finish line of the Boston Marathon in Boston, Massachusetts April 15, 2013. REUTERS/Neal Hamberg

The U.S. Federal Bureau of Investigation led a battery of federal, state and local law enforcement agencies on the case, while critically wounded victims of Monday’s blasts fought for their lives and others contemplated a new life as amputees.

The bombs ripped through the crowd at the finish line of the Boston Marathon, shattering the annual civic celebration on the Patriots’ Day state holiday while tens of thousands of people packed the street to cheer on the runners.

The two devices using gunpowder as the explosive were packed with ball bearings and other shrapnel to maximize injuries, said a senior law enforcement official briefed on the investigation who declined to be identified because of the sensitivity of the information.

No one has been arrested in the bombing. A White House official said the case would be treated as an act of terrorism but it had yet to be determined whether the attack came from a foreign or domestic source.

President Barack Obama promised to catch whoever was responsible.

“It is a criminal investigation that is a potential terrorist investigation,” said Richard DesLauriers, the FBI special agent in charge for Boston.

Many runners were heading for the finish when a fireball and smoke rose from behind cheering spectators and a row of flags representing the countries of participants, video from the scene showed.

The two explosions came moments apart some four hours and nine minutes into the race, long after the world-class runners had finished but around the time average contestants were arriving.

“I saw people who looked like they had their legs blown off. There was a lot of blood over their legs. Then people were being pushed in wheelchairs,” said Joe Anderson, 33, a fisherman from Pembroke, Massachusetts, who had just run the race holding a large U.S. flag.

Many of the victims were gravely injured, Massachusetts Governor Deval Patrick said.

Some suffered shrapnel wounds and amputations and will require repeat operations in the coming days, said Peter Fagenholz, a trauma surgeon at Massachusetts General Hospital.

Doctors treated 29 patients including eight who were in critical condition, Fagenholz said.

Many of the seriously injured patients had suffered bone, soft tissue and vascular damage to their legs, he said.

There had been “several” amputations, he said.

“A number of patients will require repeat operations tomorrow and serial operations over the next couple of days,” Fagenholz said.

A 2-year-old with a head injury was being treated at Boston Children’s Hospital, the hospital said in a statement. 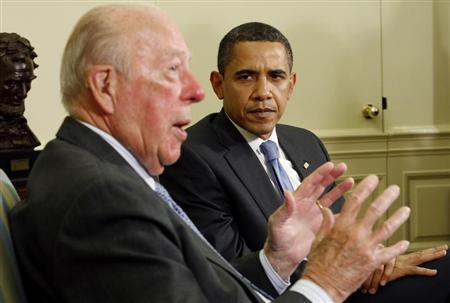 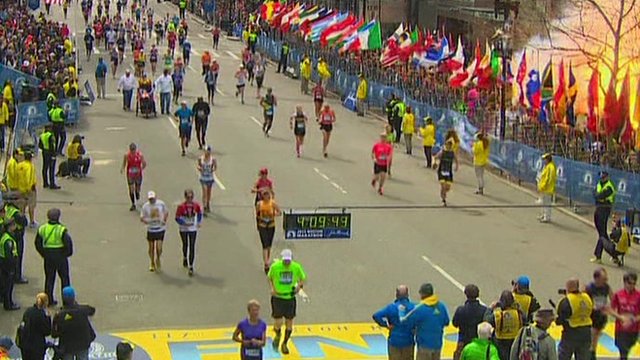