US president also jokes about Jay-Z 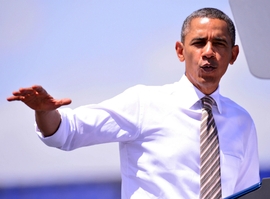 Last night saw a celeb-studded fest for the White House Correspondents’ dinner, and US president Barack Obama had a few cheeky jokes up his sleeve, at the expense of Taylor Swift and his good pal Jay-Z.

The US president, who was called into a Cuban holiday drama involving Beyonce and her husband earlier this month, reportedly quipped: “I’ve got 99 problems and now Jay-Z’s one.”

Katy Perry, Olivia Wilde and Barbra Streisand were just some of the big names attending the dinner in Washington this weekend, and as Obama arrived for his speech, he apparently though DJ Khaled’s All I Do Is Win was an appropriate backing track. He then got a few laughs, as he asked: “How do you like my new entrance music?”

Before adding: ” Rush Limbaugh warned you about this, second term baby.”

During his speech, Obama then turned to Jay-Z and his controversial and highly publicised trip to Cuba, with his wife Beyonce and family. “This whole controversy about Jay-Z going to Cuba; it’s unbelievable,” he said.

With a smile he added: “That’s another rap reference.”

As he neared the end of his lengthy speech, Obama commented on the budget sequester issue and Taylor Swift got a namecheck.

“Republicans fell in love with this thing, and now they can’t stop talking about how much they hate it. It’s like we’re trapped in a Taylor Swift album,” he joked.

Taylor’s music has often been the brunt of many jokes at official ceremonies and events, and she doesn’t seem to have taken them very well. We wonder what she’ll say to Obama.

Celebrity Selena Gomez Wows With ‘Come & Get It&#…
Wildcard SSL