Hijab for a day: Non-Muslim women who try the headscarf

World Hijab Day calls on non-Muslim women to try out life under the traditional head scarf. Can it lead to more religious tolerance and understanding? 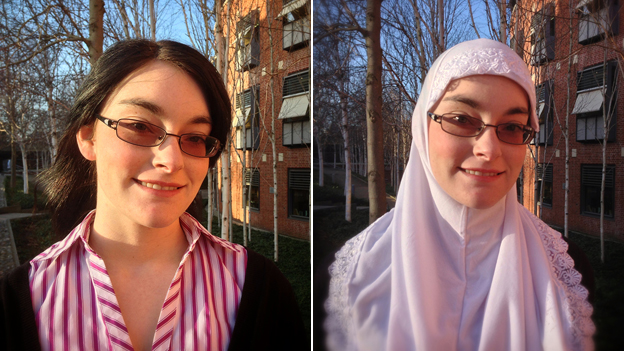 Jess Rhodes, with and without her hijab

“Because I’m not very skilled I’m wearing what you could call a one-piece hijab – you just pull it over your head. But I’ve discovered the scope is endless. There are all sorts of options.”

So says Jess Rhodes, 21, a student from Norwich in the UK. She had always wanted to try a headscarf but, as a non-Muslim, didn’t think it an option. So, when given the opportunity by a friend to try wearing the scarf, she took it.

“She assured me that I didn’t need to be Muslim, that it was just about modesty, although obviously linked to Islam, so I thought, ‘why not?'”

Rhodes is one of hundreds of non-Muslims who will be wearing the headscarf as part of the first annual World Hijab Day on 1 February.

Originated by New York woman Nazma Khan, the movement has been organised almost solely over social networking sites. It has attracted interest from Muslims and non-Muslims in more than 50 countries across the world.

For many people, the hijab is a symbol of oppression and divisiveness. It’s a visible target that often bears the brunt of a larger debate about Islam in the West.

World Hijab Day is designed to counteract these controversies. It encourages non-Muslim women (or even Muslim women who do not ordinarily wear one) to don the hijab and experience what it’s like to do so, as part of a bid to foster better understanding.

“Growing up in the Bronx, in NYC, I experienced a great deal of discrimination due to my hijab,” says organiser Khan, who moved to New York from Bangladesh aged 11. She was the only “hijabi” (a word for someone who wears the headscarf) in her school.

“When I moved on to college it was just after 9/11, so they would call me Osama Bin Laden or terrorist. It was awful.

“I figured the only way to end discrimination is if we ask our fellow sisters to experience hijab themselves.”

Khan had no idea the concept would result in support from all over the world. She says she has been contacted by people in dozens of countries, including the UK, Australia, India, Pakistan, France and Germany. The group’s literature has been translated into 22 languages.

It was social networking that got Jess Rhodes involved. Her friend Widyan Al Ubudy lives in Australia and asked her Facebook friends to participate.

“My parents, their natural reaction was to wonder if this was a good idea,” says Rhodes, who decided to wear her hijab for a month.

“They were worried I would be attacked in the street because of a lack of tolerance.”

Rhodes herself was concerned about the reaction, but after eight days of wearing the headscarf she has actually been surprised by how positive it has been.

The word hijab comes from the Arabic for veil and is used to describe the headscarves worn by Muslim women. These scarves come in myriad styles and colours. The type most commonly worn in the West is a square scarf that covers the head and neck but leaves the face clear.

The niqab is a veil for the face that leaves the area around the eyes clear. However, it may be worn with a separate eye veil. It is worn with an accompanying headscarf.

The burka is the most concealing of all Islamic veils. It covers the entire face and body, leaving just a mesh screen to see through.

The al-amira is a two-piece veil. It consists of a close fitting cap, usually made from cotton or polyester, and an accompanying tube-like scarf.

The shayla is a long, rectangular scarf popular in the Gulf region. It is wrapped around the head and tucked or pinned in place at the shoulders.

The khimar is a long, cape-like veil that hangs down to just above the waist. It covers the hair, neck and shoulders completely, but leaves the face clear.

The chador, worn by many Iranian women when outside the house, is a full-body cloak. It is often accompanied by a smaller headscarf underneath.

“I can’t explain it really but people have been really very helpful, especially in shops,” she says.

Esther Dale, 28, lives in the US state of California and is another non-Muslim trying out the headscarf for the day. The mother-of-three was told about the event by a friend of hers who is a “hijabi”.

As a practising Mormon, Dale understands the importance of faith in daily life, and the judgement that can come with the associated clothing.

She says she knows the stigma that surround the headscarf and hopes this is an opportunity to help combat that.

“I knew that it’s about modesty of behaviour, not just clothing, and that it’s a faulty assumption that women only wear it if they’re forced to – especially in the US. That’s not at all the truth,” she says.

“It’s a good chance to educate people that you can’t make an accurate judgement about someone based solely on what they’re wearing,” says Dale.

The hijab has been a frequent target of criticism from people like Maryam Namazie, a vocal ex-Muslim and campaigner, who sees the garment as a form of oppression.

“Millions of women and girls have been harassed, fined, intimidated and arrested for ‘improper’ veiling over the past several decades,” she wrote in a blog post about the Iranian women’s football team’s hijabs.

“Anyone who has ever taken an Iran Air flight will verify how quickly veils are removed the minute the airplane leaves Iranian airspace.

“And anyone who knows anything about Iran knows the long and hard struggle that has taken place against compulsory veiling and sex apartheid.”

Organisers of this event say they were fed up with seeing the words “oppressed” or “subjugated” when it came to discussing the Muslim head-covering.

They reject the notion that women only wear hijabs at the insistence of a father or a radical member of the family.

This day, then, is about showing the world that women can choose the hijab willingly.

Rhodes says it’s a choice she will continue to make.

“I will wear it from time to time,” she says of her hijab. “I’m saying to the world, my beauty is for my family and my partner. Any woman can wear this.”

Hijab for a day: Non-Muslim women who try the headscarf 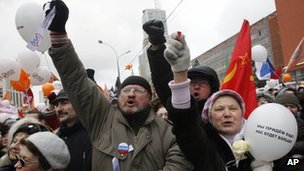 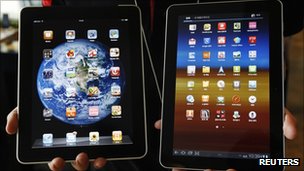