By Philip Pullella and Cristiano Corvino

ROME (Reuters) – This is not a lawyers joke. Italian lawyers have gone on strike – again – and they say that in their struggle for better working conditions and pay they are looking for inspiration to none other than Mahatma Gandhi, the little lawyer who liberated India. 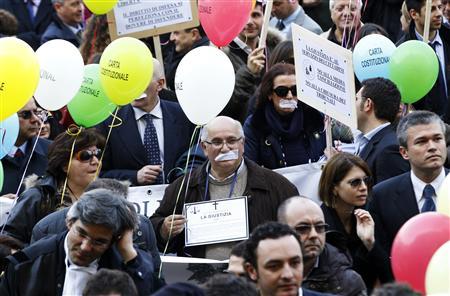 Lawyers take part in a protest in front of the Justice Palace in Rome March 15, 2012. Lawyers' guilds say the reform planned by the government of Prime Minister Mario Monti will only increase legal costs, undermine the protection of the weak, reduce expertise and unleash an uncontrolled market in fees. REUTERS/Alessandro Garofalo

“Lawyers are going through difficult times,” said Maurizio De Tilla, president of the United Lawyers Organisation, as he led a protest of about 2,000 lawyers outside one of Rome’s main court buildings.

“Out of 230,000 of us, more than 100,000 are in difficulty; we have insecure jobs and we are underpaid,” he said, wearing a gold-tasselled, black-and-purple robe and a fluffy white cravat.

Around him, hundreds of other lawyers held up pastel-coloured balloons bearing the words “The Constitution” on them.

While the idea of lawyers striking for job security and better pay might raise chuckles elsewhere, Italy’s lawyers say they are deadly serious.

At the protest that at times resembled a children’s garden party on a warm late winter day, lawyers stood their ground against what they call “savage” plans by Mario Monti’s government to increase competition in their profession.

Lawyers’ guilds say the reforms will only increase legal costs, undermine the protection of the weak, reduce expertise and unleash an uncontrolled market in fees.

“The reforms worsen the situation rather than improving it and that is absurd,” said De Tilla, as a pink balloon floated behind his head.

The lawyers oppose the abolition of minimum fees, which the government says will reduce costs for citizens.

They also oppose plans to extend a fast-track conciliation procedure for minor civil cases — similar to small claims court in the United States — which would not require the use of lawyers.

De Tilla says most lawyers are idealists, not the stereotypical money grabbers or ambulance chasers.

“Gandhi was a lawyer. We want to imitate his way of protesting – silent, well-mannered, civilized but determined – and we shall not stop until lawyers are given back the role and the profile that they have always had,” he said, in tones similar to a summing up speech at a trial.

There were some tense moments later when the lawyers tried to march up the steps of the justice palace and had to be held back by police.

Lawyers are among the most powerful of Italy’s lobbies due both to their political influence and their sheer numbers – there are some 230,000 lawyers for 60 million people, compared to 54,000 in France which has a slightly bigger population.

They are by far the biggest profession represented in Italy’s parliament and critics say they are only trying to protect what many, including consumer groups, see as entrenched and outdated privileges.

But lawyers believe the deregulation measures will undermine professional standards by cutting the length of probation periods for graduates and allowing businessmen to hold a majority interest in legal practices – raising a conflict of interest and undermining the lawyers’ independence.

Italy’s consumer groups have condemned strikes by lawyers, who already held a two-day nationwide stoppage last month, during which some of them taped up their mouths.

The consumer lobbies say competition will be good for ordinary Italians and that lawyers have been at least partly to blame for Italy’s notoriously snail-paced justice system.

The average time taken to resolve a civil case in Italy is nearly seven-and-a-half years and the average to settle criminal cases through a long appeal process is nearly five years.

There is a backlog of nine million cases, 5.5 million of them civil and the rest criminal. The guilty often escape justice simply because time runs out due to the statute of limitations.

Justice Minister Paola Severino said recently that Italy was the fourth most litigious country in Europe, with 2.8 million new cases brought in 2011.